What is Malic Acid

Ensuring that you have enough malic acid in your system is an excellent way to boost your overall health, wellness, and appearance.

What is Malic Acid?

Malic acid is a naturally occurring acid that all organisms produce in their own bodies. The human body produces malic acid when converting carbohydrates to energy. Malic acid is the source of tartness in fruit like green apples. It is found in high amounts in rhubarb, apricots, blueberries, cherries, blackberries, grapes, peaches, and pears. It is also found in citrus fruit in small quantities as per research published by Mikael Suni, Department of Natural Sciences, University of Kalmar, Kalmar, Sweden. In commercial foods, this powerful acid is often used as a flavoring in vinegar-flavored foods and snacks, such as salt and vinegar potato chips. It is also used to flavor sour or tart candies and is added as a preservative to some processed food. [1]

Although the phrase “An Apple a Day Keeps the Doctor Away” doesn’t specifically reference this acid, apples are one of the best sources of this essential acid, which has several health benefits. Most people who eat daily fruits and vegetables get the correct amount of malic acid they need through their regular diet. However, for certain conditions, malic acid supplementation may be recommended. 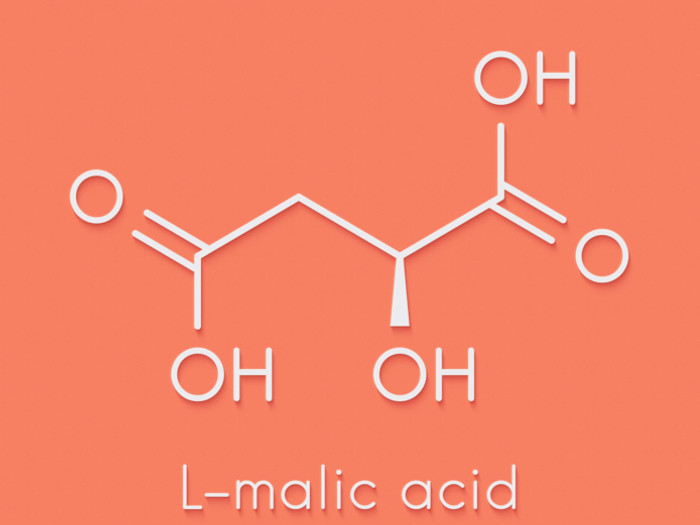 There are many benefits of malic acid, such as boosting skin health, eliminating kidney stones, preventing dry mouth, and improving digestion among others.

As a topical treatment, malic acid is often used to reduce the signs of aging. Malic acid may help the skin stay hydrated and produce more collagen, which boosts elasticity. It is an alpha-hydroxy acid, which removes dead skin cells, helps treats acne, and can remove signs of sun damage. A 2013 study from the Gateway Aesthetic Institute in Salt Lake City, Utah, conducted by Taylor MB et al., showed that a regular topical regimen of this acid and vitamin C helped improve the appearance of abnormally pigmented skin in patients suffering from melasma. [2]

Studies have shown that the high malic acid content in pears, in conjunction with a low-sodium, low-meat diet, may help prevent kidney stone formation. This acid supports the formation of citrate in the body, which can help stop calcium from binding with other elements to create stones as per research conducted in the University of Rochester School of Medicine, Rochester, New York. The citrate created by this acid also stops existing stones from becoming bigger. [3]

Malic acid has been used in various studies as a treatment for the medication-induced dry mouth. An oral spray of 1% this acid has been found in early studies to alleviate dry mouth and encourage saliva flow. [4]

In sports, malic acid is often found in the form of citrulline malate supplements. For cyclists, citrulline malate was found to increase amino acids, natural growth hormone, and insulin levels. It was also found to help improve the efficacy of resistance training and boost endurance, in addition to reducing post-workout muscle soreness.

Many people believe a combination of this acid and magnesium alleviates tenderness, soreness, and pain in patients suffering from fibromyalgia. Magnesium and malic acid both activate ATP production, which provides more energy to cells and consequently more oxygen. Together, this acid and magnesium also counteract aluminum toxicity. Unfortunately, there has not been much further research on treating fibromyalgia and chronic fatigue with this acid, but many people continue to use it as a supplement.

Alpha-hydroxy acids used topically will increase the skin’s sensitivity, especially to sunlight. Ingestion of malic acid may cause indigestion, headaches, and irritation in some people or when consumed in excessive amounts. Some people will experience topical irritation upon application, so always patch test new skin products, and speak to your doctor if you are using this natural treatment in conjunction with any other topical creams or medications.