What Are Poppy Seeds?

The poppy itself is a subfamily of Papaveraceae, which are herbaceous plants grown around the world. The most commonly referred-to species within that subfamily is Papaver somniferum, called opium poppy or ‘breadseed’ poppy. Poppy is believed to have originated in the Mediterranean region but is now grown widely throughout eastern Asia and many parts of Europe. These small flowers produce an edible tiny, kidney-shaped seed known as the poppy seed, also called ‘khus khus’. Poppy seeds can be found on everything from hot dog buns to pretzels and poppy oil is commonly used in salad dressings, soups, and bread and cakes. [1]

The petals of the poppy flower and its seeds are used for medicinal, narcotic, and recreational purposes.  This small, but versatile, seed from this unassuming flower is extremely powerful, and even small doses can have measurable effects on the body. The petals of the poppy flower have an opium-like scent when they are fresh, but odorless when they are dried. The dried petals of certain poppy varieties, like red poppy, are packed with alkaloids and flavonoids, and are used in: 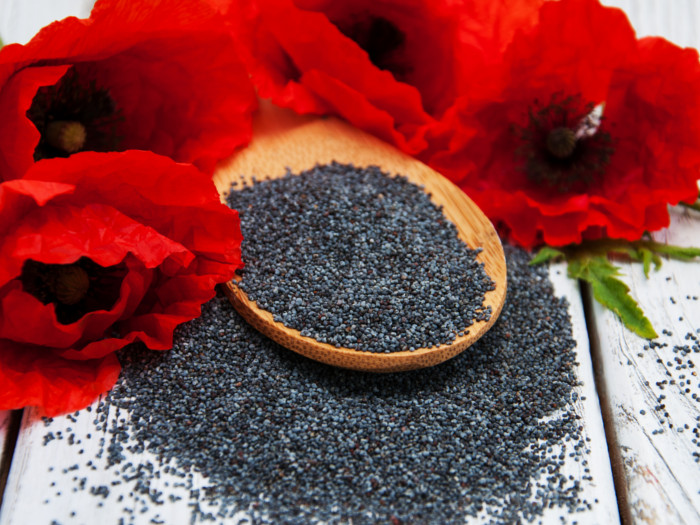 Poppy seeds have a high amount of polyunsaturated fat but are low in cholesterol and sodium. They are a good source of fiber, calcium, iron, magnesium, phosphorus, and potassium. The seeds are packed with vitamins like vitamin C, thiamin, riboflavin, and iron.  Poppy seeds also contain certain alkaloids that can have strong effects on the body in large doses. Morphine (and thus heroin) is derived from the seeds of this plant, so poppy fields around the world are controversial hotspots for conflict. [4]

Let’s take a closer look at the powerful health benefits of poppy seeds.

The most widely studied and utilized aspect of poppy seeds is the analgesic qualities that it provides. Morphine is one of its primary active components, and as you probably know, this is a powerful pain reliever – one of the strongest used in hospitals. If you consume its seeds, you can soothe small aches and pains, relieving headaches, and even speed up healing. The rich combination of nutrients found in poppy seeds, including zinc, can help increase the metabolism to accelerate the recovery process. [5]

The antioxidants and the high amount of linolenic acid in poppy seeds help in maintaining a glowing complexion. A paste made of the seeds with either milk or water helps moisturize the skin, giving it a glow. When a few drops of lemon juice is added to the paste, it can be used to get relief from itchiness, eczema, burns, or any kind of skin inflammation. If you add yogurt to the ground paste, it can be used as a face mask to exfoliate the skin as well as to reduce blemishes. [6]

Poppy seeds are a great source of unsaturated fatty acids and minerals such as calcium, zinc, and magnesium, all of which contribute to shiny, healthy hair. A paste made from these tiny seeds with water or milk, when mixed with olive oil, can help promote hair growth and get rid of split ends.

Dandruff, which can lead to hair loss, can also be treated with a poppy seed paste pack. A natural remedy is to blend the paste with yogurt and a teaspoon of pepper. Apply it directly on the scalp, leave it on for half an hour, and then rinse. Regular use of this pack will help eliminate dandruff and maintain hair health.

According to a study, opium poppy seeds are effective in inducing sleep and poppy seed tea before bedtime or a drink of poppy paste mixed with milk can help you sleep better. Poppy seeds have a high number of alkaloids which lower the body’s cortisol levels and reduce stress. Exercise caution in the amount of tea you have due to the morphine element in it. It is best to consult your doctor before giving it to children. [7]

Studies have directly linked zinc to an improvement in the strength of the immune system. This mineral, found in significant levels within each poppy seed, can stimulate the production of white blood cells and boost the body’s response to foreign substances and agents. [9]

One of the other key minerals found in poppy is iron, an integral component in the production of red blood cells. By increasing your iron intake, you can boost blood flow, thereby increasing the oxygenation of vital parts of your body. This can reduce symptoms of anemia, boost energy levels, and speed up the healing process. [10]

If you are suffering from constipation or diarrhea, you need fiber in your diet. Poppy seeds have a surprisingly high level of dietary fiber, which can help to bulk up the stool or promote peristaltic motion to regulate your bowel movements. They have been directly linked to soothing inflammation and pain, thereby promoting normal functioning in your gut. [11]

Poppy seeds are known to be rich in zinc. Adding zinc to your diet could have a protective effect against diabetes. [12] [13]

As we age, our eyes naturally begin to fail us, but there are certain things we can do to stop this process. Antioxidant compounds are one great way to protect our eyes, but so is zinc, found in significant quantities in poppy, which can reduce the occurrence of macular degeneration and keep our vision strong. [14]

Many people fail to realize the many roles that calcium plays in our body, but when it comes to the functioning of our nervous system, few minerals are more essential. The high levels of calcium found in poppy make it a very impressive nerve tonic and can help prevent nervous disorders and promote healthy function. [15]

Calcium is also an integral aspect of bone mineral density, so the calcium in poppy can ensure that our bones stay strong and resilient as we age, rather than slowly weakening as a result of osteoporosis or other bone-related disorders. [16]

The analgesic and anesthetic qualities of poppy can protect heart health in another way. The potassium found in the seeds acts as a vasodilator, easing the tension in arteries and blood vessels while promoting normal blood flow throughout the body. This can help prevent the development of atherosclerosis and the subsequent heart issues, like strokes and heart attacks, that can so often result. [17]

Word of Caution: It is very important to remember that poppy seeds do contain very strong components in higher than average levels. Although eating too many hot dog buns is not the same as taking a morphine pill, depending on the preparation of poppy oils and other extracted varieties, use with extreme caution, and only use the seeds and extracts from trusted herbalists and alternative medical practitioners. Use of poppy and its seeds are banned/restricted by some countries such as UAE, Dubai, and Saudi Arabia so consult your local health specialist before use.

Rate this article
Average rating 4.0 out of 5.0 based on 113 user(s).
Read This Next:
Popular Articles