Drinking Russian tea has been a popular part of Russian culture for hundreds of years, but now this tea style is becoming more common in other parts of the world.

What is Russian Tea?

Russian tea is not a precise type of tea, but rather a method of mixing, preparing, and serving. The tea itself is typically a blend of herbal tea and black or green tea, much of which was imported from China to Russia when tea first became popularized by the czars. The long caravan journey gave the tea a smoky flavor, due to the campfires, and that flavor is still mimicked today in this variety. 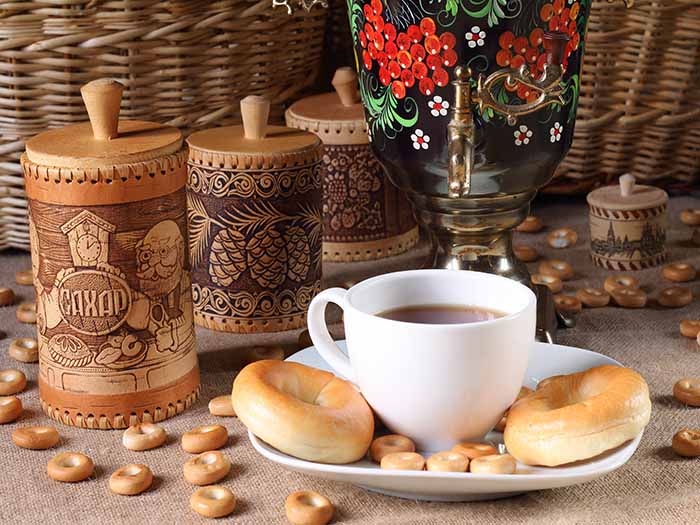 In parts of America, there is also a beverage called Russian tea, and it is often consumed around the winter holidays. It is a combination of black tea, orange juice, cinnamon, and cloves. Despite the name, there is no clear link between this American beverage and the Russian style of tea.

How to Make Russian Tea?

If you want to make Russian tea for yourself, you can prepare it in a number of ways, with ingredients like lemon, honey, jam, orange juice, and herbal black or green teas.

Although this recipe specifies 7 servings, it would depend on how strong you like yoru tea. The more tea leaves you use for the concentrate and the longer you brew the tea, the stronger will be your brew. You can later adjust this by diluting the brew as per taste.

The benefits of Russian tea primarily come from the herbal preparation and the black tea or green tea that you included. This tea is known to help with weight loss efforts and can reduce cholesterol, as well as prevent tooth decay and promote the growth of strong bones. Due to the antioxidants found in black and green tea, you can prevent oxidative stress in various parts of the body, and encourage healthier skin. This tea can also give a boost to the immune system, helping to fend off everything from the common cold to more serious infections.