Sherry is a popular alcoholic beverage and to many of its aficionados, it is one of the most underrated wines in the world. Sherry can be made with different kinds of grapes and using various production methods, which is why its characteristics cannot be generalized.

Sherry is a form of fortified Spanish wine using specific white grapes that are grown in Andalucia, a region in southern Spain. Initially, the production process for sherry is very similar to wine, in that the grapes undergo a fermentation process. Following this, however, the wine is fortified with great spirit, which increases the final alcohol content. Most sherries are considered to be quite dry, although some of the most popular forms are sweet. In some varieties of this alcohol, different wine vintages are blended together before the fortification process, so there is not a clear vintage year for most varieties of sherry. Sherry can be served as an aperitif, or with a meat or cheese platter, and sometimes, even as a dessert wine. [1]

In terms of content, most varieties of sherry top out at about 17% ABV. While some sherries are stored in cask barrels for up to 30 years, once they’re bottled, the aging process stops. After opening a bottle of this alcohol, it should normally be consumed in the first day or two, although some varieties will last for up to one week when refrigerated. [2] 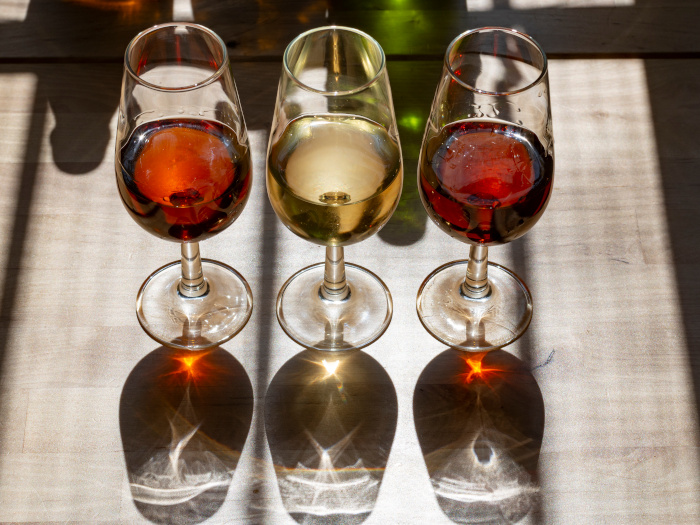 There are quite a few different types of sherry, and they mainly differ in the types of grapes used and the production process applied.

In terms of nutrition, this fortified wine provides roughly 90 calories per 100-gram serving, as well as very low levels of carbohydrates and protein. This is in addition to negligible amounts of iron and calcium. There are also a number of antioxidants and active ingredients present in this alcohol, similar to those found in wine.

There are potential health benefits associated with drinking this beverage, in moderation, including its ability to reduce your risk of cardiovascular diseases and increase blood circulation.

However, these are not science-backed and are based mainly on anecdotal evidence. One study on moderate sherry intake and cholesterol levels was published in the Journal of the Science of Food and Agriculture. Researchers in Spain found that the polyphenols in red wine, which are associated with reducing the incidence of coronary artery disease, are also found in sherry. [6]

Alcoholism and binge drinking is detrimental to your overall health and can undo any possible good things that moderate amounts can impart.

If you are storing sherry at home, be sure that the bottles are sitting upright in a cool dry place.

Always consume alcohol in moderation. As with any alcohol, there are a number of side effects when sherry is consumed in excess, including the following: [8]

According to the Centers for Disease Control and Prevention, people who should not drink alcohol include women who are pregnant, individuals younger than 21 years of age, and people who are recovering from alcoholism or cannot control the amount they drink. Also, it should be avoided by people who are planning to drive or any other activity that required focus and skill. However, different countries have different rules on alcohol purchase and consumption. [9]

Also, cooking with alcoholic beverages results in only some loss of alcohol content. Foods baked or simmered in alcohol can retain anywhere from 4 percent to 85 percent of the alcohol, according to a study by the U.S. Department of Agriculture’s Nutrient Data lab. [10]

Rate this article
Average rating 4.7 out of 5.0 based on 5 user(s).
Read This Next:
Popular Articles