Star anise substitutes are relatively easy to find in your own spice rack, although the specific flavor it imparts may be difficult to emulate.

Star anise is a small, star-shaped fruit native to China and Japan. The five-pointed pods of the star anise tree are picked early, dried, and can be found either whole or ground. The taste of star anise is very heavily in the licorice realm, even more so than common anise. In Chinese, Vietnamese, and Japanese cuisine, it is often a seasoning in meat and poultry dishes, especially duck. In cooking, it is more often found as a flavoring for sweets, compotes, and in anise-flavored liquors. [1]

If you can’t find star anise in your local spice section, there are a few different star anise substitutes such as common anise, fennel, allspice, Chinese five spice, and clove that will help preserve the unique flavor of your recipe.

Anise is not actually related to star anise, instead, it belongs to the carrot family. However, it has a similar licorice flavor. Instead of star anise’s signature star shape, common anise is a small, brown-striped seed. Common anise is much milder than star anise, so you may need to use almost twice as much. [2] 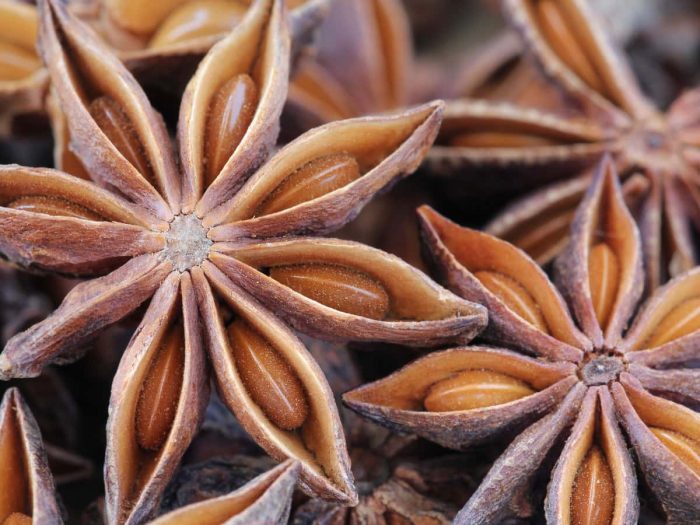 Another member of the carrot family, fennel also has a licorice taste, but these little seeds are much milder and sweeter than star anise. Due to the sweetness, using fennel may not be appropriate for all savory dishes, especially in Asian cuisine. However, for dessert or baked cakes or bread, fennel is a great substitution. If you have both fennel and anise, try mixing the two together to achieve a more pungent flavor.

Chinese five spice is a spice blend that you can usually find pre-mixed in the spice section. Star anise is the strongest flavor in this popular blend, but be careful what recipes you are using it in as a substitution. Chinese five spice also contains Szechuan peppercorns, cinnamon, clove, and fennel, so this will not be appropriate in sweeter dishes, but works very well in savory ones. [3]

Allspice can be used in a pinch, but it does not have the same licorice flavor as star anise. It does provide some of the same bitter strength and pungency, with sweetness, so this is a good option, particularly in savory meat dishes. Try adding a bit of sugar with the allspice.

Another spice with a lot of depth, clove will not have the heat or licorice taste of star anise, but like allspice, it will add sweetness and some coffee notes to your dish. [4]

Rate this article
Average rating 3.2 out of 5.0 based on 6 user(s).
Read This Next:
Popular Articles