Sucralose is an artificial sweetener that is popular for those following a ketogenic diet. However, there may be some potential health risks associated with this popular alternative.

Sucralose is a sugar substitute that is produced through the chlorination of sucrose. Three hydroxyl groups on the sucrose molecule are replaced by chlorine atoms, resulting in a sugar replacement that is approximately 600 times sweeter than normal sucrose! Interestingly, our bodies can only absorb a small percentage of sucralose (10-15%), while the rest passes right through our system after providing a sweet flavor to foods. Since this substance isn’t absorbed by the body, it doesn’t contribute to your carbohydrate count for the day. As an artificial sugar, sucralose is a low-carb option for people who want to control their blood sugar or follow a ketogenic diet. [1]

Sucrose is a natural sugar found in many fruits, such as pineapples and apricots.

A ketogenic diet is basically a low-carb, high-fat/protein diet that provides ketones for energy, rather than depending on blood glucose (sugar) for energy generation. People following this kind of diet have to adhere to a strict restriction on their carbohydrate intake, measuring their foods down to the gram. Natural sweeteners, artificial sweeteners, and sugar alcohols are commonly used in lieu of traditional sugar. Sucralose is an artificial sweetener that is believed to keep the body in ketosis—the state of generating ketones as usable energy, rather than glycolysis. [2]

However, recently there have been some concerns about whether sucralose is the best option in a ketogenic diet. Studies have found that a small percentage of this substitute is, in fact, metabolized by the body, as explained in this article in Food and Chemical Toxicology. This means that this alternative sweetener can slightly alter blood sugar levels. That being said, operating in ketosis is a somewhat flexible state for the body. A slight increase in carbs (a gram or two) will usually not damage your progress with the diet, nor force you to go through the ‘keto flu’ again. [3] 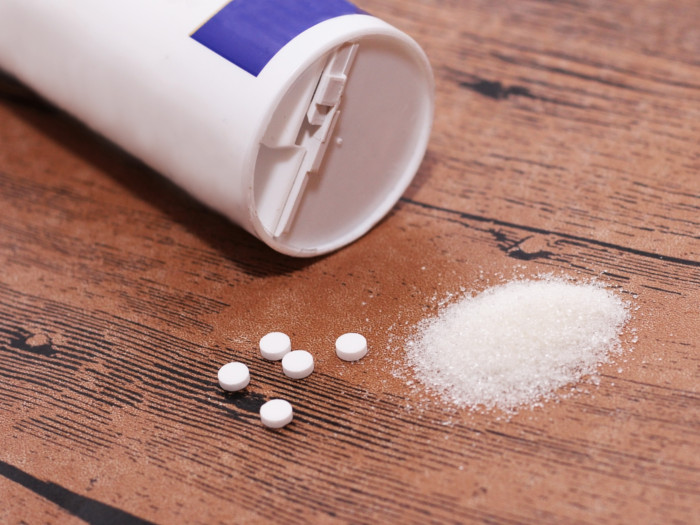 Are low-cal sweeteners good for you? Photo Credit: Shutterstock

One of the main applications of sucralose, and the product you have likely seen the most often, is in Splenda packets. This is one of the most popular and widespread sugar substitutes in restaurants and kitchens around the world, and sucralose is the main ingredient. You will also find this sugar substitute in condiments, canned fruit, dairy products, sauces, syrups beverages and other food items that are often stored for long periods of time, but must retain their sweet flavor. Sucralose is also a popular sugar substitute in desserts and baked goods. As a sweetening agent in baked goods, sucralose remains stable at relatively high temperatures (350 degrees Fahrenheit and below). [4]

There are some potential side effects associated with sucralose, including elevated blood sugar and insulin levels for those who are not used to consuming artificial sweeteners. After regular use of such substitutes, it appears to have less and less of an effect. Additionally, research has found that significant levels of sucralose can potentially damage the bacterial environment in your gut. This can impact your gastrointestinal health by reducing beneficial bacteria levels. [5]

Is Sucralose Bad For You?

Many experts and manufacturers swear by the benefits of sucralose, but some questions remain about its safety and efficacy, particularly with other natural sweeteners like Stevia on the market. Research has shown that it is generally safe for its intended use, but that doesn’t mean it is the best option on the market. As mentioned above, studies have found that the use of this substitute can affect blood sugar and insulin levels, in some cases. [6]

Furthermore, while this sweetener may lower your carb and calorie intake, Splenda is also a source of dextrin and maltodextrin. These act as bulking agents and have a carbohydrate load to consider if you’re on a ketogenic or low-carb diet. Finally, cooking with this sugar substitute at temperatures above 350 degrees could be dangerous, as this sweet compound can interact with glycerols (found in fats) to produce chloropropanols—a class of potentially toxic chemicals.

Generally speaking, there are plenty of other natural and alternative sweeteners that don’t come with as many potential health risks or uncertain benefits.