Finding appropriate sugar substitutes can be a major boost to your health, and also give your recipes a unique touch they may have been lacking.

Recipes that call for sugar are usually referring to common refined white sugar, unless they note otherwise. Raw sugar is a sucrose that is made by processing sugar cane or sugar beet juice. The dark molasses is then taken out, leaving refined white sugar behind.

There are many reasons people look for sugar substitutes, but primarily it is for the health benefits. There are several healthier alternatives that can help you cut sugar and calories from your favorite recipes, such as honey, stevia, xylitol, erythritol, and yacon syrup among others.

Honey is the byproduct of honey bees, and traditionally, the first thing people reach for when they are cutting sugar from a recipe. Fair warning, however, honey is still made with fructose, and so technically is still a sugar. It should be consumed in small amounts. However, several studies have linked honey to a number of surprising health benefits, such as lowering cholesterol and decreasing inflammation. If you are looking for a lower glycemic index score, stick to single flower honey, such as cotton or orange blossom.  [1] 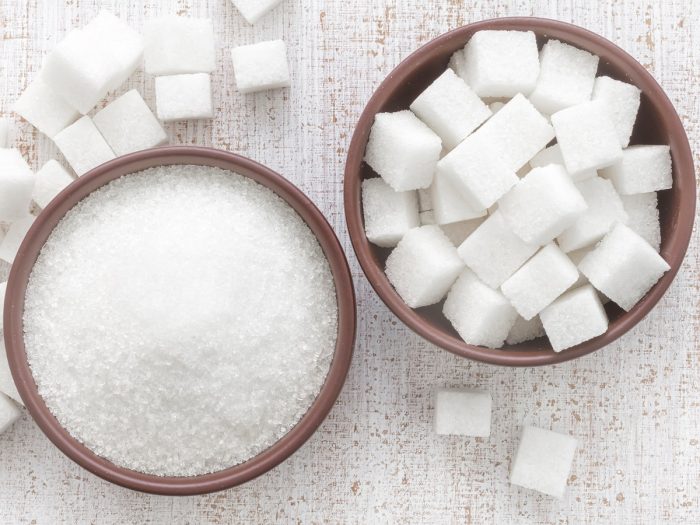 Stevia is a natural sweetener that has grown significantly in popularity over the past decade. Extracted from the leaves of a South American shrub, stevia has no calories and no known side effects. Depending on the brand, the sweetness of stevia can vary.

Xylitol is a sugar alcohol derived from birch wood or corn. It has significantly fewer calories than refined sugar, and has been shown to promote dental health and help the body absorb calcium. [2]

It also has the benefit of not increasing blood sugar levels or insulin. However, eating too much xylitol can cause digestive problems, so use this in moderation.

Erythritol is another sugar alcohol. It occurs naturally in certain foods, but commercially, it is usually made from mashed, fermented corn or wheat starch. It has far less calories than sugar, and less than most of the sugar substitutes. Erythritol will not raise insulin or blood sugar levels, and has no known health detriments. [3]

Yacon syrup is a relative newcomer, having been made recently popular as a weight loss supplement, although there is not enough research to back that up. Yacon syrup has about one-third of the calories of sugar. It cannot be used for baking, but is a great sugar alternative as a sweetener for drinks or as a dip. [4]