Using yarrow in various forms can have countless health benefits, but it is important to understand how to use it before you can enjoy its effects.

Yarrow is a perennial herb scientifically known as Achillea millefolium, and nearly every part of the plant is useful from a medicinal standpoint. Native to many areas in the Northern hemisphere, the use of this herb dates back thousands of years – even to ancient Greek legends. There are many common names for this herb, including old man’s pepper, the nosebleed plant, milfoil, soldier’s woundwort, and Thousand-seal, among others. Both the leaves and flowers of the yarrow plant are edible, as are the stalks, which can be crushed into a topical salve. [1]

Yarrow leaves have a peculiar smell that is slightly spicy or peppery, particularly when they are crushed to release their aromatic compounds. Native Americans and ancient Britons used this herb extensively, and it is also present in Chinese traditional medicine, largely as an astringent substance. However, it remains one of the most versatile and recommended herbs in natural healing around the world. [2] 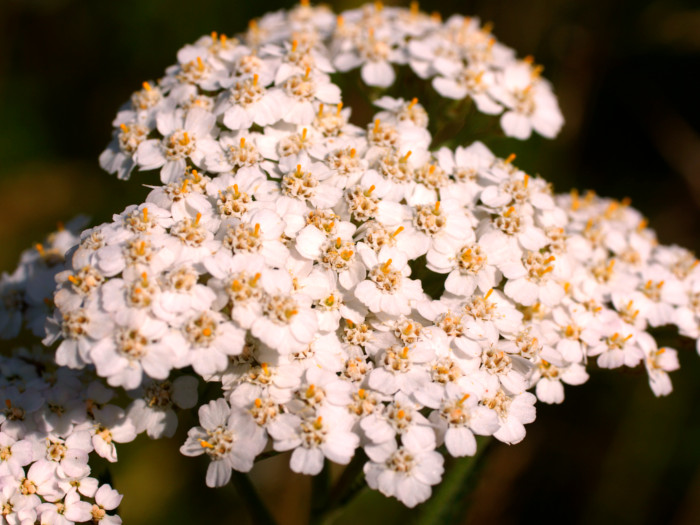 The nutritional profile of yarrow includes a variety of flavonoids, rutin, and tannins, as well as coumarins, saponin, cineole, lactones, eugenol, terpineol, and other antioxidants. Furthermore, this herb can provide iron, phosphorous, and sulfur from its leaves. [3]

The many health benefits of yarrow include the following:

Famed for its ability to heal all of Achilles’ wounds in Greek myth, this herb is known to speed the healing process of topical wounds. [4]

When used in moderation, this herb is able to stimulate blood-clotting, making it quite valuable for acute injuries; however, in excess, this herb can act as a blood-thinner in the body, so caution should be taken.

If you are struggling with maintaining a regular period, the use of this herb, particularly in tea form, can help to increase regularity and protect your reproductive health. [5]

Since ancient times, this herb has been used to lower stress hormones and induce a feeling of calmness in the body and mind. [6]

If your breasts are producing too much milk, to the point where the condition is painful, topical or oral ingestion of this herb is known to clear up the symptoms. [7]

This herb has long been used to reduce inflammation in various parts of the body, including symptoms of arthritis, gout, and irritable bowel syndrome. Both topical and oral use can help to relieve these issues. [8]

Yarrow is known to stimulate the release of gastric enzymes and bile, which can speed the digestive process and reduce symptoms of constipation, bloating, cramping, and diarrhea. [9]

Research has found that the regular use of yarrow can help to modulate blood pressure, which can lower your risk of atherosclerosis, heart attacks, strokes, and coronary heart diseases. [10]

There are many impressive uses of yarrow, including in cooking, as an herbal substitute, in vinegar oils and for cosmetic use, among others.

Side Effects of Yarrow

While there are many positive benefits of yarrow, there are a number of side effects to consider, including the following:

Since yarrow can slow blood clotting in some cases, so for those with bleeding disorders, it can be dangerous, as well as those undergoing surgery. Negative interactions with drugs that induce drowsiness, treat high blood pressure, reduce stomach acid or thin the blood may also occur, so speak with your doctor before adding this herbal remedy to your health regimen.

Rate this article
Average rating 3.6 out of 5.0 based on 13 user(s).
Read This Next:
Popular Articles