What is Yellow Watermelon & How is it Different From Red Watermelon

For those who have never eaten a yellow watermelon. It may sound like a made-up fruit by the haters of red watermelon! However, this unusually colored melon variety is very real, and packs quite a nutritious punch!

What is Yellow Watermelon?

It is a natural variety of watermelon that has experienced a genetic mutation in which it does not produce any (or very low levels of) lycopene. [1]

These yellow varieties of watermelon are actually the original form of watermelon and were first cultivated in Africa. According to a study in the Journal of Food Composition and Analysis, lycopene is the compound that gives color to many popular fruits and vegetables such as tomatoes and red watermelon. It wasn’t until these fruits were made into more popular commercial fruits that they were bred for higher lycopene content. [2]

The taste of a yellow watermelon is slightly sweeter than its red cousin, and almost has tastes of honey or apricot in the delicious flesh of the fruit. The rind of these watermelon goes deeper into the fruit, but the uniquely colored and flavorful flesh makes it worthwhile.

Yellow watermelons contain many of the same nutritional properties as normal red watermelon, with some notable differences. Recent research suggests that these watermelons contain high levels of vitamin A and vitamin C – 18 percent and 21 percent of your daily requirements, respectively, in each cup of this fruit. There are less than 50 calories in a one-cup serving, as well as moderate amounts of potassium and sodium. While red watermelon is high in lycopene, yellow-colored watermelons are high in beta-carotene, another very powerful antioxidant often found in sweet potatoes and carrots. [3] [4] 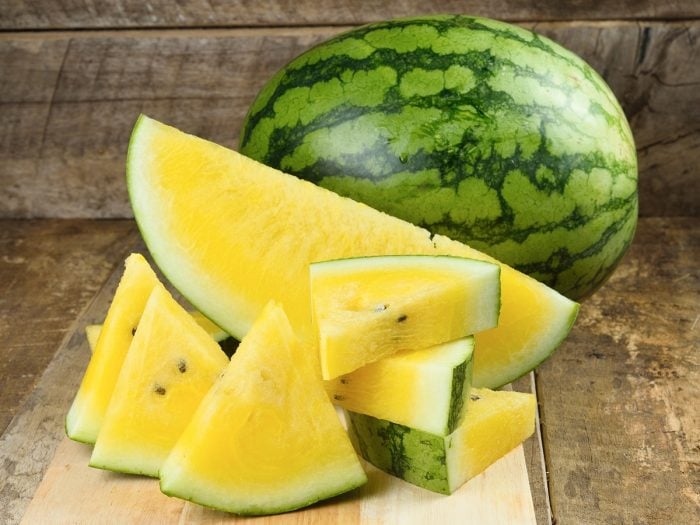 There are many uses for yellow watermelon, largely the same as red watermelon. [5]

If you plan to keep yellow watermelon for a longer period of time, it is important to know the proper way to store them.

Before cutting this type of watermelon, be sure to wash the rind thoroughly, as they are prone to retain some residues of plant chemicals and pesticides. Sliced yellow watermelon can also be stored in the refrigerator for 3-5 days, but will begin to lose some sweetness and juiciness after that point.

Taste: Similar to that of a red watermelon – a subtle tinge of honey

If you are at the local grocery store searching for a wholesome, ripe yellow watermelon, check for melons that are creamy and have a yellowish spot on the rind. A ripe watermelon, yellow or red, should feel slightly heavy also making a hollow sound if you lightly thump it.

Watermelons are usually the yummiest during summers, but that should not deter you from picking a yellow watermelon at any time.

Rate this article
Average rating 4.0 out of 5.0 based on 272 user(s).
Read This Next:
Popular Articles