Beef broth, also known as beef stock, is a liquid made from simmering beef bones with carrots, celery, onions, herbs, and vinegar in water over a long time. It is known to be rich in flavor and gives a delectable boost to soups, stews, and curries. You may be cooking up fingerling potatoes, or using beef broth to add flavor to rice, grains, or couscous. Beef broth may contain a savory umami flavor that we crave, and homemade beef broth is high in iron, calcium, and amino acids, which promote a healthy gut, bones, and immune system. [1]

If you don’t have a carton of broth on your shelf, or 24 hours to simmer your own broth, don’t worry! There are several great substitutes that will taste just as good, such as vegetable broth, chicken broth, bouillon cubes, soy sauce, beer, and red wine among others. The flavor may not be the same, but you will get a better result than plain water. But some substitutes are made better than others. 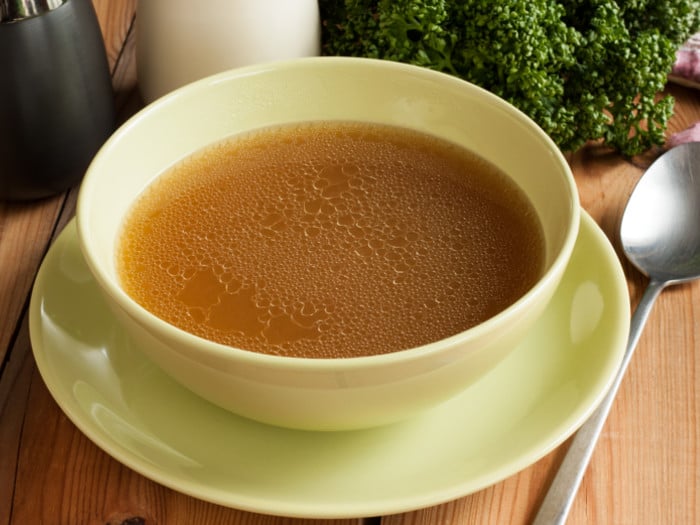 Vegetable broth is perhaps the best substitute for beef broth and may usually work even better than chicken broth. The store-bought broth is readily available, but if you are making your own broth, this is as cheap and easy as it gets. Save all your veggie scraps in the fridge or freezer. Sauté them in a large pot and then cover and simmer for a few hours. Always use onion skins, carrot scraps, and celery tops, then try a healthy handful of mushroom stems, kale ribs, or even peppers for different flavors. Strain with a cheesecloth and use in place of beef broth for a dynamic boost. [2]

To use: To substitute for beef broth, use one for one. In other words, a cup of vegetable broth will work in place of beef broth.

Chicken broth can be purchased or made at home in the same way as beef or vegetable broth. It will give you the flavor boost you’re seeking. Homemade broth may also deliver certain health benefits, such as reducing cold and flu symptoms, improving bone health, and acting as an anti-inflammatory agent.

To use: Like vegetable broth, chicken broth is also a perfect 1:1 substitute. Use in equal amounts to the beef broth as mentioned in the recipe.

Making broth regularly can be a tedious process. This is why bouillon cubes are a great substitute. It’s a good idea to keep some at home as your emergency stash if you cook regularly. Needless to say, beef bouillon cubes are meant to be used in place of beef broth. But chicken and vegetable cubes can also be used if you don’t have the beef cubes at hand. The sodium content will be higher, but you’ll get a major flavor boost. [3]

To use: The usual method is to dissolve 1 cube of bouillon cube in 1 cup of boiling water. This will give you a cup of broth. Do keep in mind that bouillon cubes can be quite salty. So, you may want to adjust your recipe accordingly.

These options will work in a pinch if you have none of our other substitutes at hand. Soy sauce, Worcestershire sauce, and liquid amines have an umami flavor that can work in place of beef broth. But because these have a distinct flavor, these will work in only some recipes, but not all.

To use: These are concentrated flavors. Hence, a little goes a long way. Add a tablespoon of any of these flavoring liquids to a cup of vegetable broth or water to substitute for the umami flavor found in beef broth.

A mix of water, beer, or wine can be a good substitute for beef broth. Use it in stews, or to deglaze a pan to make a delicious and complex sauce or gravy. Most of the alcohol will evaporate during cooking, leaving an exciting flavor behind.

To use: To substitute, use an equal amount for the beef broth. In other words, use a cup of beer or wine for a cup of broth.

Rate this article
Average rating 4.1 out of 5.0 based on 91 user(s).
Read This Next:
Popular Articles