One of the strangest symptoms for expecting mothers is pregnancy cravings, which can take a number of strange forms, and may puzzle their family, friends, and partner. However, pregnancy cravings are completely normal, and may actually indicate a type of nutrient that the body genuinely needs. Your undeniable urge may be for a cheeseburger, a pickle, ice cream or lasagna with chocolate sauce, but that is likely a signal from your body that you shouldn’t ignore!

For pregnant women, who will undoubtedly experience some type of craving over the course of their term, it is important to understand where these cravings come from, as well as how to manage them. [1]

What do Pregnancy Cravings mean?

Although there has not been definitive scientific agreement on the cause of pregnancy cravings, it is believed that an overwhelming craving for a specific food is based on a perceived nutrient deficiency by the body. In other words, if your body detects a drop in potassium that could be dangerous for your blood pressure, it may generate a craving for bananas – a potassium-rich fruit. Similarly, a sudden desire for potato chips or popcorn may indicate a lack of sodium in the body – another important electrolyte. [2]

The strangeness of pregnancy cravings, however, appears when the foods are combinations that you might never normally make, such as a toast with ranch dressing, peanut butter, and spinach sandwiches, or an anchovy pizza. Researchers explain that these unusual desires are due to drastically fluctuating hormones in a pregnant woman’s body. More specifically, the increase in beta Human Chorionic Gonadotropin hormone and progesterone can significantly affect how the body reacts to certain foods. This hormonal surge can actually alter the senses of both taste and smell, making certain foods inexplicably desirable, while making common foods – even your favorite ones – nauseating to even think about. [3]

Whatever the reason for pregnancy cravings may be, sometimes the only way to get rid of them is to simply give in and eat whatever unusual food your body is demanding. As strange as it may seem, it could be precisely what your body needs at that moment. 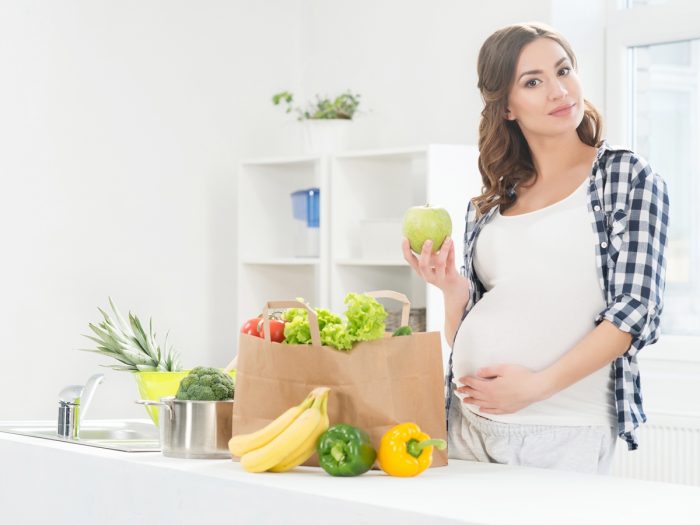 When Do Pregnancy Cravings Start?

Pregnancy cravings can begin within the first few weeks following fertilization. Once the egg implants on the uterus wall, hCG will be released, and the hormonal fluctuations of pregnancy begin. In some cases, one of the first symptoms of pregnancy for women is their unexplained desires for unusual foods. These cravings can last throughout your pregnancy and are typically most noticeable in the first and third trimesters. [4]

That being said, it is just as normal for women not to experience pregnancy cravings of any kind. Due to the unique metabolic and hormonal profile of every person, there is no way to predict whether or not you will have these cravings, even based on your previous experience with earlier pregnancies.

There are a few very common pregnancy cravings, including pickles, eggs, bacon, cheese, chocolate, and ice cream, among many others.

Pickles – One of the most famous pregnancy cravings, the desire for pickles is likely tied to their high sodium content, which is often found to be lacking in pregnant women.

Bacon – Rich in protein and fat, bacon is an obvious craving, allowing the body to satisfy two nutrients with one food. [5]

Cheese – Many pregnant women become deficient in calcium, leading to a consistent desire for cheese; however, there are plenty of vegetables that can also deliver your body’s calcium supply!

Ice Cream – With high levels of calcium and fat, this is what your body may crave if it is feeling weak or low on energy.

The danger with pregnancy cravings, of course, is the consumption of unnecessary calories from unhealthy food sources. While it is recommended that women increase their caloric intake by an average of 300-400 calories per day, a mindless indulgence of your pregnancy cravings can increase your risk of gestational diabetes, excess weight gain during pregnancy, and gestational hypertension, among others.

Therefore, rather than opening another box of cookies, it is best to seek out healthy alternatives, such as exercising, planning your meals ahead of time, shrinking your portion size, and substituting similar foods.

Although strenuous exercise is not recommended during pregnancy, moderate exercise can keep you in shape, and also take your mind off those annoying cravings. More importantly, it will help you burn off some excess calories so you don’t feel so guilty about that midnight ice cream raid of the freezer. [6]

If you shop wisely, you can schedule your meals for the days or weeks ahead, leaving less room for unplanned meals and sporadic snacking. If you supply your body with the nutrients it needs, you are less likely to experience random desires for strange foods to fulfill your body’s nutritional demands. [7]

Altering your portion size can be very important during pregnancy, particularly if you find yourself constantly hungry throughout the day. When you do decide to indulge in one of your cravings, have one bar of chocolate instead of two, limit yourself to 2-3 cookies, and don’t gorge yourself on an entire pizza. Cravings are acceptable, but only in moderation. [8]

In some cases, finding food substitutes is the safest way to satisfy your desire, without giving in to an unhealthy diet. If you are hungry for a cheeseburger, try a grilled portobello mushroom with provolone cheese. If you can’t stop thinking about donuts or cupcakes, fix yourself a whole-grain bagel with blueberry cream cheese. [9]

Word of Warning – While indulging your unusual pregnancy cravings is perfectly normal, there are reports of even more unusual cravings, such as non-food items. This condition is known as pica, named for a bird who will eat almost anything, and is characterized by the desire for such unsavory things as dirt, chalk, clay, rocks or brick. Obviously, it will be unwise for any expecting mother (and thus her fetus) to consume these substances, regardless of how strong any craving might be. [10]

Rate this article
Average rating 4.7 out of 5.0 based on 3 user(s).
Read This Next:
Popular Articles