These may be considered rather boring in terms of the vegetable world, but white potatoes actually contain a great deal of soothing, anti-inflammatory chemical, in addition to the large amount of starch. Potatoes are easy on the digestive system, but remember that grease isn’t, so avoid fried potatoes if you’re using this for a diverticulitis cure. Stick to baking, mashing, or broiling those potatoes to give your colon that much-needed rest. [1]

Fruit is widely considered a booster for digestive health, but there is a peculiar combination of nutrients and organic compounds in papayas and pears that make them ideal for improving the quality and comfort of your large intestine. The fiber found in fruit, combined with a major influx of vitamins and minerals, make any fruit a good idea, but pears and papayas are simply great. [2]

This vitamin is found in a huge range of foods, but it is also used in a huge range of internal processes, so it makes sense that we pay so much attention to it! Vitamin C is a key player in the creation of new cells, in the stimulation of the immune system, and basically any “construction” project of the body (new bone, muscle, tissue, wound healing, etc.). Given that diverticulitis affects the colon in such a severe way, vitamin C is a very important nutrient boost to speed up the healing and reduce inflammation before the affected area worsens. [3] 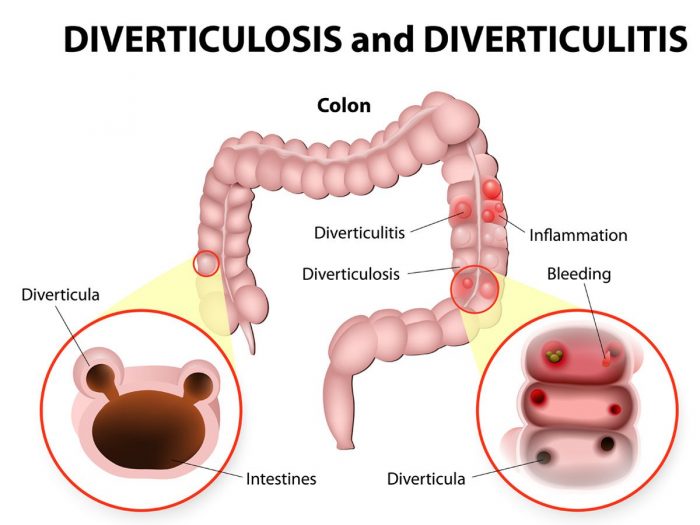 Diverticulitis is an inflammation or infection in one or more small pouches in the digestive tract. Photo Credit: Shutterstock

This type of grain is particularly important in a diverticulitis home regimen. Although other forms of fiber can be considered bad for diverticulitis, the anti-inflammatory nature of barley’s active ingredients makes this arguably the best grain you can consume when suffering from this condition. Even better, barley can be used in many different ways, in soups, stews, grain mixes, and cereals, so there is no excuse for lacking it in your diet. [4]

Although this seems like a very simple dietary shift, move from white rice to brown rice. Some of the nutrients and organic compounds in brown rice are able to reduce spasming in the colon, which can exacerbate conditions of diverticulitis, and they also soothe inflammation in the large intestine. This is a fibrous food, but again, sometimes the pros outweigh the cons, and there are different types of fiber that impact the body in unique ways. [5]

This group of simple snacking foods and vegetables includes some of the simplest remedies for diverticulitis. A study found that keeping these in your diet, despite them being slightly difficult to digest, will actually improve symptoms of diverticulitis. [6]

It seems that garlic is used as a home remedy for dozens of different conditions, and diverticulitis is yet another example. The active components in garlic cloves are extremely powerful, and can prevent infection of all types throughout the body. Diverticulitis is always at its worst when the inflamed region becomes infected, so ensuring that garlic has a major place in your diet will keep the symptoms under control and help you avoid taking antibiotics. [7]

This may be hard for people addicted to the fire of spicy food, but this is one of the worst things for your colon, as it will further inflame the irritated areas, resulting in an even longer recovery period before you feel normal again. If you are experiencing a flare-up of diverticulitis symptoms, lay off the hot wings and spicy curries for a few days and your body will thank you. [8]

Adding extra oregano to your dishes while handling a diverticulitis episode can provide significant relief. Many oregano oils are on the herbal market and can eliminate whatever bugs happen to be in your digestive system. Oregano has powerful antibacterial and antimicrobial properties, so whatever infection or bug was bothering your gut, oregano can clear it out and get you back to neutral. [9]

When you cleanse the large intestine with antibiotics or a strong wave of antibacterial food, you can often destroy the healthy gut flora that was already in place. Therefore, you leave yourself open and exposed to yet another flare-up or infection, because you don’t have that healthy bacteria protecting you. Make sure that you eat plenty of yogurt and other probiotic-containing foods in order to keep the protection in place for your gut. [10]

This widely known anti-inflammatory and soothing agent is perfect for soothing the inflamed areas of your large intestine, but it is more commonly sold in topical applications. However, there are certain oral options for Aloe vera that can give major relief to your colon during a diverticulitis episode. [11]

It was often believed that a high-fiber diet would improve the health of the gut once diverticulitis was developed, but there has since been studies showing that a high-fiber diet may actually be detrimental and result in an increased chance. The jury is still out on this controversial distinction, but the science of the matter is as follows. Fiber helps the digestive tract move food along to have the nutrients extracted and eventually have the remaining material excreted. The peristaltic motion of the colon is impacted by the fiber, so perhaps that unnatural stimulation is what eventually leads to the development of diverticulitis. Try avoiding high-fiber foods for a while and see how your body reacts. After all, every body is different. [12]

As mentioned earlier, one way to strip out any bacterial infections in the colon is through a cleanse, which can be conducted with castor oil. However, it is important to remember that castor oil is very powerful and will likely eliminate healthy gut flora as well. Also, only take prescribed or guided amounts, as castor oil can be quite dangerous if consumed inappropriately. [13]

A Final Word of Warning: Although most people consider diverticulitis an irritating part of their reality that occasionally flares up, remember that infections in the colon can become very serious, so if you are experiencing more frequent flare-ups, using these home remedies is great, but you should also go to see a medical professional for a status update.

Rate this article
Average rating 4.0 out of 5.0 based on 132 user(s).
Read This Next:
Popular Articles