Using egg substitutes in baking is quite common, particularly for people who want to reduce their fat intake.

Eggs are laid by a number of different species, many of which are used by humans as food, primarily the eggs of chickens, ducks, and certain fish. In most culinary applications, eggs from chickens are used because of their unique consistency, nutrient profile, and function as a thickening and binding agent. However, there are some people who must eliminate eggs from their diet, either as a result of an egg allergy or because they have chosen to go on a vegan diet. Fortunately, there are many egg substitutes available that can serve a very similar, yet integral purpose. [1]

The most common substitutes for eggs include silken tofu, yogurt, aquafaba, gelatin, mashed banana, arrowroot powder, nut butter, baking powder or soy lecithin, among many others. When making things like cookies, brownies, pancakes, waffles, meatloaf or bread, you may want to choose a different substitute that will work best. 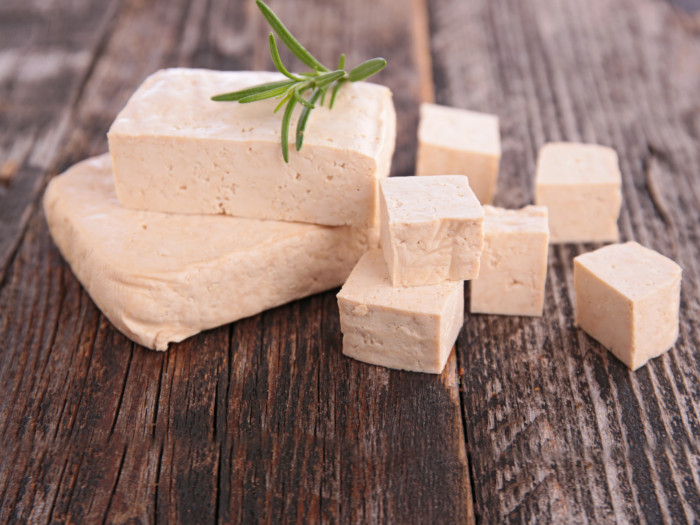 If you are cutting down on meat and trying to include plant-based protein in your diet, then tofu is a great alternative. Photo Credit: Shutterstock

Adding 1/4 cup of silken tofu to your recipe will be almost indistinguishable from using an egg, and it is a great vegan option that is rich in nutrients!

These seeds can be ground into powder and mixed with a small amount of water to form a gel-like paste. While this can occasionally give too much density to baked goods, it fulfills a similar purpose to eggs. [2]

For cakes, baked good, and brownies, a 1/4 cup of mashed banana can be a great choice as a substitute for 1 egg, although the final product may have a slight banana flavor.

This high starch powder can be mixed with a small amount of water to form a paste that can help to maintain the soft consistency of desserts. [3]

The consistency of applesauce, when included in a recipe, can work as one of the best egg substitutes. Try to find an unsweetened applesauce, however, or it will change the overall flavor of the recipe.

When you whip aquafaba, the water in which legumes are stored or cooked, you can create a liquid with an almost identical consistency to eggs that also works as a nutrient-dense thickening agent.

For baked goods, a 1/4 cup of either yogurt or buttermilk can provide the stability and texture that you want in cakes and brownies. [4]

If you mix 1 teaspoon of baking soda with 1 teaspoon of vinegar, you can create a great replacement for an egg in any recipe, but be sure to get the measurements right!

Agar-agar, being a gelatin agent, can be used in place of eggs in pancakes and other recipes.

As a key byproduct of soybean oil production, soy lecithin can mimic the function of eggs, namely its binding and thickening properties. [5]

3 tablespoons of almond butter or peanut butter can often replace an egg in a recipe, although they will likely change the final flavor of the dish.

The slightly thicker consistency of condensed milk can replicate the effect of an egg in most recipes. [6]

Despite the strong flavor of pumpkin, many people enjoy the more subtle flavor than the puree provides to recipes when used in small amounts.

The consistency of olive oil or almond oil can closely resemble the taste and effect of an egg white in many recipes.