The application of essential oils for bruises is an excellent way to speed the healing process, reduce pain and inflammation, and improve the appearance of these temporary injuries. Bruises are some of the most common injuries that can happen to the skin, and are caused when the blood vessels in a certain area are ruptured, allowing blood cells to pool beneath a certain area of skin. This could be caused by a significant force being applied, such as banging your shin into a table, falling down and scraping your knee, or excessive exercise, which can cause tiny tears in the blood vessels beneath the skin. As we age, it is said that our skin becomes “weaker”, which is partially true. It does become thinner, which provides less padding for the blood vessels, making bruising more common.

The symptoms of bruises occur in stages. Initially, you might see a red mark on an area where you bumped or banged a part of your skin. This is due to inflammation, but not necessarily blood. When the color of the impacted area changes to blue, purple or black, that is caused by the pooling of blood. This is also often accompanied by tenderness of the skin, pain, inflammation, swelling or itching. Within a few days to a few weeks, depending on your age and how efficiently your body heals, the bruise will fade to a yellow or green as the damage begins to heal. The pain tends to dissipate as the color of the bruise lessens. Fortunately, using essential oils for bruises can improve the healing process due to their stimulant, anti-inflammatory, analgesic and antioxidant properties. [1]

This essential oil is known to stimulate the production of healthy, new tissue and also increase circulation to the site of a bruise. Although this may result in additional inflammation at first, the healing process will occur much faster when using this powerful oil. [2]

How to Use – You can blend geranium oil with any number of other carrier oils, such as almond oil or coconut oil, and then apply that to the area of your skin that has been affected for rapid results. Don’t use this oil in an undiluted form, as it can cause irritation.

When you develop a bruise, it is usually the result of a forceful impact or painful event, so the application of lemongrass oil helps to eliminate that pain, thanks to its analgesic properties. It can also lower swelling around the area of the bruise, which allows for faster healing. [3]

How to Use – Blend 5-6 drops of lemongrass oil into 1 tablespoon of coconut oil and occasionally massage it into the area affected by the bruise. This can be repeated 2-3 times per day until the bruise disappears.

Rosemary oil is known to contain a number of powerful antioxidants and anti-inflammatory compounds, which can regulate the immune response to a bruise, help lower inflammation and decrease oxidative stress. This can help to open the way for faster recovery. [4]

How to Use – You can add a few drops of rosemary oil to a carrier oil and topically apply to the site of the bruise, or put some of this oil in warm bathwater and soak in the tub, fully submerging the bruised area. 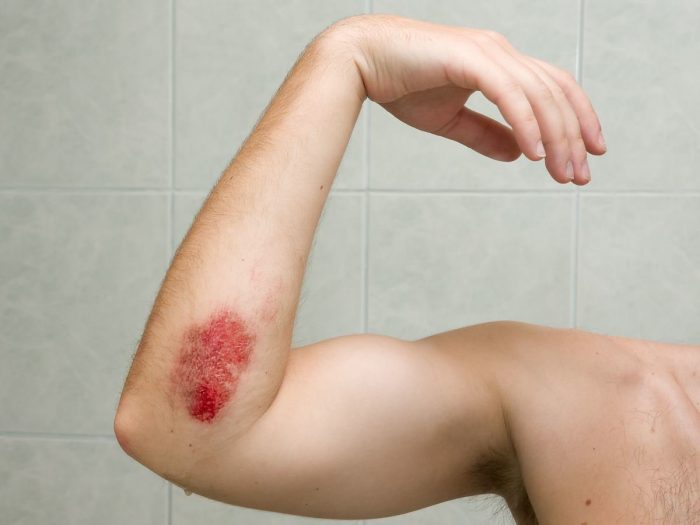 Pay attention to even minor bruises because sometimes they can be a symptom of something huge. Photo Credit: Shutterstock

This oil is famed for its ability to prevent bruises from forming, or at the very least minimize their appearance. There are certain astringent and anti-inflammatory properties in this oil that can prevent blood from welling up in the area of impact, meaning that if you apply the oil immediately, you may be able to avoid the bruise entirely! [5]

How to Use – Highly effective when used right after the injury, you can put undiluted lavender oil (3-5 drops) on the area where you think the bruise will form for pain relief and prevention of bad bruising.

This nutrient-dense oil has powerful analgesic and anti-inflammatory potential, so it is often used as a carrier oil for other more potent oils in the treatment of bruises. However, even by itself, arnica oil can suck the pain and heat of a bruise out, allowing the healing process to begin. [6]

How to Use – Mix equal parts of arnica oil, lavender oil and tea tree oil onto the site of the bruise and let those three powerful oils get to work on reducing pain and improving the appearance of the bruised skin.

After you initially bang your elbow or shin, the inflammation will cause blood to initially rush to the wound, which is when the bruise appears. However, 6-10 hours after that first wave of blood, you want to stimulate blood in vessels back to the area to start the healing process. The circulation-stimulating nature of helichrysum oil accomplishes this. [7]

How to Use – You only need a small amount of this oil for it to be effective, and simply apply 3-5 drops of the oil directly on the bruised area approximately 6-12 hours after the initial injury.

Similar to some of the other oils on this list, cypress oil is able to effectively block the pooling and collection of blood by stimulating circulation and rapidly starting the healing process. When applied quickly, this oil can mitigate the appearance of even a bad bruise. [8]

How to Use – Immediately after an injury that you assume will result in a bruise, apply 3-5 drops of this oil, often mixed with a carrier oil like almond or coconut oil. This should soothe pain and reduce the appearance of the future bruise.

Certain antioxidant and stimulant compounds found in frankincense oil have been linked to reducing the ugly appearance of bruises. This oil can be applied directly after an injury or during the recovery process when the bruise is badly discolored. [9]

How to Use – Unlike many other essential oils, you can use an undiluted form of this oil, but only a few drops are needed. Also, this oil has been deemed non-toxic and is even appropriate to use for children when they have fallen down and bruised themselves.

Famed for its anti-inflammatory properties, while this isn’t an essential oil, it is extremely effective in limiting the appearance of bruises and soothing the pain of the initial injury. The cooling nature of the aloe very can also lower swelling and provide numbness to the area of impact. [10]

How to Use – After an injury is sustained, apply 1 teaspoon of aloe vera gel to the site of the injury and massage gently until it is completely absorbed by the skin.

The soothing and pain-relieving properties of these essential oils for bruises can’t be denied, but they are highly potent and concentrated substances that can cause irritation and inflammation on the skin. Furthermore, if ingested, even in moderate amounts, they can cause stomach upset and other unwanted side effects. Before using highly concentrated essential oils on your body, it is important to speak with your doctor about any potential risks based on your specific health conditions. Also, if bruising doesn’t fade, or if you are beginning to see chronic, unexplained bruising on your body, this may be indicative of other more serious health conditions that you should have checked out by a medical professional.

Rate this article
Average rating 3.9 out of 5.0 based on 105 user(s).
Read This Next:
Popular Articles