While most people know that honey comes from bees, they don’t know that there is another nutritious type of food that comes from the same insect. Royal jelly is excreted from the top of a bee’s head and is collected in what’s called a queen cell (a special honeycomb). When bee larvae are first born, they are fed royal jelly directly from the workers in order to get a healthy, nutritious boost so they survive their first few days of life. However, after 3-4 days, larvae no longer consume royal jelly. For potential queen bees, this jelly is far more important. In fact, queen larvae are put into these special queen cells and are surrounded by royal jelly. This is what helps them to develop their “queen morphology”.

There is a single protein, royalactin, that causes the phenotypic change in the queen larvae. It causes them to develop ovaries and grow to a far larger size than normal bees. Furthermore, it has been known to extend the lifespan of a queen more than 20 times than that of a normal bee.

Also, since bees are such good workers, a single colony can store up to 500 grams of royal jelly over a 5-6 month period. A queen cannot possibly consume that much, which is why a market developed for this supplement. It is commonly found in diet or organic food stores. You can often find royal jelly at farmers’ markets as well. In terms of use, it usually comes in granules or powdered form and is commonly added to salads, smoothies, yogurt or cold beverages. It is important never to heat royal jelly because it will destroy all of the enzymatic properties and some of the proteins that make it beneficial for human consumption. Although it is not widely known, it is packed with health benefits for those who choose to add it to their diet. 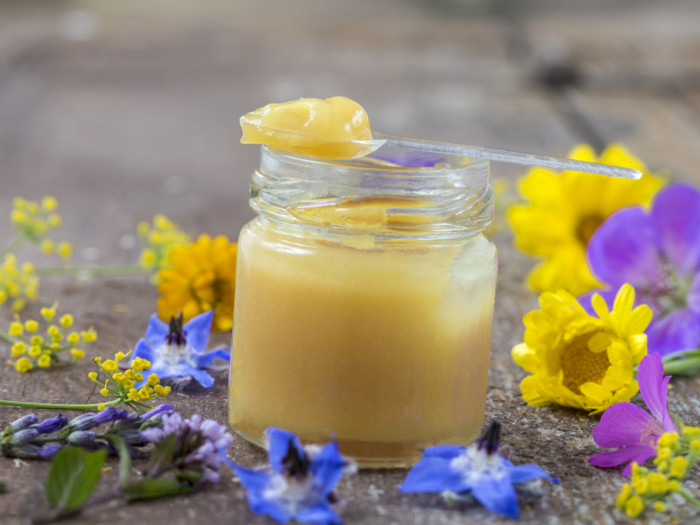 Royal jelly is a gelatinous substance produced by honey bees to feed the queen bees and their young. Photo Credit: Shutterstock

Royal jelly contains a rich variety of nutrients including minerals like calcium, copper, iron, phosphorous, silicon, sulfur, and potassium, as well as a wealth of B-family vitamins, biotin, inositol, folate, nucleic acids, gamma globulin, and 17 different amino acids, including the 8 essential amino acids that the human body cannot produce, and must, therefore, get from their diet.

The health benefits of this form of jelly are as follows;

Research has revealed that some of the proteins found in royal jelly have a direct effect on the blood pressure levels in humans. This protein hydrolysate can have a long-lasting impact on blood pressure. When this is combined with the potassium found in it, which also acts as a vasodilator to reduce stress on blood vessels and the heart, royal jelly begins to look like a great way to prevent heart conditions.

Although most people associate sweet, delicious food with unhealthy cholesterol, that isn’t the case with royal jelly. In fact, research has shown that consistently adding it to your diet can cause a notable drop in your “bad” cholesterol levels, thereby helping you prevent atherosclerosis and cardiovascular issues like heart attacks and strokes.

Although the exact function of royal jelly in the fertility process is unclear, some suspect that its impact on human fertility is connected to royalactin, the protein that affects the queen’s morphology and helps her become sexually viable. Whatever the reason happens to be, it has been shown to increase fertility and sperm motility in men, thereby increasing their partner’s chances of becoming pregnant.

According to a 2007 study by Japanese researchers, there are a number of antioxidants found in royal jelly, but specifically, it shows an ability to inhibit bisphenol A, also known as BPA. This is an environmental estrogen, which has been linked to increased levels of breast cancer. Therefore, by adding enough royal jelly to your diet, you can prevent this type of cancer.

Can Reduce the Effects of Chemotherapy

Chemotherapy agents no doubt help in reducing the risk of cancer but they also bring along a number of side effects like inflammation and heart failure. One example is the use of paclitaxel, which is used for lowering the threat of prostate, breast, lung, ovarian, bladder, melanoma, esophageal, and many other types of solid tumors. Research conducted in 2016 suggests that royal jelly is able to protect you from the negative side effects.

The impressive vitamins and active enzymes in royal jelly make it a potential anti-inflammatory agent. However, excessive heat will undo the enzymatic properties, so royal jelly cannot be ingested for those benefits. Therefore, you can topically apply it to affected areas of the body to relieve the pain of inflammation.

Just as royal jelly helps to extend the queen’s lifespan significantly, the antioxidants found in royal jelly can also work to eliminate the free radicals that normally cause premature aging. Antioxidants can eliminate wrinkles, maintain a healthy shine to your skin, prevent hair loss, and avoid macular degeneration, while also extending your life by preventing certain chronic diseases.

Lecithin is one of the components in royal jelly, which can effectively lower cholesterol, improve liver function, and promote healthy digestion. All of these things can help with weight loss. When combined with the improved metabolism that is caused by royal jelly and the protein content of this nutrient supplement, it can work as a definite weight loss booster!

The fact that royal jelly contains all 8 of the necessary amino acids that humans cannot produce themselves, makes it a very important food source. These 8 amino acids can be difficult to acquire but are necessary for forging new proteins in the body and keeping our metabolism running properly. Royal jelly can, therefore, increase cellular regeneration, boost muscle development and growth, increase bone strength, and optimize the hormonal/enzymatic processes in our body, resulting in other healthy boosts to our lifestyle!

Word of Caution: A number of people are allergic to honey, bee pollen, and royal jelly. The allergic reaction can also be quite severe, even causing rapid anaphylaxis. Before adding royal jelly to your diet, it is a good idea to speak with your doctor or allergist.