Tilapia is a delicious, lean white fish that has a wide variety of associated health benefits which may include its potential ability to help reduce weight, boost overall metabolism, speed up repair and growth throughout the body, build strong bones, reduce the risk of various chronic diseases, lower triglyceride levels, prevent arthritis, protect against cognitive decline, reduce signs of aging, boost the health of your hair, and strengthen your immune system. It is also known for its anti-cancer properties.

The name tilapia applies to a very broad range of fish, more than a hundred species, in fact, but they are actually a form of cichlid fish, one of the most diverse varieties of fish in the world. They have risen in importance in recent years, and now represent the fifth most popular and consumed fish in America. It is a mild, white fish that is easy to farm, affordable to buy, and doesn’t have the sometimes unattractive “fishy” taste that many people dislike about seafood. Experts predict that tilapia will continue to increase in importance and will likely become the most significant seafood product of the century in terms of human consumption. Since they are lean and short-lived fish, they have lower levels of toxins like mercury than other fish varieties, which is one of the strongest arguments in support of eating tilapia.

Knowledge of tilapia’s attractive taste and health benefits stretches all the way back to the ancient Egyptians, who actually had a hieroglyph representing this important fish. They are native to the Nile and North Africa, but they have been extensively farmed throughout Asia as well, and are now a “global” species. Some countries consider them to be invasive species, as they are very adaptive and can unbalance fragile ecosystems if they are accidentally introduced. There were more than 1.5 million tons of tilapia farmed and harvested in the US alone in 2005, and that number is expected to at least double by 2015. [1] 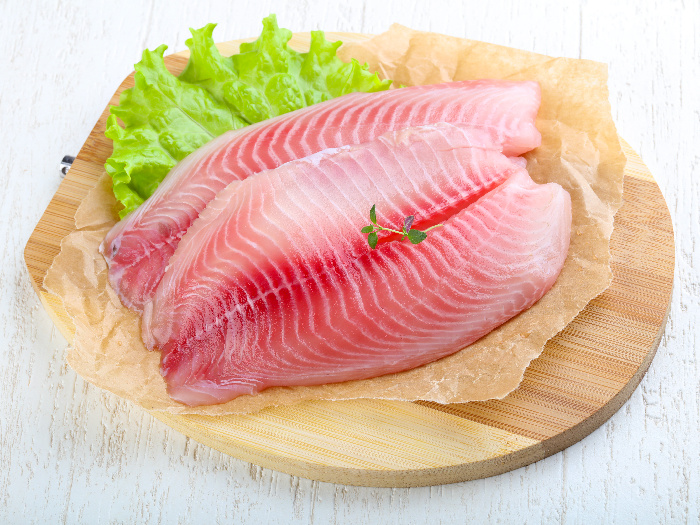 Tilapia is a popular edible fish that is low in fat and a good source of protein and omega-3 fatty acids. Photo Credit: Shutterstock

As a food, they are highly prized, but somewhat controversial, due to the fact that they are natural scavengers of detritus and toxic materials in the water they live in. Environmentally, this is beneficial, as they purify water and reduce oxygen waste, but as a culinary attribute, this is not always a good thing. Hence, you should only buy tilapia from established and reputable sources who farm these fish in clean, healthy environments. They can be eaten in a variety of dishes and soups, and since they are well-known throughout the world, they have become an essential culinary aspect of many cultural cuisines. Let’s look a bit closer at some of the nutritional components of tilapia that make it such an important element in our diet. [2]

Tilapia is highly valued as a seafood source due to its many beneficial qualities, which are attributed to its wealth of nutrients, vitamins, and minerals including significant amounts of protein and omega-3 fatty acids. According to the USDA National Nutrient Database, it also contains selenium, phosphorus, potassium, vitamin B12, niacin, vitamin B6, and pantothenic acid. Below you will find a more detailed explanation of the health benefits of tilapia. [3] [4]

The calories in tilapia fish vary depending on the preparation. Let’s take a look at the calorie count below. [7]

Tilapia has many health benefits, which include the following:

May Aid in Growth & Development

One of the most important aspects of tilapia is its impressive protein content, according to Elsevier’s Aquaculture journal. This makes up more than 15% of our daily requirement in a single serving. Protein is an essential part of our diet, particularly animal proteins because they can be enzymatically broken down into composite amino acids and reassembled into usable proteins in the human body. Protein is directly linked to the proper growth and development of organs, membranes, cells, and muscles. It is particularly important that children consume adequate amounts of protein to ensure that they develop properly. They also are necessary for muscle growth, cellular repair, and proper metabolic activity of numerous organ systems. [8]

Unlike many other animal products, fish like tilapia is high in protein but low in calories and fats. This can be a good way to reduce your caloric intake, while still giving your body all of the necessary nutrients it needs to function properly. Fish is often turned to as a dietary option for people trying to lose weight, without starving themselves with crash diets. [9]

One of the most prominent minerals found in tilapia is phosphorous, which is an essential mineral for human health, as it is a vital part of the development and growth of bone matter. It is also a necessary element in the maintenance of the teeth and nails, keeping them strong and durable well into your old age. Phosphorous can help prevent osteoporosis, which is the degradation of bone mineral density often suffered by people as they age, says Dr. Robert Heaney, Creighton University Medical Center, Omaha, US, in a study. [10]

Like many types of fish, tilapia has a possibly high content of selenium. The health benefits of selenium are impressive and are antioxidant in nature. A study published by Dr. Holly L. Nicastro, Cancer Prevention Fellowship Program, Nutritional Science Research Group, National Cancer Institute, in the Nutrients Journal, has directly linked selenium intake to a reduction in the risk of prostate cancer, as well as various heart conditions. Additional research is being done on the impact of tilapia’s selenium on other types of cancer. Antioxidants like selenium are famed for their potential ability to reduce free radical activity in the body, thereby possibly lowering the chances of oxidative stress on all the organ systems, and the mutation of healthy cells into cancerous ones. [11] [12] [13]

Both the potassium and omega-3 fatty acids found in tilapia have been connected to boosting brain power and increasing neurological function. Potassium increases oxygenation to the brain and is essential for proper fluid balance throughout the body, which facilitates nervous response and nutrient deposition to appropriate parts of the body, including the brain. [15]

Selenium is known as an antioxidant, and it can actually rejuvenate or stimulate vitamin E and C, both of which improve the quality and health of your skin. Therefore, more than 20% of the daily selenium that tilapia provides makes it a very good food source for improving the health and appearance of your skin by stopping the free radical damage. This means a reduction in wrinkles, sagging, age spots, and other signs of aging.

A final beneficial application of selenium is for the immune system. It can help boost the activity of white blood cells, which defend the body against toxins and foreign bodies. Furthermore, selenium plays a vital role in the regulation of the thyroid gland, which controls many of our hormonal functions, as per the Canadian Journal of Physiology and Pharmacology. Proper functioning of the thyroid gland guarantees a well-balanced metabolism and proper organ function and chemical reactions throughout the body. [16]

Word of Caution: As mentioned earlier, since tilapia have a natural penchant for clearing up toxins in their habitats, some of those toxins can be absorbed into their bodies. Therefore, it is important to purchase tilapia farmed from US fisheries or from areas of the world where strict regulation of fishery quality is followed. Also, since there are a significant amount of omega-6 fatty acids, people with pre-existing heart conditions should be careful about eating too much tilapia. Instead of tilapia, you can include alternatives like salmon, cod, trout, sardines, herring, or red snapper in your diet if you are looking for rich omega-3 content. Other than that, enjoy this delicious little whitefish!

Rate this article
Average rating 3.9 out of 5.0 based on 247 user(s).
Read This Next:
Popular Articles