Cloves are very popular in cooking, but for various reasons, people often seek out replacements or substitutes of cloves for their culinary and medicinal needs, including allspice, cinnamon, mace, nutmeg, and cardamom.

Using clove substitutes like nutmeg, cinnamon, cardamom, mace or ground allspice can help you achieve comparable flavors and relatively similar health benefits, although nothing is quite the same as ground cloves. Cloves provide a warm, aromatic smell that has a unique flavor in foods and beverages, so it is important to find herbs and spices with a similar quality and consistency. [1]

Cloves are commonly used in both sweet and savory dishes, although most would describe their flavor as sweet. Cloves are even used to flavor wine and cider, as well as for adding an extra kick to marinades and sauces. In terms of health benefits, cloves have antioxidant, anti-inflammatory, carminative, digestive and anti-flatulent properties.

There are plenty of reasons why someone may need to substitute cloves in their recipe or natural health treatment, including simply forgetting to re-fill your spice rack or suffering from a mild allergy to this popular spice. Regardless of your reason for substituting out your cloves, it is important to understand your options, both in terms of how they taste and how they can potentially benefit your health. [2] 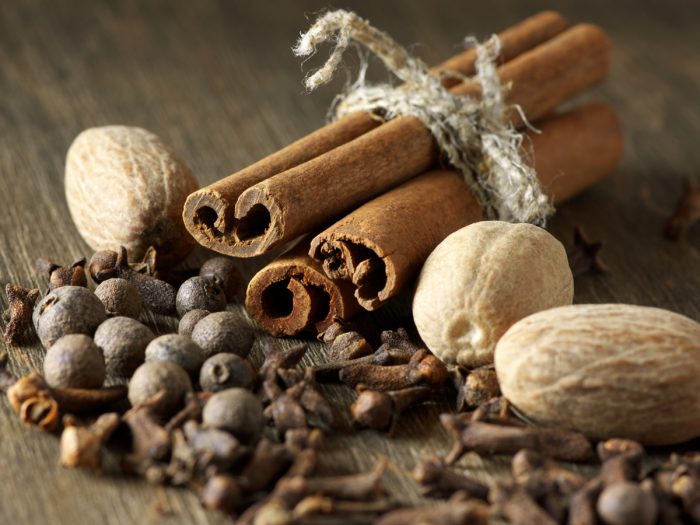 Nutmeg has a similarly warm flavor and can work in sweet or savory dishes. If you are substituting for ground cloves, you should simply use the same amount of nutmeg as the recipe originally called for. While many people like to cut the amount of a substitute in half the first time, to ensure that it doesn’t overpower the flavor of the dish, nutmeg is considered slightly less potent than cloves, and shouldn’t be a problem in your meal. Nutmeg is also good at detoxifying the body and improving digestion, as well as protecting the immune system. [3]

Mace is derived from the red coating that encases the nutmeg kernel. Once this outer coating is dried and ground, it creates a delicious spice that is particularly popular in savory dishes like stews, meat dishes, and curries. However, mace should be added to food near the end of preparation, as it can become bitter if cooked too long. Due to its joint relationship with nutmeg, it shares much of the same sweet-savory dynamic and is an excellent substitute for cloves. It can also be used in the same quantity as clove in the recipe. Mace is highly praised for its ability to settle the stomach, reduce gas, and ease symptoms of both diarrhea and constipation. Slightly lesser mace should be used as a substitute for cloves than in the case of nutmeg, allspice or cinnamon. [4]

As the name implies, allspice has characteristics of many different spices, namely cinnamon, nutmeg, and clove. However, despite what many people believe, it is not a combination of these spices, but rather the dried pimenta fruit from the Pimenta dioica plant, which is native to the Caribbean and parts of Central America. The berries of this plant are dried in the sun and then ground up, releasing that characteristic smell, somewhere between cinnamon, nutmeg, and clove. This is why allspice functions as such a perfect substitute for cloves and works well in gravies, sauces, meat dishes, stews, curries and even in the preparation of pickles! In sweet desserts, the slightly peppery taste of allspice may not be ideal. Allspice is used by traditional health practitioners to reduce bloating, cramping, diarrhea, nausea, vomiting and excess flatulence. You can use the same amount of allspice as what the recipe recommends for cloves. [5]

The most common replacement for cloves is often cinnamon, both for its powerful (and popular) flavor and its well-known health benefits. Cinnamon has less sweetness and more spice than cloves, so it isn’t a perfect replacement, but it certainly works in most dishes. Some people choose to combine vanilla with their cinnamon to achieve that perfect clove substitute flavor. Cinnamon also has unique volatile compounds that help the body in many different ways, including reducing inflammation in the gut, boosting cognition, regulating diabetic symptoms, and protecting heart health.

If your spice rack gets down to dangerously low levels, one of the last options for a clove substitute is the use of cardamom. The spicy, citrus and herbal flavor of cardamom isn’t as sweet as cloves and is far from a perfect match in dishes calling for that spice. However, when mixed with cinnamon, a similar flavor can be achieved, particularly in savory dishes. You should use less cardamom than what the recipe calls for in the form of cloves, due to the spicier nature of this particular substitute. Cardamom is well respected in health circles for its ability to ease the symptoms of IBS, strengthen the immune system, soothe the respiratory tract, and eliminate heartburn. [6]

Rate this article
Average rating 3.7 out of 5.0 based on 65 user(s).
Read This Next:
Popular Articles