Coconut oil, amongst other edible oils like sesame oil, is a popular option for oil pulling. For oil pulling therapy, simply swish 1 tablespoon of coconut oil around in your mouth for approximately 15-20 minutes. You can do this slowly, and it isn’t a constant swishing like you would do during a 30-second mouthwash. You should do your oil pulling first thing in the morning before you eat any food or even brush your teeth. You should not swallow any of the oil, as it contains a lot of bacterias which are harmful to your general health. Oil pulling is best practiced in sitting position with your chin up. It can be practiced thrice daily in empty stomach before meals to fasten the healing effects.

Once you are finished, spit the used coconut oil into the trash can – not down your sink, as per a recent review article, The American Environmental Agency (EPA) estimated that oils contributed to a whopping 47% of sewer blockages! The thick oil will eventually clog your pipes, particularly if you do oil pulls. After you spit, you can rinse your mouth out with warm water – or even salt water for a final level of clean up. Then, brush your teeth and go about your day! [1] 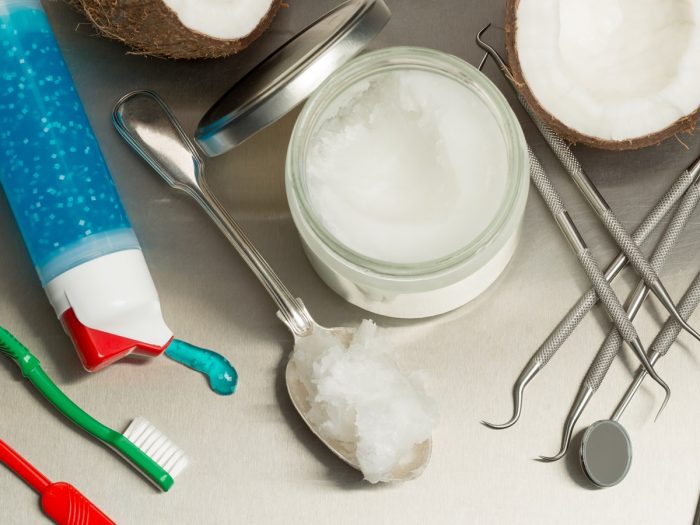 When first starting the practice of coconut oil pulling, begin by swishing the oil [2] around for only a few minutes, so you can get used to the taste and sensation. If you enjoy the process and notice positive results, gradually begin extending your oil-pulling sessions until reaching the suggested 15-20 minutes.

Coconut oil pulling works wonders on the teeth, particularly in terms of removing bacteria responsible for dental decay and cavities, preventing cavities, improving gum health, eliminating bad breath, whitening the teeth, and boosting the immune system. Oil pulling has been used for thousands of years in various traditional medicinal practices, including Ayurvedic treatments in India. Unlike many other traditional remedies, which are surrounded by controversies and rarely backed by research, there are many different studies that have pointed to the notable benefits of oil pulling for oral health. [3]

While oil pulling has been done with many different substances over the centuries, recent studies have found that coconut oil and sesame oil are the best options to deliver effective results. Coconut oil contains a wealth of antibacterial and anti-fungal properties that help keep the body protected in many other ways, and oral health is no exception. Lauric acid, one of the medium-chain fatty acids found in this oil, is able to significantly reduce the presence of many different types of bacteria from the oral cavity including those that cause bad breath and acidic conditions within the mouth. Coconut oil is also easily absorbed by tissue membranes, meaning that the antioxidant and immune-boosting effects of the oil can be enjoyed even by swishing it around in your mouth. Virgin organic coconut oil is the best choice for oil pulling, as it is completely unprocessed and will have all of the important components, especially those that bind to the biofilm of the teeth to eliminate bacteria. [4]

Coconut oil pulling has many benefits for your oral health, including its ability to kill bacteria, strengthen the enamel, reduce gum inflammation, freshen the breath, boost immune health and promote healing.

Oil pulling can have anti-inflammatory effects on the gums and tissues in the mouth, which may have become irritated due to acidic conditions. In a study carried out by Singla et al in Kasturba Hospital, Manipal, a significant reduction in the count of Streptococcus mutans and Lactobacillus spp. in saliva was observed when the subjects massaged their gums for three weeks using coconut oil. S.mutans and Lactobacillus spp. are the causative agents of dental plaque and cavities, hence gum massage therapy using coconut oil improved gum health significantly. [6]

Many people recommend massaging the gums [7] directly with coconut oil for 5-10 minutes, in addition to oil pulling. It can help to stimulate blood flow to the gums and speed up the healing process, and also stop gum recession – a very common oral health issue.

The main culprit behind tooth decay is a bacteria called Streptococcus mutans [8], which feeds on the sugar in our diet and then pumps out acidity into the oral environment. This breaks down the enamel of the teeth, leading to cavities and weakened teeth. Coconut oil’s lauric acid is known to specifically eliminate S. mutans and improve oral health.

A recent study carried out by Kaushik et al. published in the Journal of Contemporary Dental Practise stated that there was a significant reduction in the bacterial count of S.mutans in subjects who practiced coconut oil pulling for 10 minutes every day for two weeks as compared to subjects who used only distilled water. [9]

Another study, conducted by Peedikayli FC et al. in 2016 demonstrated comparable results in the reduction of S.mutans between chlorhexidine mouthwash and coconut oil. This reinforces the use of coconut oil as it is natural, safe and has no side effects compared to other commercially available mouthwashes. [10]

There are many other infections that can attack the gums, teeth, tongue, and tissue of the mouth, but the comprehensive effects of lauric acid, capric acid, and caprylic acid are able to eliminate almost any type of pathogen or illness that could take up residence in your mouth. Oil pulling at least once a week can significantly reduce your chances of bacteria being harbored in your teeth.

Bad breath has more to do with bacteria living in your mouth than it does with the garlic you have in your pasta. If you can eliminate those anaerobic bacteria – along with up to 700 other bacterial species in the mouth – then you can safely speak to anyone before checking your breath first! [12] [13]

The damage that is done to your gums, teeth, and tissues is difficult to repair, but the antioxidant components of coconut oil are a good option to try. As per the USDA [14], coconut oil contains vitamin E that plays a key role in stimulating the growth of new cells, while also protecting against the further breakdown of enamel and oral tissue.

While the benefits of this natural health remedy are clear, there are some people who are allergic to coconut. Swishing a concentrated dose of coconut oil in your mouth for 20 minutes can have some very negative side effects. That’s why ensure, that you aren’t allergic before using this method. If you cannot use coconut oil, sesame oil has very similar properties  [15]and effects, and may not trigger your allergies.

Also, some people assume that oil pulling is an acceptable replacement for regular brushing of the teeth, but that is far from true. You should still brush at least twice per day, and see a dentist at least once every six months. An improvement in oral hygiene will be noticed within two weeks of practicing the correct method of oil pulling.

Rate this article
Average rating 3.8 out of 5.0 based on 33 user(s).
Read This Next:
Popular Articles