Sencha tea is known for its health benefits, including its ability to fight chronic diseases, aid in weight loss, protect the immune system, increase energy, and stimulate cognitive activity. This popular form of green tea makes up approximately 80 percent of the tea produced in Japan, a major tea-drinking nation.

What is Sencha Tea?

Sencha tea is a Japanese ryokucha (green tea), which is brewed with whole leaves of the Camellia sinensis plant, giving the tea several impressive health benefits and a delicious, soothing flavor. The tea is yellow and is produced from the top buds and leaves of tea plants. It has a light aroma and bitter-sweet taste. Green tea refers to a type of tea that is not treated or processed in any way. Therefore, sencha, being a green tea, better retains its nutrients and active ingredients. [1]

There are many types of sencha teas, the most popular ones are listed below.

The health benefits derived from all teas, including sencha tea, are in large part due to antioxidants, catechins, vitamin C, beta-carotene, folic acid, saponins, potassium, calcium, and phosphorus found in these nutrient-dense leaves. It also contains caffeine, which is a major contributor to many of the health benefits. [2]

Like most types of green tea, sencha tea is rich in antioxidants, which seek out free radicals and help prevent oxidative stress in the body. An epidemiological study by Kazue Imai, et al. suggests that green tea potentially has anticancer properties in humans. Also, the presence of polyphenols such as epigallocatechin gallate (EGCG) helps induce cell death or apoptosis in cancerous cells. [3] [4]

This research also suggests that the intake of green tea may lower the risk of prostate cancer. However, other studies indicate no clear evidence of the anticancer properties of green tea. [5]

More studies and clinical trials are required to confirm the anticancer activity of sencha tea or green tea against different types of cancer. [6]

Caffeinated beverages, of which tea is one, are thought to be very good for stimulating the metabolism, which may improve passive fat-burning in the body. Sencha tea does not have as much caffeine as a cup of coffee, but it does have more caffeine than the majority of tea varieties out there. It can be also an important beverage to incorporate in many weight-loss diets. [7] [8] 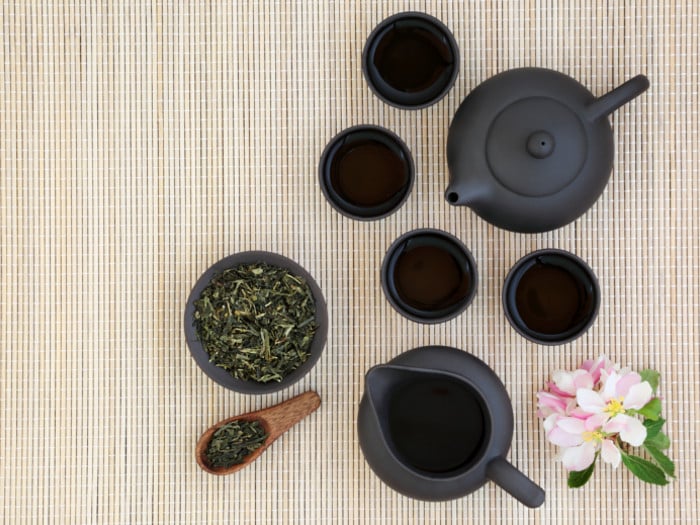 The rich blend of vitamins, minerals, caffeine, and antioxidants found in this green tea variety make it very effective as an energy-booster. If you want to increase productivity with a clear mind and a lower risk of a caffeine crash, sencha tea is an excellent choice. [9]

Studies have shown that, despite having a significant amount of caffeine, green tea can lower blood pressure and prevent excess strain on the heart. This can be beneficial for those at high risk of hypertension and other cardiovascular diseases. [10]

Sencha tea has long been considered a brain stimulant, and the antioxidants found in this tea can stimulate neural pathways and prevent oxidative stress in the brain, which results in the deposition of plaque. This tea may help keep your mind sharp and focused, even as you age, and lowers your risk of developing cognitive disorders. [11]

In addition to lowering the blood pressure, sencha tea is thought to reduce LDL or bad cholesterol levels, as shown in some animal models. It is thought that the catechins in this tea affect lipid metabolism by decreasing the absorption of fat, and thus, of triglycerides and cholesterol. This, in turn, may boost metabolism, aid in weight loss, and protect from several cardiovascular complications. [12]

High levels of vitamin C and a host of antioxidants make this tea a perfect immune system supporter. Tea is thought to stimulate the production of white blood cells, which fight off infections, while also speeding healing if you are suffering from a common cold or flu. [13]

The antioxidants and vitamin C in sencha tea are essential to keep the skin looking radiant, acne-free, and youthful. They also aid in reducing the appearance of wrinkles and delaying aging by hydrating the skin. [14]

The fluorine content in sencha helps to strengthen teeth and prevent cavities. Sencha tea may also assist in keeping bad breath away and protecting your mouth from various germs.

Sencha tea extracts have a key role in aromatherapy as they relieve stress and lighten up the mood. They are often used in incense, lotions, and soaps for the same reason.

How to Make Sencha Tea?

You can easily make sencha tea at home, although you will need to source the tea leaves first! This tea is rarely found outside of Japan, but it is possible to find the tea leaves in certain specialty import stores. 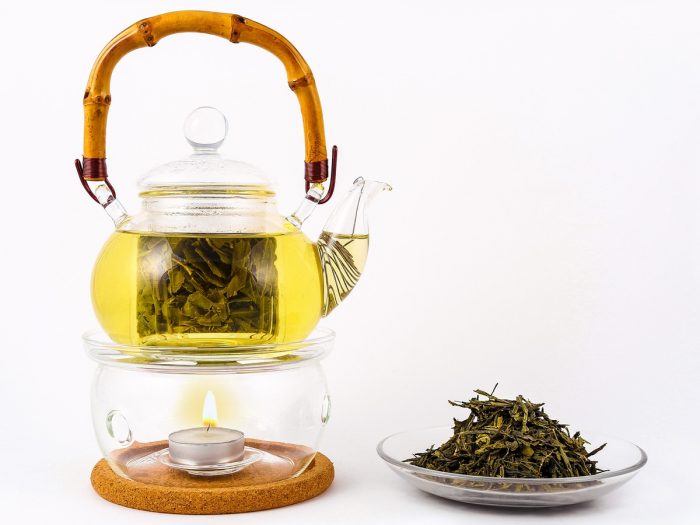 There are some possible side effects to drinking sencha tea which include: [17]

These side effects are primarily the result of the caffeine found in this variety of green tea, and typically only occur if you drink an excessive amount. There is less caffeine in green tea than coffee, but it can still affect the body. [18]

Rate this article
Average rating 3.9 out of 5.0 based on 293 user(s).
Read This Next:
Popular Articles