The health benefits of wasabi include providing a reduced risk of cancer and heart disease, as well as possibly anti-inflammatory properties for joints and muscles. It may also help to defend against bacterial infections in the body and mouth, and can even reduce the irritating effects of seasonal allergies. This potent plant can be used to address respiratory problems. Wasabi’s potential wealth of antioxidants may help to boost the immune system and remove harmful toxins from the body. [1]

Wasabi is a plant closely related to cabbages and horseradish and is a member of the Brassicaceae family in taxonomic classification. It is commonly known as Japanese horseradish, although it is a different plant from horseradish. However, wasabi does have the strong flavor or “kick” of horseradish, which is also the reason why the two are often used as alternatives.

Wasabi has a strong, spicy taste, different from the taste of capsaicin, the chemical found in chili peppers that gives them their hot or spicy flavor. While capsaicin gives the sensation of “burning” on the tongue, wasabi affects the olfactory sense, releasing chemical vapors that affect the nasal passage. The potent taste of wasabi is similar to hot mustard and is most commonly used as a condiment in sashimi (raw seafood) and sushi. It is also used in many other Japanese dishes.

Since its unique flavor is not oil-based as it is with chili peppers, the strong or uncomfortable sensation of eating wasabi does not last very long, and some people actually find it pleasant and invigorating!

The powerful smell is derived from a specific part of the plant’s chemical makeup, the high levels of allyl isothiocyanate, while the taste comes from closely related isothiocyanate compounds. These chemicals work as a defense mechanism against predators who try to consume the plant, but it hasn’t worked too well on humans! These isothiocyanate chemicals also have a strong impact on the health benefits of wasabi, which will be discussed in the next section.

The entire plant is used to serve various purposes. Chefs can purchase it as a root or paste, or as a powder, which is slightly easier to use. 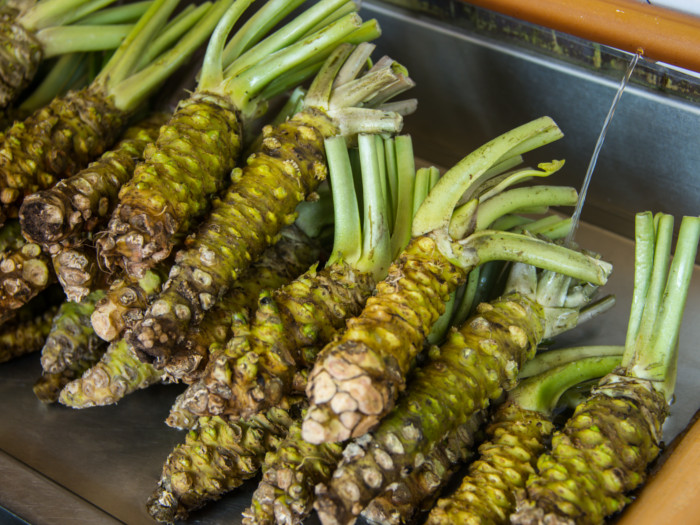 Although it may be overlooked as just any other condiment, wasabi in its various forms can be a powerful addition to your diet. A 100 gram serving of wasabi contains around 109 calories and only 1 gram of saturated fat. It is also a rich source of fiber, protein, and energy. In terms of minerals, it contains calcium, iron, magnesium, phosphorus, potassium, sodium and zinc, which are all natural and necessary elements in our balanced diet. It is rich in vitamin C, thiamin, riboflavin, niacin, folate, vitamin A and vitamin B6. The plant also has high levels of certain antioxidants, like isothiocyanates, and it has zero cholesterol! [3]

Overall, if wasabi is integrated into a diet with some frequency, it can boost your necessary nutrient intake, and positively affect your overall health in a surprising number of ways!

Health benefits of wasabi include the following:

May Have An Anticancer Potential

Regular addition of wasabi to the diet can prevent certain types of cancer. The most notable and beneficial nutrients found are the isothiocyanates. These form from glucosinolates after the plant is harvested or cut. The various isothiocyanate antioxidants are very beneficial in eliminating free radicals throughout the body’s systems. Studies have shown that one form of isothiocyanate in wasabi, 6-MITC, has been clearly shown to inhibit the expansion of leukemia and stomach cancer cells. It actually promotes apoptosis (cell death) within 24 hours of consumption. The use of wasabi may prevent the growth of tumors, even at a pre-clinical or pre-treatment size. The most attractive thing about this type of treatment is that isothiocyanates appear to kill cancer cells without damaging the healthy, surrounding cells. [4] [5] [6]

Similar studies have found 6-MITC to be equally effective against breast cancer and melanoma cells, leading many researchers to support wasabi as a small preventative method against multiple types of cancer. Research regarding its strength against other kinds of cancer is still ongoing, but this powerfully flavored plant has already proven itself in the oncological community. [7]

Only genuine wasabi has diverse isothiocyanates that can fight a wide range of cancerous conditions. Even other plants in the Brassica family pale in comparison, particularly because they are traditionally cooked before eating, which can reduce the nutritional content, and can degrade the enzymes that lead to isothiocyanate formation. If you want to help prevent cancer through dietary change, only use real wasabi!

Another popular reason for adding wasabi more regularly to your diet is to prevent cardiovascular issues. It has potential anti-hypercholesterolemic properties which help in lowering high cholesterol levels in the human body and reduce the risk of strokes and heart attacks. The isothiocyanates in wasabi do more than preventing cancer. They also have inhibitory effects on platelet aggregation. Platelet aggregation is basically the grouping together or clumping of blood platelets into a thrombus, or blood clot. These clots are the main causes of strokes and other cardiovascular crises. By breaking down and inhibiting the formation of these clots throughout the body, it effectively reduces the risk of heart disease and stroke! [8]

The pungent plant, wasabi, has also been shown to reduce cases of joint swelling, inflammation, and can even subdue the effects of arthritis. Again, the powerful antioxidant isothiocyanate compounds have been shown to reduce the inflammation of joints, ligaments, and muscles that may contribute to arthritis and joint pain. Studies suggest that wasabi helps in maintaining bone integrity in humans and can help in reducing the risk of osteoporosis. In the same way that isothiocyanates can reduce platelet aggregation to protect from heart disease, they also can reduce the aggregation at weak points on the body that cause pain or discomfort. Add some wasabi to your diet and feel younger! [9] [10]

The powerful, natural components of wasabi have also been shown to fight off bacterial infections! In a recent study of the antibacterial properties of various foods and vegetables, wasabi ranked as the most successful antibacterial food against E. coli and Staphylococcus aureus (Staph infections). This means that food poisoning and other unfortunate conditions can be prevented by maintaining levels of isothiocyanates in the diet through the consumption of wasabi. Again, the isothiocyanates were proven to be the vital component that neutralized these potentially deadly bacteria within the body. Some companies have begun to include trace elements of wasabi extract in their antibacterial creams and gels to boost their strength and effectiveness! [11] [12]

Wasabi can be a strong line of defense against certain respiratory tract pathogens. The gaseous component of wasabi, which causes such a powerful reaction in the nasal passages and sinuses, is actually the gaseous release of allyl isothiocyanate, which can actively inhibit the proliferation of respiratory tract pathogens like those that cause influenza and pneumonia. The smell and the sensation in your nose after eating it may be strong, but it can do a lot of good for your health and well-being. [13]

Wasabi can prevent gut inflammation and prevent the risk of diverticulitis or leaky gut syndrome. This benefit is attributed to its high-fiber nature which helps bulk up the stool, thereby improving the digestion process and improving overall gut health.

Wasabi is usually found in Japanese cuisine, and it is a traditional staple of that country. It is also primarily grown there because it is very difficult to cultivate. Even in Japan, there are only a few areas of the country where large-scale cultivation of wasabi takes place, mainly in mountainous river valleys or stream beds. In North America, it has only been successfully grown in two places, North Carolina and the province of British Columbia.

Normal consumers can typically buy tubes of wasabi that are ready to use in their cooking. If you are a culinary purist, be sure to buy the real thing when shopping for wasabi. It is popular, but it is not cheap and is not a widely exported product from Japan. Therefore, many companies create imitation wasabi from mustard, horseradish, and other components. The effect on your nose might be similar, but it is not a true wasabi experience, and it doesn’t give you all the same health benefits as true wasabi. High-end or traditional Japanese restaurants will typically have the genuine article, as well as specialty or import food stores.

Wasabi can have a few side effects including the following:

Remember! Moderation in all things is important to maintaining a healthy body and mind.

Rate this article
Average rating 4.0 out of 5.0 based on 217 user(s).
Read This Next:
Popular Articles