The health benefits of purslane may include its ability to possibly aid in weight loss, improve heart health, and ensure the healthy growth and development of children. It may also protect the skin, build strong bones, and increase circulation.

Purslane (Portulaca oleracea) is a leafy vegetable that most likely originated in the Mediterranean region. It is widely eaten throughout Europe, Asia, the Middle East, and Africa. It is an annual succulent with a slightly sour and salty taste, making it an interesting addition to the plate and palate. The entire plant, including the leaves, stems, flowers, and seeds are edible and have been used for thousands of years in different variations. [1]

As mentioned, purslane has been in use since prehistoric times and is widely referred to in ancient Chinese medicine, as well as in early aboriginal culture. However, in the United States, it is usually ignored and treated like any other invasive weed in gardens and yards. Let’s shed some light on its nutrition and benefits profile below. [2]

When this unusual ‘weed’ became the subject of scientific study, researchers were shocked at what they found! Purslane plants may have high levels of omega-3 fatty acids and antioxidants. As per the USDA, purslane can also be a rich source of water and energy. It may contain good quantities of calcium, iron, magnesium, phosphorus, potassium, and sodium. It could be packed with certain vitamins like vitamin C, thiamin, riboflavin, niacin, vitamin B-6, folate, and vitamin A. [4] [5] [6]

Purslane has many benefits that may help in preventing and curing diseases. Let’s discuss the benefits in detail below:

Research has found that the high levels of omega-3 fatty acids, could be found in purslane, and it may help to reduce the amount of LDL (bad) or bad cholesterol in the body. This may help to promote a healthier cholesterol balance in our bloodstream. [7] 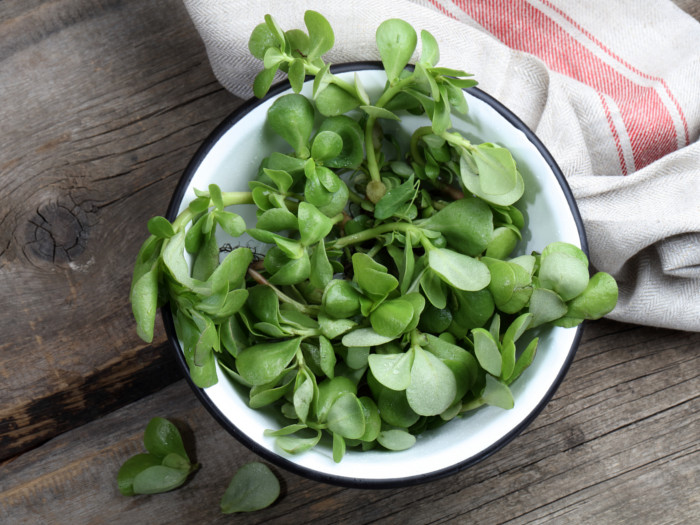 Purslane is s great to use in salads, soups, and stews. Photo Credit: Shutterstock

Consuming foods that are high in omega-3s may have been shown to significantly reduce the risk of cardiovascular diseases, as well as atherosclerosis, thereby possibly reducing the risk of heart attacks and strokes. Furthermore, the potassium found in this vegetable can aid in reducing blood pressure due to its behavior as a vasodilator, relaxing blood vessels and possibly reducing strain on the heart. [8]

The high content of iron and copper in purslane means that it may help stimulate the production of red blood cells. Both of these minerals are essential for boosting circulation by delivering more oxygen to essential parts of the body. They may also increase the healing speed of cells and organs and might aid in improving hair growth and metabolic efficiency! [9] [10] [11]

As per research, purslane may contain 20 calories per 100 grams serving of it. Being low in calories, while being nutrient-rich and packed with dietary fiber, purslane makes for a good addition to a weight loss diet. According to an animal study published in the Malaysian Journal of Nutrition, purslane extract was shown to have possible anti-obesity and anti-diabetic effects on its test subjects. [12] [13]

Purslane may contain plenty of good fatty acids (omega-3s). Although research is still ongoing, early studies have shown that high levels of omega-3 fatty acids in the diet of young children may seem to decrease some of the signs and symptoms in certain developmental disorders, possibly including autism and ADHD. [14]

Purslane may help treat a wide variety of skin conditions as well. A study published in 2004 revealed that purslane leaves may contain high levels of vitamin A. This vitamin, combined with the cocktail of compounds found in this ‘weed’ means that it could help reduce inflammation when applied topically. When consumed it may aid in improving skin, reduce wrinkles, and stimulate the healing of skin cells to remove scars and blemishes. [15]

As per another study published in the journal of Pharmacopuncture, the topical application of purslane leaves might also help with skin allergies.

The minerals present in purslane may make it a healthy choice for people who want to mitigate bone loss. Calcium, magnesium, iron, and manganese are all elements that may be required to develop bone tissue and speed the healing process of the bones. Purslane may also have anti-inflammatory potential that may aid in the prevention of osteoporosis, a common age-related condition that affects millions of people. [16]

Word of Caution: The only potential downside that researchers have found about purslane may have relatively high content of oxalic acid, which leads to the formation of kidney stones. If you already suffer from kidney stones, speak to a medical professional about consuming it. It should be noted that boiling it in water causes a great deal of oxalic acid to be eliminated, without losing many of the other beneficial nutrients. [18]

Rate this article
Average rating 4.0 out of 5.0 based on 706 user(s).
Read This Next:
Popular Articles