The most powerful health benefits of beets include their ability to lower blood pressure, improve digestion, and boost athletic performance. They also help in providing relief from macular degeneration, improve blood circulation, aid in skincare, prevent cataract, build immunity, and relieve respiratory problems. These benefits of beetroots can be attributed to their richness in nutrients, vitamins, and minerals.

Beets or beetroots, as they are often called, belong to the Chenopodiaceae family. Beetroots are one of the varieties of the Beta vulgaris species. They are frequently added as an ingredient to salads, soups, and pickles and are also used as a natural coloring agent. Even though they are available throughout the year and can be eaten every day, they are still considered seasonal vegetables. Beet lovers think of the taste as earthy; however, several people avoid these root vegetables as they think beets taste like dirt. Beets are a valuable source of sucrose, which makes them a viable replacement for tropical sugar cane. They are frequently used to make refined sugar. The history of beets stretches back to ancient times, and the earliest signs of their cultivation were approximately 4,000 years ago in the Mediterranean region. They have long been associated with sexuality, and have been known and used as an aphrodisiac for thousands of years. [1] 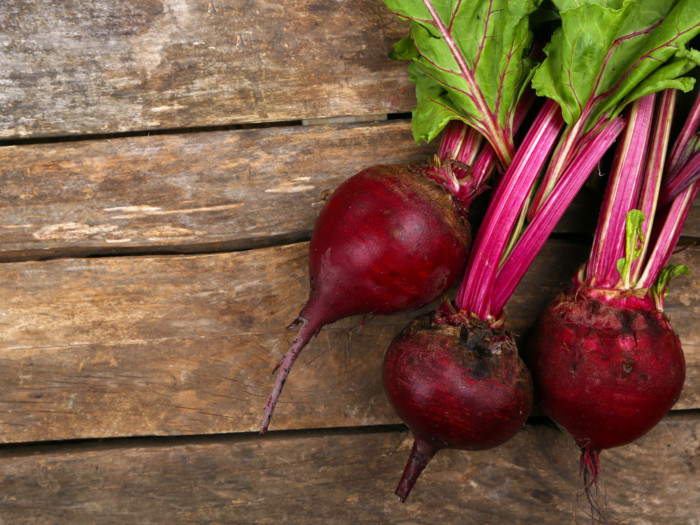 Beets are low in calories, with one cup (136g) of raw beetroot containing just 58 calories. However, beets have the highest sugar content of all vegetables and are relatively high in carbohydrates.

According to USDA National Nutrient Database [3], beets are highly nutritious root vegetables that are a great source of vitamins and minerals, such as potassium, sodium, iron, folate, phosphorus, magnesium, calcium, vitamin C, and B vitamins such as thiamin, niacin, and riboflavin. Rich in antioxidants, beets get their deep color from the betalain pigment, which has potent anti-inflammatory properties. They are also abundant in phytochemical compounds such as anthocyanins, carotenoids, lutein/zeaxanthin, glycine, and betaine. They are a great source of dietary fiber and are low in fat, cholesterol, and calories.

The most popular health benefits of beets include the following:

Beets are abundant in dietary nitrates, which get converted into nitric oxide in the body. Nitric oxide helps to relax and dilate the blood vessels, thereby lowering blood pressure and preventing hypertension. Dr. Shannon Amoils, senior research advisor at the British Heart Foundation, in his study said, “A daily glass of beetroot juice can lower blood pressure in people with hypertension – even those whose high blood pressure was not controlled by drug treatment.” [4]

A research paper published in the Journal of Applied Physiology shows that consumption of nitrate-rich, whole beets improves running performance in healthy adults. In another study, researchers found that people who drank beet juice increased their oxygen uptake by up to 16 percent. This is more than what a normal person can improve by training extensively! Beet juice has shown to improve athletic performance in runners, swimmers, and cyclists, making it an interesting sports drink that most people would never consider. [5]

Beets contain a significant amount of carbohydrates that provide energy for prolonged sports activities. Carbohydrates are the natural building blocks of energy metabolism, and beets provide them without any of the negative side effects of many other carbohydrate-heavy foods. Optimal levels of carbs ensure the peak functioning of all important metabolic reactions that keep the organs functioning efficiently. [6]

In the Middle Ages, beetroots were used as a remedy for digestive disorders including constipation. The fiber and the antioxidants present in beets help to flush out the body from toxic substances, keeping digestive health at an optimal level. [7]

Beets improve brain neuroplasticity due to the nitrates present in them. These nitrates help increase oxygenation of the somatomotor cortex, a brain area that is often affected in the early stages of dementia. As people get older, blood flow to the brain decreases, which often leads to decreased cognition. Eating beets can slow or prevent this process. The study published in the Journals of Gerontology confirms that beetroot juice in combination with exercise in older adults can have a more positive impact. [8]

Packed with nutrients and fiber, beets are an excellent addition to a weight-loss diet. Magnesium and potassium in beets help to detoxify the body and flush out excess water, preventing bloating. These nutrients help to optimize metabolism and losing excess weight. Beet juice is often prescribed in detoxifying diets.

Red beetroots have a significant amount of iron, which helps prevent anemia and boosts the regeneration of red blood cells. Furthermore, vitamin C in beets aids in boosting iron absorption.

Betaines, in beets, stimulate the functions of the liver and keep it healthy, according to one animal study. Also, pectin, a water-soluble fiber in these root vegetables, helps flush out toxins from the liver. They are one of the superfoods that have the ability to reverse fatty liver. [9] 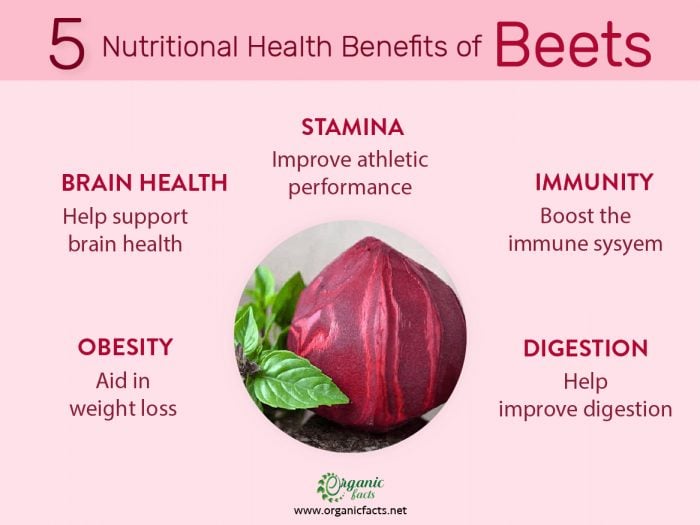 Beetroots are frequently added as an ingredient to salads, soups, and pickles and are also used as a natural coloring agent.

Betaine, present in beets, is a powerful bioactive compound that helps lower the levels of homocysteine in the body. High levels of homocysteine can cause cardiovascular problems, such as heart attacks, and strokes. Betalains further help inhibit chronic inflammation when it comes to heart disease. The fiber in beets helps reduce cholesterol and triglycerides by increasing the level of good HDL cholesterol. The fiber also works to eliminate excess LDL (bad) cholesterol from the body quickly. Thus, the consumption of beets helps prevent cardiovascular diseases such as atherosclerosis in multiple ways, as per a study published in the journal Nutrients. [10] [11]

May Act as Aphrodisiac

Beets have been considered an aphrodisiac, or sexual booster for millennia. Part of this stems from the fact that beets contain significant levels of the mineral boron which helps boost the production of sexual hormones. This may lead to a boost in libido, increased fertility, improved sperm motility. Your sexual life can get a legitimate and time-tested push in the right direction by adding beets to your diet.

Beets are good for pregnant women since they are a source of B-vitamin folate, which helps in the development of an infant’s spinal column. The deficiency of folate can lead to various birth defects such as neural tube defects. [12]

Beetroot is a source of vitamin C that can help prevent asthma symptoms. Besides defending against the effects of free radicals in the body, the vitamin also stimulates the activity of white blood cells, which are the body’s main line of defense against foreign bodies, as well as viral, bacterial, fungal, and protozoan toxins that can result in a multitude of infections and illnesses. [13]

Beets are extremely nutrient-dense which helps boost immunity levels in the body and it is known to fight fever and colds. Vitamin C, B-complex, and powerful antioxidants in these root vegetables help prevent fatigue, soothe minor aches and pains, and reduce inflammation.

The beta-carotene present in beetroot aids in reducing or slowing macular degeneration in the eyes. Macular degeneration is often associated with an increase in free radicals, which drastically affect the premature aging process of many people. Beta-carotene is a powerful form of vitamin A, which has antioxidant properties and defends the eyes against the damaging effects of free radicals, according to a study published in the journal Food Chemistry. [14]

The presence of beta-carotene, which is a form of vitamin A, in beets helps prevent age-related blindness called cataracts. [15]

The flavonoids and vitamin C in beets help support the structure of capillaries, which are the smallest blood vessels in the body. [16]

Potassium-rich beetroot helps lower the risk of stroke and other heart issues. Potassium is a vasodilator, meaning that it relaxes the blood vessels and reduces blood pressure throughout the body. Therefore, an adequate intake of potassium – and foods containing potassium like beets is recommended as a food to improve heart health.

The minerals in beets such as boron, copper, and magnesium help bones develop normally and boost bone metabolism. These root vegetables also contain potassium, which conserves calcium within the body and reduces the loss of calcium through the urine.

High in folate, beets help in the optimal functioning and repair of cells. This helps prevent premature aging. Abundant in antioxidants and vitamin C, beets are a natural way to ensure the glow on your skin!

Beets can be eaten in many ways but before consuming them, you need to remove the thin skin. Here are some of the ways you can use beets in your daily diet:

Beets, if eaten in excess, may cause the following problems: