The phytonutrients are where the health benefits of watercress are contained. According to the USDA, watercress contains vitamin A, vitamin B6, vitamin B12, iron, magnesium, calcium, and phosphorus. It is low in calories and so makes for a great addition to many weight-loss diets. [1] 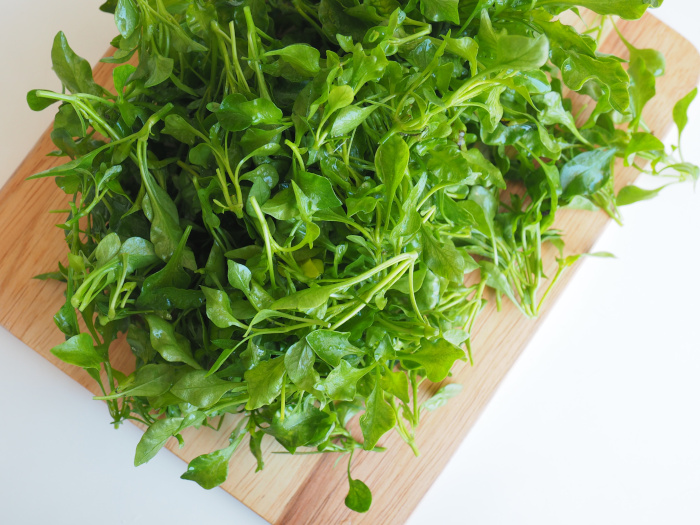 The American Journal of Clinical Nutrition suggests that cruciferous vegetables may be helpful against cancer. Watercress has may help to lower the risk of cancer by decreasing DNA damage. [3]

Dr. Jonathan Swann et. al. from the Department of Surgery and Cancer, Imperial College London, carried out research on the impact of watercress on cancer. The findings of the study suggest that it has anticancer potential and it is also capable of helping in radiotherapy. [4]

Research published in the Nutrients journal suggests that watercress and broccoli extracts have shown an antiproliferative effect when it comes to colorectal cancer. [5]

Cruciferous vegetables like watercress are shown to be beneficial in lowering LDL or bad cholesterol. [6]

The Journal of Ethnopharmacology has published an article, which states that watercress has definite potential to protect your cardiovascular health. It suggested that this green vegetable could help to lower the bad cholesterol levels. [7]

Studies also suggest that watercress helps in regulating blood pressure as it is a rich source of nitrate. [8]

Studies show that the including of calcium-rich food such as watercress works in reducing the risk of osteoporosis. Calcium may help to repair and build the bones by increasing the production of osteoblasts, the cells responsible for this beneficial activity. [9]

Watercress may also be a good source of folate, which can play a direct role as an interactive nutrient in maintaining bone density. Post-menopausal women may also benefit from folate in their diet as a preventive against osteoporosis.

Including different vegetables in your diet can help you take your health to a great level. Foods like watercress are known to have a considerable amount of carotenoids. These compounds can prevent the occurrence of chronic conditions like stroke as they have possible antioxidant and anti-inflammatory properties. [10]

Cruciferous vegetables like watercress are possibly rich in isothiocyanates. Research published in 2018 in the peer-reviewed journal Molecular Nutrition & Food Research shows that broccoli and watercress have the potential to help prevent brain disorders. Moreover, these vegetables also help in delaying brain aging. [11]

Watercress contains a huge amount of vitamin C, which is beneficial in improving immunity. It helps to increase the number of white blood cells in the body so that you are able to fight infections. [12]

Intake of vitamin C-rich food such as watercress is also beneficial in reducing the risk of blood cell damage and common colds.

A 2016 study suggests that vitamin C might be effective in reducing the risk of cataract development. An inclusion of watercress with a good amount of vitamin C may be beneficial in protection against cataracts. [13]

Vitamin C rich food is known to be an effective remedy for the common cold. A study on this immune protective ability of vitamin C shows that consuming food rich in vitamin C may reduce the risk of a cold by 66 %. Watercress is a good source of vitamin C.

A study on children suffering from asthma showed results of significantly increased forced expiratory volume (FEV) with vitamin C of at least 0.2g daily. These results varied with each child’s history of mold and dampness exposure. Those having no exposure saw a 37% increase and those with exposure, saw a 21% increase of FEV per second. Intake of food such as watercress may provide relief from pediatric asthma. [14]

Rate this article
Average rating 4.1 out of 5.0 based on 503 user(s).
Read This Next:
Popular Articles