There are many reasons a person might need heavy cream substitutes, such as dairy-free diets like veganism, or lactose intolerance. You might also be looking for a way to cut out some of the fat and calories in a given recipe.

Heavy cream is a milk product that has a fat content of over 35%. The high-fat content reduces curdling from heat, which makes heavy cream a great ingredient for sauces and soups. It can also be whipped into peaks, which is why you might see heavy cream labeled “heavy whipping cream” in grocery stores. Heavy cream is used for making whipped cream, desserts, icing, and as a key ingredient in many savory dishes. [1]

Having said that, there are times when heavy cream may be unavailable, but fortunately, there are a number of alternatives to heavy cream that will help keep your recipe on track. The substitutes include milk and butter, coconut cream, Greek yogurt and milk, and silken tofu and soy milk among others. 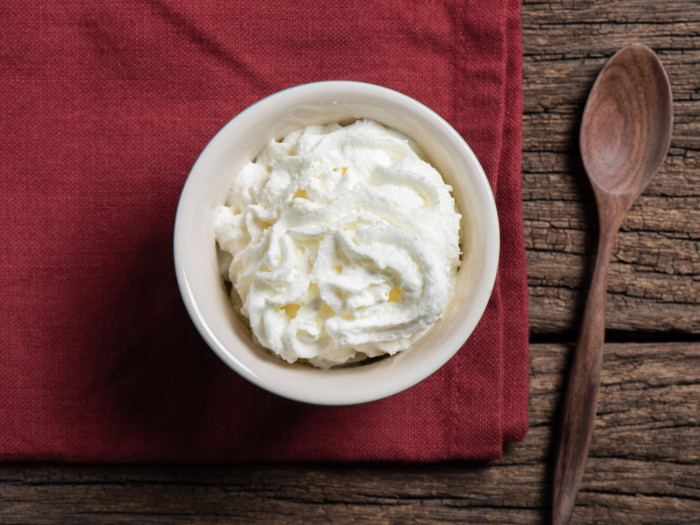 Heavy cream, or heavy whipping cream, is the thick part of the milk that rises to the top due to its high-fat content. Photo Credit: Shutterstock

The most popular heavy cream replacement for most chefs is this easy blend. ¼ cup of butter mixed with a ¾ cup of milk will give your recipe the high-fat content it requires from the cream. This substitute works very well in most recipes, but it cannot be used to make whipped cream, as it lacks the stability of heavy cream. [2]

Greek yogurt, or any high-fat plain yogurt, can be mixed with regular milk to create the texture and density of heavy cream. It will also add protein to your recipe. However, the flavor of plain yogurt is very sharp, and depending on the dish, it may alter the flavor profile.

Coconut cream is a wonderful vegan substitution for heavy cream. Coconut cream is the hard-cream that can be skimmed off the top of full-fat coconut milk. Due to its high-fat content, it can not only be used in cold desserts but also made into whipped cream. If you can’t find a can at your local grocery store, simply buy a can of full-fat coconut milk and chill it overnight. The cream will readily separate to the top! [3] 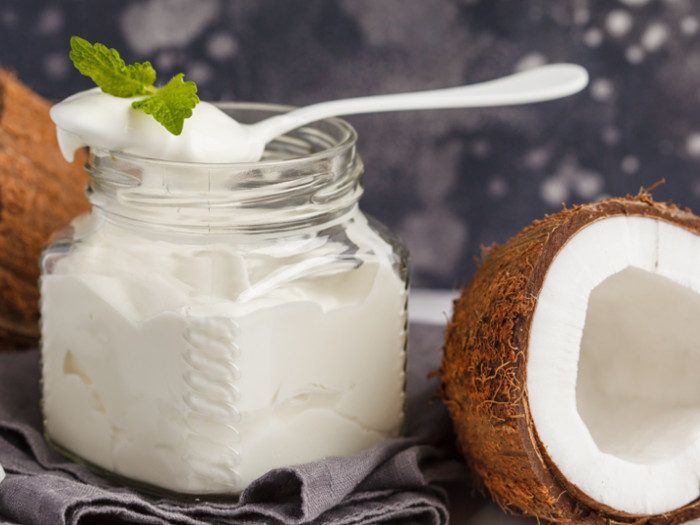 Coconut cream is a traditional food ingredient used in many parts of the world, particularly Asia and Africa. Photo Credit: Shutterstock

Another dairy-free alternative, combining equal parts soft, silken tofu with your favorite unflavored soy milk in a blender will give you a thick, creamy consistency. You can also use other plant-based milk if you prefer. This substitute can be used not only as a substitute in cooking and baking recipes but can also be made into vegan whipped topping. [4]

An interesting duo, using olive oil with plain soy milk makes for an easy alternative for heavy cream. The use of soy milk or almond milk instead of regular milk and olive oil instead of butter makes this an option that is both dairy-free and vegan. As with many of the substitute options, this works best in those recipes that don’t require whipping of the heavy cream.

Heavy cream is usually used to thicken sauces or soups, as is cornstarch too. It is advisable to start with milk to get the dairy base that heavy cream has – then add cornstarch to give it a thickening consistency. In order to reduce the fat content, opt for skimmed milk.

This would not be a healthier alternative but comes handy if you need a distinctly close substitute for heavy cream. Half-and-half basically refers to low-fat cream, so using this plus butter to increase fats makes for a better option. This is one of the few substitutes that can be beaten just like heavy cream.

When compared to heavy cream, evaporated milk has fewer calories and even lesser saturated fats. Moreover, it is canned, which makes it a convenient backup to store in your pantry.

You should use it as a substitute in any recipe that requires heavy cream to be incorporated as a liquid, but not where whipping is required. In case, you are making a dessert, adding a few drops of vanilla extract will enhance the sweetness.

It is good to use an equal amount of cream cheese and milk for a cup of heavy cream. Just mix half a cup of cottage cheese and a half cup of milk until all the lumps are beaten. It is important to have a thick consistency. You can also use just plain cottage cheese with a bit of water to help with the emulsion. But, milk helps in creating that creamy flavor.

This alternative of heavy cream has fewer calories and fat. It is creamier and thick and makes a good option for heavy cream substitute. However, it is important to note that cream cheese has a dash of sourness that might not work well with sweet dishes.