Children behave in many strange ways, but temper tantrums may be the worst; fortunately, there are many natural ways to prevent temper tantrums in your children, including preventing fatigue, avoiding hunger situations, massage, yoga, aromatherapy, valerian, banana, chamomile, hiding temptations, and communicating with your child, among others.

What are Temper Tantrums?

Whether you call them meltdowns, hissy fits or temper tantrums, we all know what it can be like when a child falls into wild hysterics. You’ve probably seen it at grocery stores, malls, parks, or in your own home! These emotional outbursts are most commonly seen in toddlers, and young children who haven’t developed complete emotional control. These tantrums can manifest in crying, whining, stubbornness, screaming, inability to be pacified, and sometimes violent physical actions. In many cases, toddlers seem to even be out of their own control, and even logic fails to remedy the situation. For example, if you give in to the child’s demands that sparked the temper tantrum, that is no guarantee that the tantrum will stop! Some of the most common causes of temper tantrums are fatigue, hunger, and feelings of being ignored, but they can also be caused by a range of other conditions, such as autism or social anxiety disorders. [1]

Pacifying a toddler or child can be difficult in the moment, but there are a number of ways that temper tantrums can be controlled or prevented before they even begin. Temper tantrums can be indicative of other emotional and psycho-social problems in a child, and may be a predictor of certain anxiety issues in the future, so helping kids eliminate temper tantrums as their emotional outlet is important! While tantrums of one kind or another can progress into later life, particularly for those suffering from diagnosed mental and social disorders, it primarily affects children. For parents or guardians with children prone to meltdowns, here are some of the most effective ways to prevent temper tantrums. [2] 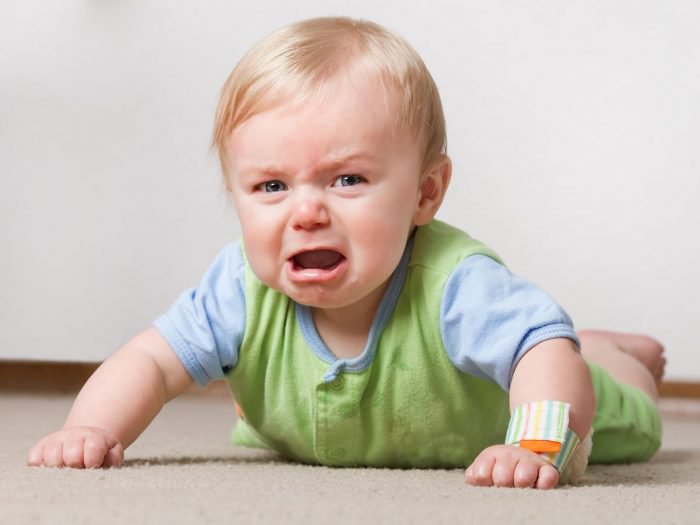 Babies can cry for many reasons, such as hunger, discomfort or just boredom. Photo Credit: Shutterstock

In the effort to treat or prevent temper tantrums, there are both behavioral and herbal remedies, but one of the most effective is massage. If your child seems to hold high levels of anxiety, which spill over into outbursts and meltdowns, then simple massage therapy can be used  in the home. Just as it relieves stress in adults, a basic massage can soothe a child’s nerves and prevent the bottling up of tension and frustration. [3]

As a parent, it is difficult to listen to everything that your child is saying or demanding, because parenting is a tough job! However, opening up a line of communication between you and your child, particularly if they are prone to emotional outbursts, may encourage them to be more open with their emotions, and you may be able to identify the root cause of the problem before your toddler makes a scene in the produce aisle. [4]

Children have endless curiosity and inherently hedonistic tendencies. When they see something they want, it can be difficult to reason with them or rationalize why a chocolate bar at 9am is a bad idea. Therefore, to avoid these daily debates over treats and temptations, keep the truly great snacks, candies and toys out of sight, so the temptation is never even realized by your toddler. [5]

Chamomile is one of the most soothing herbal teas around, and can have a profound effect on mood for everyone – even children. Although limited use is recommended, the soothing and anti-anxiety aspects of chamomile can be a wonderful way to prevent a temper tantrum, especially if your child seems prone to high-energy and highly emotional meltdowns. [6]

In a similar way to chamomile, valerian is a powerful herb that calms the nervous system and is a natural sedative. Supplements are harmless, but you should speak to a doctor before giving this to your child, to ensure that you are giving the right amount. However, as home remedies go, valerian may be one of the best and most reliable ways to prevent temper tantrums. [7]

We usually associate yoga with adults, but yoga for kids is an increasingly popular trend, particularly in metropolitan areas where kids often seem as active and busy as adults. Just as it does for adults, yoga can be a way for children to learn how to harness and understand their emotions, rather than letting them explode in emotional outbursts. [8]

Bananas possess high levels of potassium, which has been directly linked to a reduction in stress-induced anger. Considering that a temper tantrums are anxiety-induced episodes, boosting potassium levels is a wise idea, and a delicious one that will give your children a number of other health benefits too! [9]

When children get tired, they get cranky. This universal piece of knowledge is something that all parents understand, and when children get cranky, they use temper tantrums to express their displeasure – essentially saying, “Something’s not right”. Ensure that your child gets a proper amount of sleep each night, and if they need naps throughout the day, make sure they get some undisturbed rest. Fatigue makes adults cranky too, and it’s even worse for children. [10]

The calming power of aromatherapy is just as effective for children as it is for adults. Some naturally soothing scents like lavender, rose and vanilla can be a quick and stress-free way to calm your child down and generally increase the peace in your house. Some passive aromatherapeutic approaches, like burning essential oils in the home, can help to permanently keep temper tantrums under control. [11]

Aside from fatigue, the other main cause of temper tantrums is hunger. When children are hungry, they want to eat RIGHT NOW, and given that their social constructs of patience and logistics aren’t fully developed yet, it can be difficult to talk them off the ledge, so to speak. Always keep a healthy snack on hand when you’re going out for the day with your child, but avoid sugary foods, as they will give a quick energy boost, and then the sugar crash, which will almost certainly result in a temper tantrum. [12]

Many children throw temper tantrums in order to gain attention. Although toddlers are fascinated with autonomy, they still need love and attention from their parents, and when they feel ignored or marginalized, they may lash out emotionally with a temper tantrum. Respect what your children have to say, and don’t dismiss their demands and feelings just because they are young and whining. Children often know when they’re being manipulated, so honestly listen to what they’re saying and try to grant their wishes, within reason. [13]

One of the best ways to prevent a temper tantrum is to distract your child in some form, and a great approach to this is offering control. Allow a toddler to push a shopping cart, hold a bag of groceries, or choose which aisles or stores to enter. Giving some modicum of control encourages maturity and discourages childish and overly emotional behavior, which could effectively prevent temper tantrums. [14]

Rate this article
Average rating 4.1 out of 5.0 based on 10 user(s).
Read This Next:
Popular Articles