For many people, eating something called snake fruit may not sound appealing, but salak is a very popular fruit in some parts of the world. With its growing popularity and availability around the world, it is important to understand the nutrient composition of salad, as well as some of its potential health benefits and proper ways to eat this unique fruit.

Salak is actually the name of a type of palm tree that is native to areas of Indonesia and parts of the South Pacific. These trees are cultivated for their fruits, which are found clustered near the base of the tree, and have a unique red, scaly exterior, which earns it the nickname snake fruit. These fruits are only about the size of figs and may resemble a large garlic clove when peeled. [1]

Its rough outer texture can be peeled away by pinching one end and inside it are three lobes, two or three of which contain large seeds. The taste is slightly acidic and the texture is similar to apples. There are three main cultivars of salak on the market, gula pasir being the most expensive and sought after. Salak can also be made into alcoholic beverages of a similar quality as grape-based wine.

Each fruit contains an inedible seed, but the flesh surrounding it is consumed for its sweet and often astringent flavor. This unusual flavor makes salak a popular ingredient in many different types of cultural dishes in the South Pacific and neighboring areas. There are more than 30 cultivars of this fruit, but most have a similar nutritional profile, albeit a slightly different taste and level of astringency. 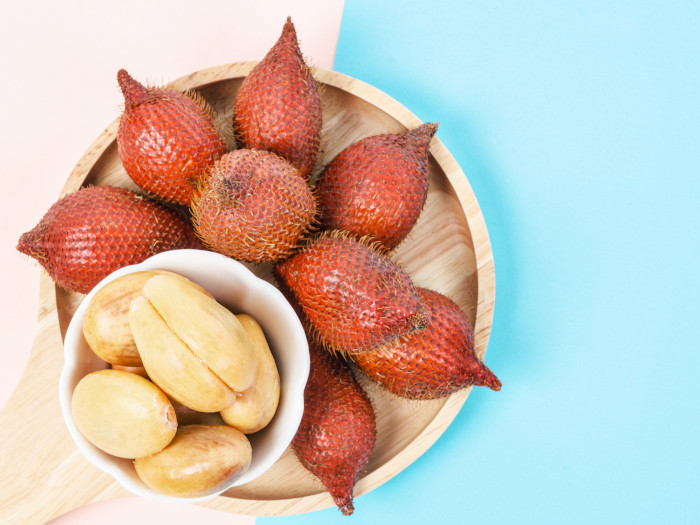 Snake fruit is similar in size and shape to a fig, with a bulbous body that tapers to a point at one end. Photo Credit: Shutterstock

Salak is not only a great fruit to include in your food for its flavor, but also for its nutrient content, which includes high levels of dietary fiber, protein, sugars, potassium, iron, calcium, phosphorous, vitamin C, and vitamin A, as well as various antioxidants and active ingredients. There are only 82 calories in a 100-gram serving of salak primarily composed of carbohydrates, 4% fats, and 1% protein. This also means that it has a low impact on your overall caloric intake. [2] [3]

Thanks to the minerals and active ingredients in this fruit, such as potassium, beta-carotene, and pectin, this fruit is able to increase blood flow to the brain, which can boost cognition and improve your memory power. One of the nicknames of salak is “Memory Fruit”. It also helps in eliminating oxidative stress and lowering your risk of neurodegenerative diseases. [4]

Studies have found that salak is able to increase stamina and stimulate the metabolism, which can provide a solid boost to your energy levels. The carbohydrates found in this fruit are also good for maintaining energy levels throughout the day.

There is a high level of dietary fiber in salak, which is ideal for increasing feelings of fullness and preventing unnecessary snacking and overeating. This also improves digestive efficiency and eliminates symptoms of constipation, bloating and cramping. [5]

The potassium found in salak help it lower your blood pressure, as potassium is a vasodilator. This means that it can reduce the tension in blood vessels and arteries, which lowers overall strain on the cardiovascular system. [6]

Beta-carotene is one of the antioxidants found in salak, which has a direct link to vision health. Having enough beta-carotene in your diet can lower your risk of macular degeneration and slow the progression of cataracts as you age. [7]

According to a recent animal study by the Asian Pacific Journal of Tropical Medicine, snake fruit prepared vinegar with a high content of polyphenols has a significant effect on the lipid profile of the treated diabetic subjects. Moreover, it was observed that blood glucose levels also decreased. [8]

Salak has traditionally been used for heartburn as well in many of the native populations of Asia that have considered it an important part of their diet for hundreds of years.

How to Eat Salak (Snake Fruit)

Eating this fruit can be a daunting task, given its appearance and texture, but preparing and eating salak is easier than you might expect. With a textural consistency similar to apples, this fruit is not only rewarding to prepare but delicious to eat!

Rate this article
Average rating 3.9 out of 5.0 based on 124 user(s).
Read This Next:
Popular Articles