Skim milk is one of the most popular varieties of milk on the market. If you are someone who wants to know more about it and indulge in this type of milk, then read ahead.

What is Skim Milk?

Skim milk is obtained after removing all the fat from whole milk. It is also known as fat-free milk or nonfat milk as it is a lower calorie and low-fat version of traditional full-fat milk. The majority of low-fat milk is fortified with vitamin A and vitamin D since these fat-soluble vitamins are often lost when the fat is extracted from whole milk. [1]

Unlike what many people believe, skim milk contains the majority of nutrients of regular milk and is not “watered down”. While it does lack some of the flavors of whole milk, it can be an important alternative for people who are struggling with obesity. In the past, nonfat milk was made by allowing regular milk to sit and separate – allowing the high-fat cream to rise to the top, where it could be “skimmed” off the top and removed. Today, it is typically made through a process of centrifugal separation, in which most or all of the fat molecules are separated from the remainder of the milk. The milk is then homogenized, preventing any additional separation between the molecules, as they are all made of the same size. 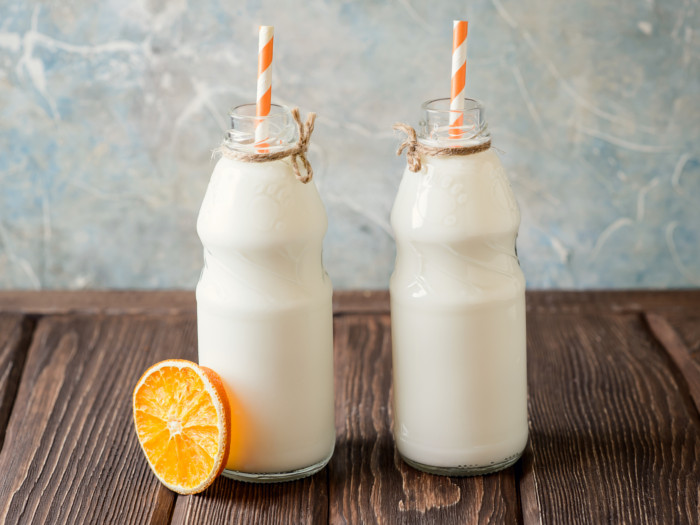 Skimmed milk is acquired by removing all the fat and cream from the milk. Photo Credit: Shutterstock

There are many critical nutrients in skim milk, including a significant amount of protein, calcium, magnesium, phosphorus, sodium, zinc, and potassium. In vitamins, it is rich in vitamins A, B2, B3, B6, B12, and D,  as well as thiamine and folate. A cup of skimmed milk has 8 grams of high-quality, complete protein, which contains all essential 9 amino acids required for growth and development.  It is low in calories and has a very low level of cholesterol and fat. [3]

The most important benefits of skim milk include its ability to build and maintain lean muscle, lower risk of osteoporosis, strengthen teeth, boost weight loss, improve cholesterol levels, among others.

Skim milk is a rich source of protein, which is responsible for building and maintaining lean muscle mass. This is very important for people with obesity. [5]

Calcium, which is found in high levels in this milk, is integral to muscle and overall nervous system function. This critical electrolyte level must be maintained for normal activity. [6]

Low-fat milk contains a good amount of protein, which helps in the proper growth and development of bones, muscles, cells, and tissues. [7]

As compared to whole milk, skim milk contains a very low amount of saturated fat. Also, with its low cholesterol levels, skim milk can lower your risk of atherosclerosis, and thus protect against other cardiovascular problems, such as heart attacks and strokes. [8]

The rich density of minerals is ideal for boosting bone strength and reducing your risk of developing osteoporosis at a young age, helping you feel strong as you age. [9]

There is a good amount of potassium in skim milk, which can help to control blood pressure by relieving strain and tension in blood vessels and arteries. [10]

Skim milk has been glorified for a long time but researchers have found that some of the benefits are too good to be true.

In terms of weight loss, the European Journal of Nutrition says that high-fat milk is not correlated with obesity, which means that shifting to skim milk is not necessarily leading to weight loss. [11]

While many people suggest having skim milk for managing diabetes, a 2018 comparative study suggests that there is no difference in the fasting blood lipids, glucose, or insulin levels when whole milk is consumed. In fact, whole milk can actually prove beneficial for people with normal cholesterol levels. [12]

The different types of skim milk are:

Despite the obvious reduction in fat, calories, and cholesterol, there are some disadvantages to drinking this milk, which include:

Rate this article
Average rating 3.9 out of 5.0 based on 151 user(s).
Read This Next:
Popular Articles