Among 720 species of mushrooms, Turkey tail mushrooms are known for their therapeutic purposes. Mushrooms are a favorite among many people for their taste. But it is often unknown to common people that mushrooms have great medicinal values as well. In fact, there are many kinds of mushrooms which have been used in Asia for a very long time for medicinal purposes. Mushrooms are usually harvested in areas of their natural growth. However, throughout the years it has been possible for mankind to cultivate them and use them for their own purposes for quite a number of years now.

Several kinds of research and experiments have been going on for a number of years now around the globe regarding the benefits and uses of turkey tail mushrooms. It has been an active ingredient of Chinese medicinal tea. [1]

Turkey tail mushrooms are known for their numerous health benefits. These mushrooms are commonly found in the woodlands of Europe and China. They are usually found to grow in large colonies. Turkey tail mushrooms are generally multi-colored and have concentric bands of contrasting shades. They appear in shades of black, brown, gray, red, white or blue. The body is thin and velvety with a fruiting nature. Because of their capability to form wavy rosettes, they have the name of Turkey Tails.

The turkey tail mushrooms are devoid of fat and caffeine. The content of sodium in this mushroom is also reasonably low. This kind of mushroom is also free from cholesterol and gluten and are low in calories. Turkey tail mushrooms contain 18 types of amino acids, ergosterol, and Beta-Glucans of 1/3 and 1/6. Ergosterol gets converted to vitamin D on exposure to the sun.

There are many health benefits of turkey tail mushrooms. These include the prevention of cold, providing support during chemotherapy, managing diabetes, reducing inflammation, lowering cholesterol, and more. Let us discuss them in detail below. 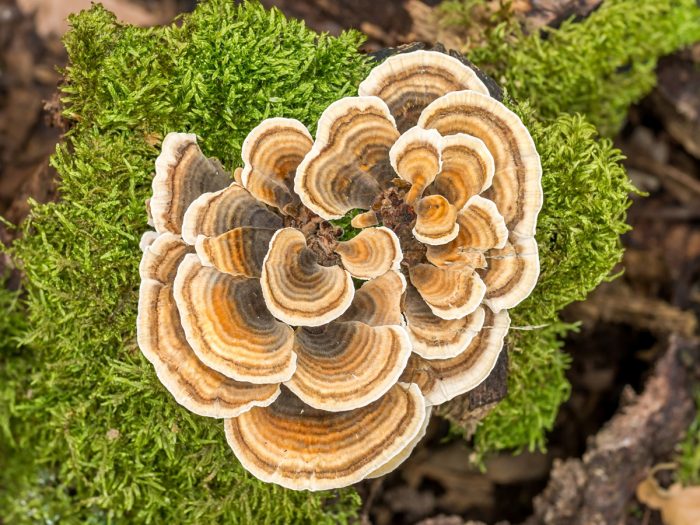 Turkey tail is a medicinal mushroom with a variety of powerful antioxidants. Photo Credit: Shutterstock

Because of the strong anti-viral and anti-microbial properties of Turkey tail mushrooms, they can fight away various infections caused by these microbes, including common cold and flu. They greatly improve the immunity of the system and thus make them stronger to fight against disease-causing germs. It is a good idea to include a turkey tail in the diet when the season of flu draws nearer. The turkey tail mushroom modulates the immune system to act in a stronger way of fighting infections and germs.

Turkey tail mushrooms, also known as Yun Zhi in Chinese have been used as a magic drug for the reduction in the risk of cancer since ages. However, the evidence is now coming to light as researchers are taking an active interest in the cancer-preventive properties of this mushroom.

It comes as a surprise to find that these fungi also help in saving dogs from hemangiosarcoma, which is a highly invasive variety of cancer occurring mostly in dogs but also found in horse and cats sometimes. Although human studies are yet to be done, doctors see the potential of these mushrooms in improving the mortality of cancer patients. [3]

May Help in Improving the Effect of Cancer Treatment

A 2012 study by the Chinese University of Hong Kong and Prince of Wales Hospital, Hong Kong revealed that Turkey tail mushrooms are also linked to having a survival benefit on patients with breast, gastric and colorectal cancer. [5]

Turkey tail mushroom helps in reducing diabetes by lowering the level of glucose in the body. According to an animal study report by the World Journal of Diabetes, the consumption of mushrooms caused a decrease in blood glucose concentration and promoted weight gain in the diabetic subject. [6]

Being rich in antioxidants, it helps in the protection of the body from the harmful UV radiations of the sun. They also block the free radicals that result in aging. Thus, it slows down the process of aging. Being rich in Vitamin E, it also acts towards making the skin better and cleansing it naturally. [7]

High cholesterol leads to various kind of heart diseases. Turkey tail mushrooms help in reducing the levels of cholesterol by adding it in the daily diet.

The mycelium is that part of the mushroom which enables a person to have a smooth process of digestion. The microbiome gets assisted by the prebiotic content of the turkey tail mushrooms. This implies that the growth of the good and beneficial bacteria in the body is enhanced which includes acidophilus as well as Bifidobacterium. It also helps in the treatment of leaky gut syndrome. The process might also help in losing weight.

Hypertension or increase in blood pressure occurs due to the rise in pressure in the arteries carrying blood. Turkey tail mushrooms help in reducing the pressure, and thus hypertension.

Another health benefit of turkey tail mushrooms is that they are good for bone health. Not just this, but studies have shown that they can also help in regenerating bone marrow.

Human papillomavirus (HPV) is an infection whose symptoms are known to be treated by turkey tail mushrooms within a reasonably short time of consumption, approximately two months. [8]

Turkey tail mushrooms are well known for their medicinal purposes because of which they are a sought-after product among the leading pharmaceutical companies. Researches are going on throughout the world to dig out more treasures this mushroom has to offer.

Rate this article
Average rating 3.9 out of 5.0 based on 67 user(s).
Read This Next:
Popular Articles