Never was the ownership of a dish as disputed as dolma. The name may come from Turkey, but it is beloved all across the Middle Eastern and Mediterranian region with every country claiming it as its own. In Greece, it is known as dolmades and in Azerbaijan it is dolmasi. Whatever the location, dolma is a delicacy, prepared painstakingly and meant to be savored on special occasions. Even the rolling of the dolma is an occasion in itself. The Armenian dolma made all the way to the UNESCO Intangible Cultural Heritage Lists. It is one of those dishes that are so rooted in history and culture of a place that it cuts across cultural, linguistic, nationalistic, and religious barriers. In fact, dolma is one dish that unifies an otherwise deeply fractured region.

Dolma is a popular dish where spiced meat or rice is wrapped in a vine or cabbage leaves. The stuffed-leaves version is the most popular form of dolma. However, it is also made by stuffing a whole range of vegetables and fruits. This includes eggplants, tomatoes, onions, cucumbers, quinces, and apples. The word dolma may have its origin in the courts of the Ottoman empire, but many believe it predates the empire by many centuries. This dish has been made in some form or the other across this region. 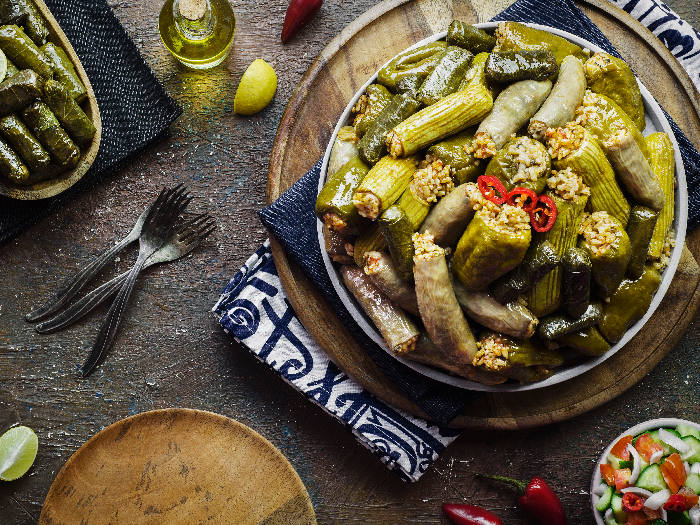 The dolma, no matter where the cook is from, follows an almost same procedure with regional and seasonal variations. The vines are stuffed with a mix of rice, meat, nuts, and spices. The vegetarian version (often jokingly called the ‘fake’ dolma) omits the meat. The rolled dolmas are often cooked in a tomato gravy. You can find sweet and sour versions, such as those made by Iraqi jews. The ancient Greeks made a sweet version with fig leaves and cheese.

Dolma also cuts across religious lines. In the Middle East, it is prepared in all festivals, no matter what the occasion. For instance, the Muslims make it during Ramadan and the Christians prefer the vegetarian version during Lent. It is a special celebratory dish during Norouz, the Iranian New Year.

How to Make Dolma?

Making dolma can take some time, but it can be curiously therapeutic. It is the perfect rainy day activity. Preparing the filling, rolling the leaves or stuffing the vegetables, and then cooking them is not something you can finish in a hurry. But, putting a plateful of dolmas for family and friends and watching them enjoy these morsels of joy is what every cook lives for! 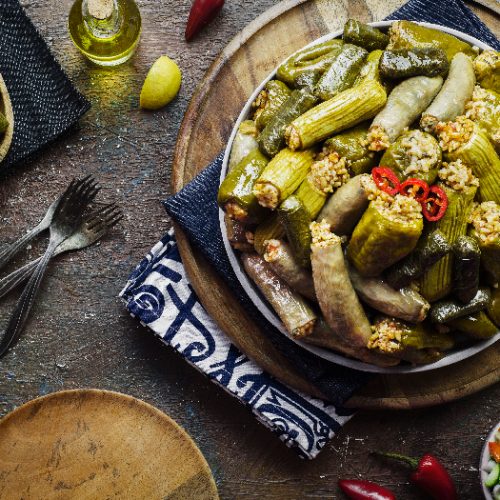 For the yogurt sauce

For the olive oil sauce

We have offered a traditional dolma recipe, which can be easily adapted for vegetarians. Some other tips you should keep in mind:

How to eat it: Bursting with flavor, dolmas are perfect finger food. Just pick up one roll and finish it in two bites! However, for a formal occasion or sit-down dinner, you may want to mind your manners and use a knife and fork. We recommend you take the cue from your surroundings. Dolmas are usually served with a yogurt or olive oil sauce. Those cooked in tomato sauce are served with the reduced sauce. Vegetarian dolmas are often eaten cold. However, the meat-filled dolma is eaten warm.

So, start making dolmas and share your experience with us. If you have a different recipe for the stuffing, share it with us. We would love to hear from you. If you love Middle-Eastern food, read more about the food from the region.