For thousands of years, people have been using essential oils for poison ivy, due to their anti-inflammatory, analgesic, antiseptic, and antibacterial properties. Poison ivy is a plant that grows in many parts of the United States, typically either as a shrub or a trailing vine, depending on your region.

Scientifically known as Toxicodendron radicans, this plant causes serious allergic reactions in more than 80% of the people who come in contact with it, and can cause severe reactions in a smaller segment of the population. If eaten or smoked, this plant can be fatal. The most identifying characteristic of this unassuming plant is the three-pointed leaf clusters, which tend to have a glossy surface. The sap of these leaves is extremely high in an irritating chemical named urushiol, which is what causes the reactions on the skin.

The symptoms of poison ivy can develop if you physically touch the plant or if the sap has been brushed on any other object, ranging from your pant leg or shoe to your pet or lawn furniture. The most notable symptom is extreme itchiness, along with redness or swelling of the skin in a spreading rash. In severe reactions, blisters or hives may also appear. [1]

Simple solutions like washing or taking anti-inflammatory medication may help some of the symptoms, but the use of essential oils for poison ivy is an even more effective solution. While there are some risks to treating poison ivy in this way, moderate and responsible use can quickly treat this painful and irritating condition.

If you choose to use essential oils for poison ivy, some of the best options are myrrh, cypress, lavender, tea tree, peppermint, eucalyptus, geranium, helichrysum and rose oils. 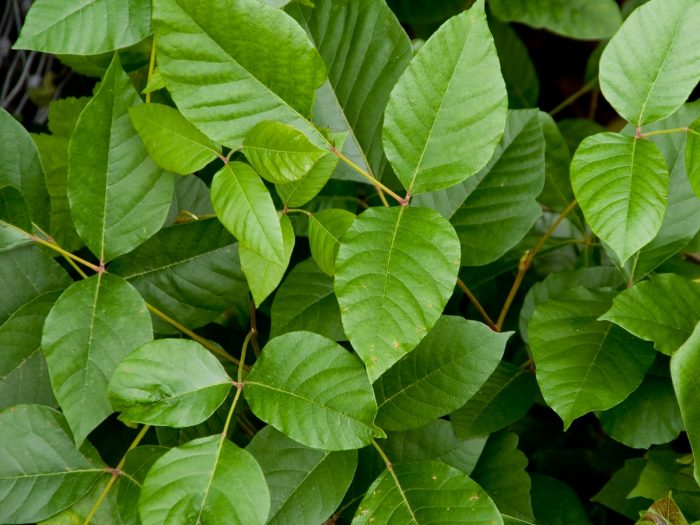 Poison ivy is a plant that can cause an itchy rash when touched. Photo Credit: Shutterstock

This essential oil boasts a number of powerful active ingredients including menthol, which can remove the heat and pain from your poison ivy rash. It will quickly soothe inflammation and promote faster recovery of the damaged skin. [2]

How to Use – In most cases, you don’t need to dilute this oil on your skin, as it is not known for being toxic and will absorb almost fully into the skin. Simply apply 4-5 drops of the oil to the inflamed areas 1-2 times per day until the symptoms subside.

One of the best things about this oil is its restorative and healing properties. When you use lavender oil on poison ivy symptoms, you can significantly speed up the healing process and soothe inflammation. [3]

How to Use – There is no need to dilute this oil, unless you have a sensitive skin. Simply apply 4-5 drops of the oil on the site of the rash or inflamed skin, and regularly re-apply until the symptoms have faded.

There is always the danger of secondary infections with poison ivy, as people are prone to scratch those areas of skin. Cypress oil has strong antiseptic qualities, meaning that it can protect the rash as it heals, while also soothing inflammation and pain. [4]

How to Use – Mix this oil with a carrier oil, such as coconut oil or aloe vera gel, and then directly apply it to the site of the inflammation 1-2 times per day.

The anti-allergenic qualities of geranium oil can help quickly soothe the rash or itching that is caused by contact. By preventing additional histamines from being released and returning the immune system to normal, geranium oil is a quick and effective solution for poison ivy. [5]

How to Use – Do not use this oil in an undiluted form; instead, mix 5 drops of this oil with 1 tablespoon of coconut oil and then gently massage the mixture into the affected areas on the skin.

This lesser known oil isn’t always considered for therapeutic purposes, but it can help to control the immune system and reduce the symptoms of allergic reactions, which is precisely what a poison ivy flare-up is. This oil will also promote healing and soothe pain when used in moderate amounts. [6]

How to Use – Blend 4-5 drops of rose oil with lavender or peppermint oil and apply the mixture to the inflamed, itchy or swollen areas. Re-apply 1-2 times per day until the symptoms and redness disappear.

By increasing the hydration of the skin and soothing the pain of the rash, myrrh oil can help to speed the healing process following exposure to poison ivy. [7]

How to Use – Many people choose to add 10 drops of myrrh oil to a bath and then take a long soak in the tub to properly soothe and stimulate healing on the painful areas of the body.

Widely considered one of the best essential oils for poison ivy, tea tree oil is able to reduce inflammation, prevent secondary infections, eliminate pain and promote a faster healing process when you’ve brushed up against some poison ivy. [8]

How to Use – You should always blend tea tree oil with other carrier oils, as it can worsen inflammation in some cases. After mixing 5 drops of tea tree oil with 1 tablespoon of olive or jojoba oil, gently massage the oils on the inflamed skin.

If you want to relieve inflammation and soothe a burning and itching sensation on the skin, few things are better than peppermint oil. Packed with antioxidants and active ingredients such as menthol, it is able to cool and soothe inflammation, while also protecting against secondary infections and reducing your urge to itch. [9]

How to Use – You can use undiluted peppermint oil directly on the site of a poison ivy rash, but if you tend to have sensitive skin, you may want to dilute the oil slightly with olive or coconut oil.

There are rejuvenating and anti-inflammatory compounds found in helichrysum oil that can quickly eliminate pain and speed the healing process, while also modulating the body’s immune response to lessen the severity of the allergic reaction. [10]

How to Use – Blend 5 drops of helichrysum oil with 1 tablespoon of coconut oil and then gently massage it onto the affected area. Repeat this process 1-2 times per day until the redness and irritation are gone.

Choosing to use essential oils for poison ivy is an effective remedy, but there are a few risks of which you should be aware. The concentrated chemicals in essential oils can make skin inflammation even worse, particularly in people with sensitive skin, and some people are also allergic to the base plant/herb of certain essential oils. While all poison ivy reactions may seem serious, it is critical to seek medical attention if the rash spreads to a large part of your body, the pain isn’t alleviated by at-home remedies, or if you experience any respiratory symptoms, such as shortness of breath. If you have been exposed to poison ivy, it is usually best to speak with a doctor before going for an alternative remedy such as using essential oils, to determine your individual risks.

Rate this article
Average rating 4.3 out of 5.0 based on 121 user(s).
Read This Next:
Popular Articles