There is a lot of buzz and hype around fish oil, primarily due to the presence of the omega-3 fatty acids in it. There is also a great deal of confusion about the necessity of fish oil in our diet and whether we should consume fish oil supplements or simply eat fish. Let us get into some details to learn more about fish oil, omega-3 fatty acids, EPA, and DHA, as well as how we should consume them.

Fish oil is extracted from tissues of fatty fish, especially the livers. It is rich in eicosapentaenoic acid (EPA) and docosahexaenoic acid (DHA), which are long-chain polyunsaturated fatty acids (LC-PUFAs). Both EPA and DHA are converted in the human body from dietary alpha-linolenic acid (ALA), a short-chain polyunsaturated fatty acid (SC-PUFA). Due to their structure, all of these are a type of Omega-3 fatty acids (Omega-3s).

While ALA is an essential fatty acid (EFA) that cannot be formed in the human body and needs to be ingested, EPA and DHA are ‘conditionally essential’ owing to their inefficient conversion from ALA in the human body. Seed oils of rapeseed, canola, flaxseed, soybeans, and chia are abundant in ALA, whereas fish oil is considered a rich source of EPA and DHA.

In human body, Omega-3s such as EPA and DHA compete with Omega-6 fatty acids (Omega-6s), another class of LC-PUFAs, as precursors to signaling molecules such as ecosanoids. The amount and ratio of Omega-3s and Omega-6s influences ecosanoid-controlled functions such as inflammation and other health conditions. A ratio of 1:1 is considered ideal for maintaining balance in these functions. 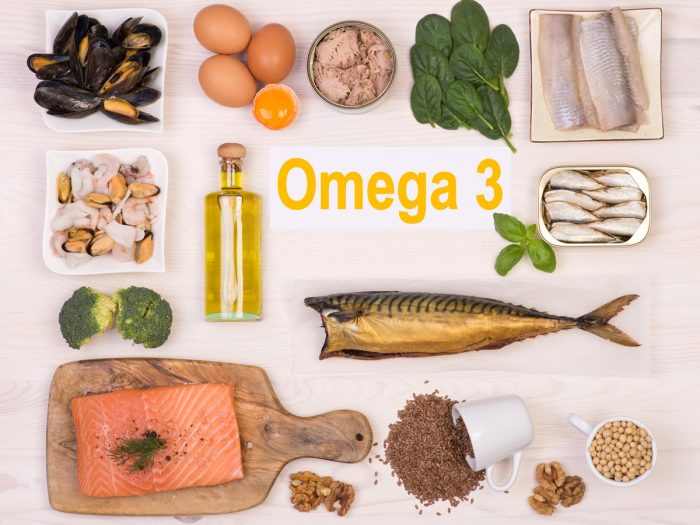 Foods that are good for your brain Photo Credit: Shutterstock

Fish oil, due to its EPA and DHA, is commonly used for diseases of heart and blood system. Other disease conditions for which it is used are those of the brain, eyes, bones, joints and muscles, lungs, immune system, and kidneys.

EPA and DHA from Fish

Do we get EPA and DHA when we eat fish. The answer is yes. The EPA and DHA present in fish oil can be sufficiently sourced from eating fish. Fatty fish such as salmon, mackerel, herring, lake trout, sardines, and albacore tuna are high in these Omega-3s. In wild fish, Omega-3s are higher in summer, while in farm fish, these levels are diet-dependent. Broiled, baked, and other non-fried fish provide them in maximum amounts.

Fish accumulate EPA and DHA directly or indirectly through the smaller fish they prey on, which eat microalgae and other microscopic plant like organisms, which originally synthesize EPA and DHA in their body.

There is a growing concern about some contaminants such as mercury, dioxin, and polychlorinated biphenyls (PCBs) in consuming big fatty fishes such as swordfish, tilefish, albacore tuna, and king mackerel. This risk is more for children, pregnant, and nursing women.

What About Those Who Don’t Eat Fish or Fish Oil?

– Amit Khurana
Amit is a health enthusiast and believes in the importance of ‘what we eat’ in maintaining it. He is an avid writer focusing on research-based facts and opinions on food and nutrients. He likes to provide contrary perspectives to well inform his readers and continues to explore the difference in beliefs on health and food in the eastern and western part of the world. Amit is an occupational therapist and has worked in clinical settings of rehabilitation. He has extensive experience in researching and writing on scientific and commercial aspects of diseases, treatment, diagnostics, devices, and services in healthcare.

Rate this article
Average rating 4.4 out of 5.0 based on 19 user(s).
Read This Next:
Popular Articles