Some of the health benefits of salsify include its ability to lower blood pressure, boost the immune system, stimulate hair growth, increase circulation, improve numerous elements of your digestive health, increase the metabolism, and positively affect bone mineral density.

Salsify is the name given to a few different plants in two different genera, both of which are in the sunflower family, Asteraceae. The more popular and common variety is called black salsify or Spanish salsify and has the scientific name Scorzonera hispanica. It is grown as a root vegetable and has large, broad leaves above ground and a long, tapered, black root, sometimes up to a meter long. The fleshy interior of the root is the edible portion, and the black skin of the root is usually removed before preparation.

This vegetable is native to Southern Europe and the Middle East, but its actual point of origin is believed to be in Spain. You rarely see this vegetable outside of Europe, or even in the United Kingdom, as the conditions are not suitable for cultivation. However, it remains very popular in Germany, the Netherlands, Belgium, and other central and southern European countries.

As a food source, black salsify can be eaten as a normal vegetable and is quite complementary to peas and carrots, usually after boiling and removing the skin. It is a popular alternative to asparagus and is prepared in many dishes in a similar way, including in white bechamel sauces with broccoli or cauliflower. If you choose to boil the roots, you can also deep fry them, similar to vegetable tempura.

Although the black salsify “craze” hasn’t spread too far out into the world, it is beginning to occasionally show up in some exotic food stores and import locations in North America. The reason black salsify is so important is that it is chock-full of beneficial nutrients and components that make it a serious booster for human health. Let’s take a closer look. 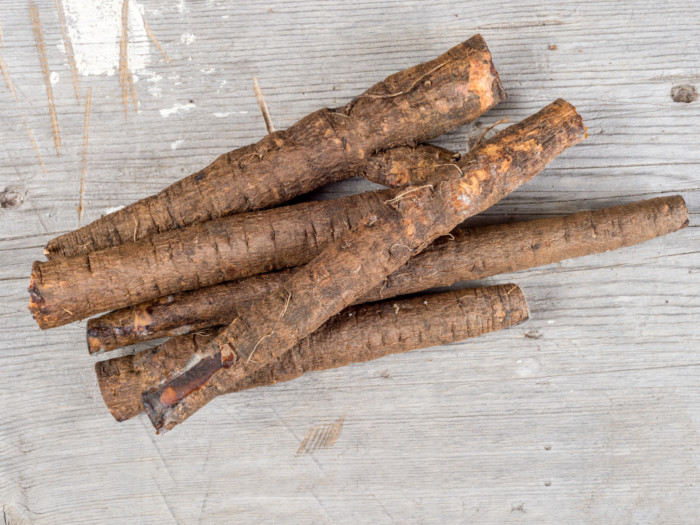 Salsify is a veritable treasure trove of nutrients, including significant portions of iron, potassium, calcium, manganese, phosphorous, magnesium, and copper, as well as vitamins including ascorbic acid, pantothenic acid, thiamine, riboflavin, folate, and vitamin B6. Salsify also has significant amounts of dietary fiber, protein, and inulin.

Health benefits of salsify include the following:

The high content of potassium (15% of the daily recommended amount in a single serving) and the low level of sodium, mean that salsify can significantly improve blood pressure problems by relaxing the blood vessels, reducing the strain on the cardiovascular system, and preventing chances of blood clots, heart attacks, and strokes. Potassium is also an essential element for building strong bones and has even been praised for its ability to boost cognitive ability, possibly due to the increased blood flow to the brain that vasodilation can stimulate.

There are several ways that salsify can help boost the health of your digestive system. A single serving of salsify contains nearly 20% of your daily recommended amount of dietary fiber, which is essential for stimulating the passage of food through your body, decreasing constipation, easing bowel discomfort, and preventing more serious conditions, like gastric ulcers.

Furthermore, much of the fiber is in the form of inulin, which is a relatively rare prebiotic fiber that increases the growth of bifidobacteria in the gut. This can maximize the efficiency of nutrient absorption, and provide a boost to the immune system.

The high levels of iron and copper found in salsify mean that your circulation will improve, as iron and copper are both essential for the creation of red blood cells. More RBC means more oxygenation to important tissues and organs, including the follicle beds. Salsify has been shown to stimulate the re-growth of hair. Furthermore, copper on its own has been linked to increased hair strength and a reduction in premature graying.

The combination of vitamin C, as well as significant levels of other vitamins and minerals that improve metabolic efficiency and functionality throughout the body, also helps the immune system. Vitamin C stimulates white blood cells, vitamin A functions as an antioxidant, and B-family vitamins range from increasing enzymatic functions to regulating hormones. Salsify has such a diverse range of nutrients that almost every organ system is somehow affected, meaning that the body is working in top form.

Significant levels of magnesium, phosphorous, calcium, copper, iron, and manganese are present in salsify. It can prevent the development of common, age-related conditions like osteoporosis and even arthritis, which can occur when bones begin to degrade and connective tissue (collagen) no longer maintains the integrity of your joints.