In today’s fast-paced world, many people rely on herbs for energy, as they are a natural and non-addictive means of boosting vitality. Many people drink coffee or an energy drink to help them get through a busy day, but there are negative side effects to this sort of chemical dependence, along with the inevitable caffeine crash. Furthermore, dietary choices can lead to exhaustion and energy depletion, particularly if you are eating a high-carb diet packed with simple sugars.

While adding herbs to your daily health regimen may seem foreign to many people, they are surprisingly simple to integrate into your routine and can provide a consistent and reliable source of energy. Some herbs increase metabolic activity in the body, while others boost circulation, but all of the herbs in the list below can deliver a positive boost to energy levels when used regularly. If you want to overcome chronic fatigue or simply shift away from your caffeine dependence, using herbs for energy is an excellent choice.

Many of the following herbs are known as adaptogenic herbs, meaning that they can help the body not only manage different stressors but actually drive adaptation within the body. This helps the body recognize familiar stressors in the future and respond in a more efficient way, naturally helping people overcome periods of exhaustion of fatigue. 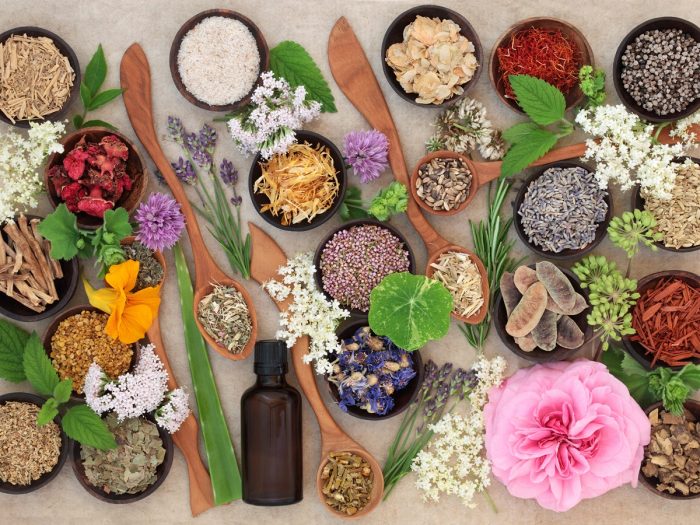 Fresh and dried flowers have been used for their medicinal properties since ancient times. Photo Credit: Shutterstock

As an adaptogenic substance, suma root has the ability to modify the body’s response to external stressors. More importantly, it is linked to boosting energy levels and improving the efficiency of the metabolism. It can also stimulate the production of testosterone, which provides a great energy boost in men. Suma root is primarily consumed in the form of a capsule or tablet supplement, although dried and powdered varieties are also available, specifically in South America.

Knows as one of the best herbs for energy, this adaptogenic addition to your health regimen affects energy levels in a number of ways. Astragalus can help to improve circulation within the body, while also boosting energy metabolism on a cellular level. For thousands of years, astragalus has been used in Chinese tradition to stimulate the detoxifying and metabolic processes of the body. It is most commonly consumed in the form of an extract, which comes in a capsule and tablet form. Brewing an energizing tea from astragalus powder is also popular in many parts of the world.

This sacred herb has always been praised as a booster for the adrenal gland in the body, which is closely linked to neurotransmitter levels. The stimulating properties of this adaptogenic herb can also drive metabolic improvement, which energizes the entire system. Holy basil can be brewed into an herbal tea, but you can also benefit from an extract of holy basil, which can provide a rapid burst of energy.

Famed in certain South America countries, and commonly consumed throughout the day for a consistently elevated energy level, yerba mate behaves similarly to caffeine, without the unwanted side effects. There is a similar stimulant in yerba mate to coffee, named xanthine, which delivers a pure boost of energy. Yerba mate is commonly used to prepare a tea, and this is the simplest and most effective way to enjoy its benefits.

The adaptogenic properties of this herb help it not only improve the functioning of the adrenal gland but also optimize hormone production and use in the body. Furthermore, thanks to the anti-inflammatory and antioxidant properties of ashwagandha, it is able to prevent fatigue and sluggishness, while also improving muscle function and endurance. If you are feeling mentally exhausted, ashwagandha is also well-known to stimulate the mind and provide a cognitive boost. This herb can be consumed in a powder or tablet form. But traditionally, it is consumed with milk and honey.

Dried reishi mushrooms are often considered an herb when used for medicinal purposes; the high concentration of antioxidants and polyphenolic compounds can help to mimic the effects of other caffeinated beverages. In fact, some people use dried reishi mushrooms to help ease off a caffeine addiction. You can consume reishi mushrooms in a powdered form, but tablets and supplements are also a popular form of this energy-boosting remedy.

This particular nut is quite high in caffeine, but it doesn’t cause the same increase in acidity in the stomach as coffee, which makes it an ideal energy replacement to that popular morning beverage. Kola nut also stimulates circulation in the body and boosts the speed of metabolism, which will not only energize you but also help to burn fat and lose weight! Kola nuts are typically eaten whole, but can also be found in powdered or liquid form when consumed purely for medicinal or energy-boosting purposes.

This herb is derived from green tea leaves, which have lower levels of caffeine than coffee. Presence of very high levels of antioxidants and metabolism-stimulating compounds make the green tea extract even more effective than a cup of tea. You can consume the extract in a supplement form, or mix the powder into juice, hot water or a smoothie.

Rate this article
Average rating 4.2 out of 5.0 based on 13 user(s).
Read This Next:
Popular Articles