Home remedies for the burning of the rectum can offer great relief to patients suffering from this irritating condition. The most effective home remedies for the burning sensations of the rectum include maintaining good hygiene, eating correct diet, use of aloe vera, hot and cold packs, buttermilk, petroleum jelly, and radish. Other natural treatments include the use of myrrh, white oak, flowers of sulfur, petroleum jelly, lemon juice, mint juice, and honey in various forms and combinations.

What is a rectum?

The main cause of this problem is hemorrhoids in the anus. Hemorrhoids, also known as piles, appear when veins in the anus swell to form wide masses that touch the walls of the rectum. This problem is also accompanied by a number of other unpleasant conditions like bleeding, irritation, itching, pain, and inflammation.

According to Ronald W. Raven, F.R.C.S, proctitis i.e. inflammation of the rectum is one of the key causes of the burning sensation. [1]

During pregnancy, one may experience these sensations which also go away once the pregnancy period is over.

Diarrhea and constipation can be responsible for the development of these unpleasant masses, as well as excessive or aggressive wiping of the rectal area after bowel movements.

This leads to inflammation of veins of the anus thus causing the unwanted problem.

Excess intake of spicy and fatty foods is also associated with the burning of the rectum, indigestion, discomfort, diarrhea, and vomiting. High intakes of fatty meals can lead to constipation which can further worsen the problem.

These products can also cause burning sensations, especially when consumed in excess.

The most common symptoms of the burning of rectum include:

The good news is that there are many treatments for burning sensations in the rectum that are recommended by the experts, which can save you a visit to the medical expert. However, if an advanced stage of piles has already been reached, you should definitely consult a doctor, and ask him or her about the possibility of using a more aggressive modern treatment in conjunction with some of the traditional, home remedies that have been used for hundreds of years.

Here are some important home remedies which are useful in treating burning sensations in the rectum and other signs of hemorrhoids.

You can dry mango seeds and crush them to make a powder. Patients suffering from burning sensations in their rectum should consume 2 grams of this powder with honey twice a day. This is an effective and common home-based solution for hemorrhoids that have been used for hundreds of years. It works primarily because mangoes have natural anti-inflammatory components in the seeds which become functional when they are crushed. [3]

Coriander seeds are also considered to be effective remedies for piles and various signs and symptoms associated with it. You should soak some coriander seeds in water before sleeping at night and then consume the solution in the morning. Uncomfortable conditions like burning and bleeding of the rectum can be easily treated with this remedy. A study led by Dr. Denys J. Charles suggests that coriander has a wide variety of health benefits, and its anti-inflammatory, antioxidant, stomachic, and spasmolytic properties make it a useful defense against piles and rectal burning. [4]

Bayberry has been shown to reduce the size and severity of hemorrhoids, while the other ingredients are all associated with anti-inflammatory or anesthetic/numbing effects. You can prepare a mixture of bayberry, myrrh, white oak, and goldenseal root and use it as an ointment for relieving the pain and burning caused by piles in the rectum. Together, this mixture is ideal for solving your uncomfortable condition. 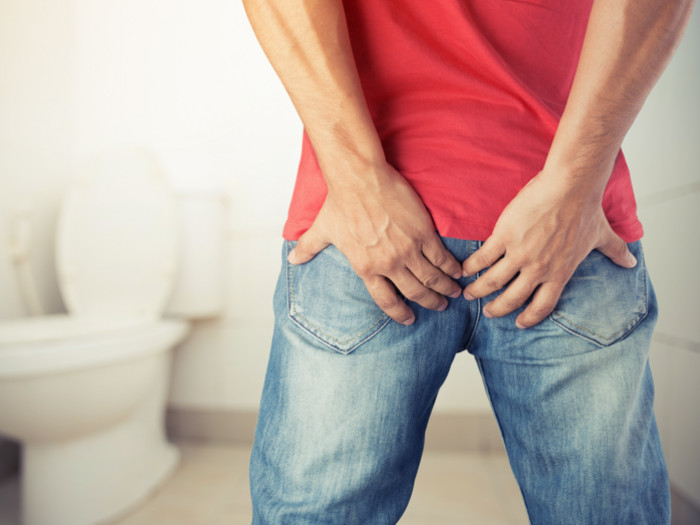 Over time, constipation and other conditions can cause hemorrhoids, which are inflamed veins on your anus or rectum. Photo Credit: Shutterstock

It has been found that consuming mashed banana with a cup of boiled milk can reduce the burning sensation in the rectum. Potassium is a major component of bananas, and it has been widely studied as a vasodilator, which means that it relaxes blood vessels, leading to less stress and pressure on the veins around the rectum Also, potassium acts as an astringent, which shrinks or tightens body tissues, including the tissue that becomes inflamed during rectal irritation. This boost in potassium has a wealth of health benefits, but its powerful activities in terms of hemorrhoids and rectal burning are certainly some of the best! [5]

Interestingly, banana has both soluble and insoluble fiber content of which soluble fiber dissolves in water and slows digestion. Insoluble fiber promotes the movement of material through your digestive system and increases stool bulk, so it can be of benefit to those who struggle with constipation or irregular stools.

You can blend 1 spoon of cranberries and put them inside the cheesecloth. Patients suffering from hemorrhoids can keep this cheesecloth in the rectum and this can relieve the burning sensations and pain caused by piles. Cranberries are vulnerary fruits and known to be anti-inflammatory in nature. They are also prescribed for serious intestinal and stomach disorders because they are effective. [6]

Use of figs is amongst the most commonly recommended home remedies for burning sensations in the rectum.

When you do both of these things together, internally and externally, the results show much faster.

As a part of a healthy, high-fiber diet, probiotics can help you ease constipation. And in this way, they may be able to help ease your hemorrhoid pain. Buttermilk has the ability to reduce the temperature of the body and produce a cooling effect. You should consume buttermilk regularly to get rid of the burning sensation felt inside the rectum.

Lemon juice acts as an anti-inflammatory agent that reduces swelling and irritation while adding mint juice provides a natural soothing and anesthetic effect to relieve the itching and burning sensation.

Use of hot and cold packs is a great way to deal with the pain and discomfort of hemorrhoids quickly! [8]

The alternation of hot and cold is similar to what people suggest after an injury where the spot is swollen or inflamed. The temperature variations usually result in a decrease in swelling as well as enhanced blood flow to the area for healing and cell repair.

Radishes are rich in fiber, which regulates the bowel movements, stimulates peristaltic motion and secretes digestive juices. This eases the passage of bowel movements, which helps to reduce further exacerbation of your hemorrhoids.

Radishes are an emmenagogue (are herbs which stimulate blood flow in the pelvic area and uterus), as well as anti-inflammatory agents used for a variety of health conditions. [10]

Aloe Vera has been known for its many medicinal properties for centuries. In case of piles and burning sensation in the rectum, you can apply it to the anus externally to reduce the burning sensation.

It also has natural soothing and anti-inflammatory qualities which is why it is so often used for sunburn and other inflammation. [11]

Most of these home remedies can be combined with mainstream treatments, but you should consult your doctor first if you think the problem is getting serious.