The health benefits of cumin include its ability to aid in digestion, improve immunity, and treat skin disorders. It also helps treat anemia and prevent cancer. Cumin is also known to relieve respiratory disorders such as asthma and bronchitis.

Cumin is a well-known spice made from the seeds of the cumin plant called Cuminucum cyminum and it belongs to the Apiaceae family. Cumin seeds are extensively used in culinary practices in India and other Asian, African, and Latin American countries. Both whole and ground cumin is used as a staple in various dishes, as it has a distinctly warm and earthy flavor. Because of its strong aroma, only a small amount of cumin essential oil is used in recipes; this is enough to provide them with a powerful punch. Both cumin and its essential oil boast a number of important nutrients that can help keep you healthy.

Cumin is a good source of iron, manganese, magnesium, calcium, and phosphorus. Other vitamins present in it include thiamine, riboflavin, niacin, vitamin A, C, E, K, and vitamin B6. According to the USDA National Nutrient Database, it contains minerals such as copper, zinc, and potassium. It is very low in saturated fats, sodium, and cholesterol.

Let us look at some of the most important benefits of cumin in detail.

Cumin has been found to be beneficial for alleviating digestive problems. It is also a carminative, which means that it relieves you from gas troubles. Due to its essential oils, magnesium, and sodium content, it promotes digestion and also gives relief from stomachaches when taken with hot water.

The very aroma of cumin – which comes from an organic compound called cumin aldehyde, the main component of its essential oil – activates the salivary glands in the mouth, which facilitate the primary digestion of food. Next is thymol, a compound present in cumin, which stimulates the glands that secrete acids, bile, and enzymes responsible for the complete digestion of the food in the stomach and intestines.

Traditionally, it has been used as a potent antidiarrhoeal agent. It helps in giving relief from severe diarrhea. 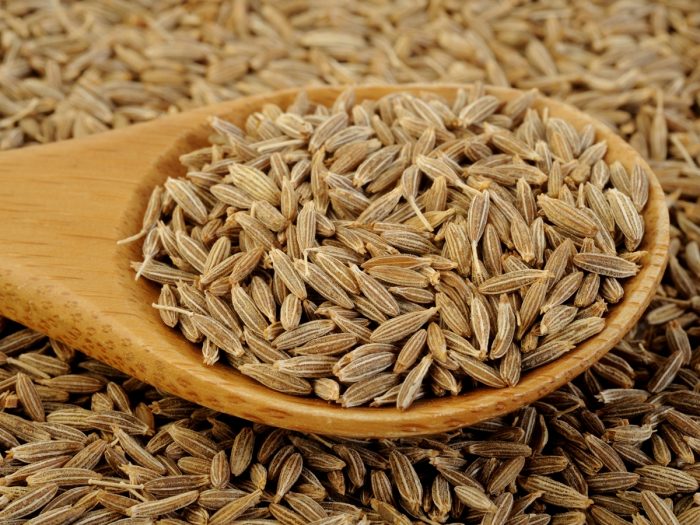 Cumin is a good source of iron, a mineral that helps in increasing hemoglobin levels, improving blood flow and also promoting a healthy menstrual cycle.

Iron-rich cumin can be a nutritious addition to the daily diet for those with anemia. It may help relieve the symptoms of anemia such as fatigue, anxiety, and cognitive malfunction.

A 2011 study shows that taking cumin orally can help in strengthening your immune system.

Furthermore, key nutrients in cumin including iron, essential oils, vitamin C, and vitamin A boost our immune system in a number of ways. Vitamin C is one of the most powerful antioxidants that stimulate the function and activity of white blood cells. It further helps neutralize free radicals that lead to many diseases, including cardiovascular diseases and cancer.

The presence of caffeine (a stimulating agent), and the richly aromatic essential oils (the disinfectants) make cumin an ideal anti-congestive combination for respiratory disorders such as asthma and bronchitis. It can act as an expectorant, meaning that it loosens up the accumulated phlegm and mucus in the respiratory tracts, and making it easier to eliminate them from the system via sneezing or coughing up and spitting. By eliminating as much mucus and phlegm as possible, it can inhibit the formation of additional material and help heal the initial condition that led to its formation in the first place.

Cumin helps in protecting your skin against fungal and microbial infections due to its disinfectant and antifungal properties. It also aids in reducing signs of premature aging like wrinkles, age spots, and sagging skin. This effect is due to the presence of vitamin E which acts as an antioxidant and combats the free radicals.

Reduces the Risk of Diabetes

It aids in diabetes prevention by reducing the chances of hypoglycemia. A report published in Pharmacological Research revealed cumin seeds may help in preventing diabetes. The study which utilized a population of diabetic rats, orally administered a set dosage of cumin seeds for six weeks, during which they were monitored closely. The consumption of cumin resulted in a significant reduction in blood glucose and decrease glucosuria, which is a condition where the urine contains too much glucose, also resulting in hypoglycemia and diabetes. Studies such as this have positive implications for the usage of this seed on the reduction of glucose in human populations.

An article published by The University of Chicago Press suggests that spices like cumin help cleanse foods of pathogens. This helps to improve your health and longevity.

The antiviral and antibacterial properties of cumin help fight infections and foodborne illnesses; it also acts as a disinfectant. The components carvacrol and thymol are responsible for this particular health benefit of cumin.

Cumin has hypolipidemic properties, which helps to control high levels of cholesterol in the body. One more study published in 2016 by Iranian researchers suggests that cumin can help in regulating the total cholesterol levels and body weight. The results can be achieved after using cumin and lime together for about 2 months.

Cumin powder mixed with yogurt is also an interesting way to reap its benefits. 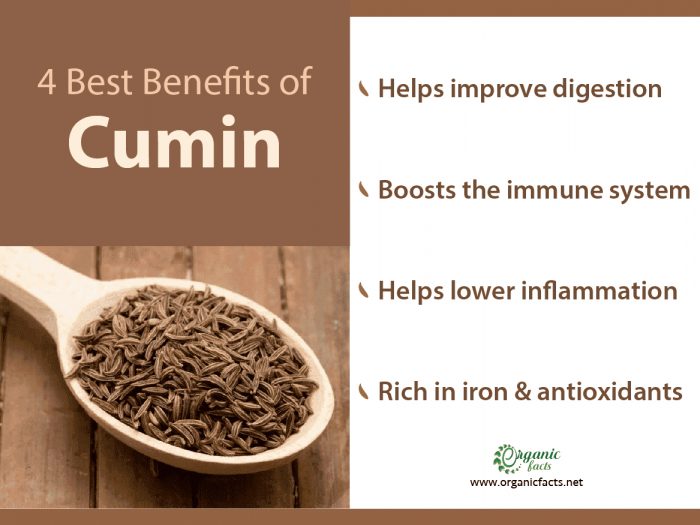 Cumin is a well-known spice made from the seeds of the cumin plant called Cuminucum cyminum and it belongs to the Apiaceae family.

Cumin is known for its antioxidant, chemopreventive, and anti-carcinogenic properties. Therefore it is thought to guard against various cancer, especially colon and breast cancer.

Other research by Khadar states that thymoquinone present in its seeds exhibits antitumor, anticancer, antioxidant and anti-inflammatory effects.

The essential oils present in cumin help fight viral infections, which are often the cause of the common colds. It also suppresses the development of coughing, since it dries up the excess mucus. Further, the high content of iron and vitamin C helps to strengthen the immune system and keeps infections from forming or becoming worse.

Cumin extracts have been shown to contain anti-inflammatory properties that help in relieving pain and inflammation associated with arthritis.

As cumin is rich in iron, it is beneficial for lactating mothers or pregnant women, as well as for women who are undergoing menses. Moreover, it is said to help ease and increase the secretion of milk in lactating women due to the presence of thymol.

Cumin has a remarkable amount of calcium, which accounts for a huge percentage of our daily requirement of calcium. Calcium is an important constituent of milk and hence it is very good for lactating mothers.

A study published in Pharmaceutical Biology provided scientific support for cumin extract’s anti-stress, antioxidant, and memory-enhancing properties. Furthermore, it promotes the use of cumin as an important culinary spice in foods given preliminary research on its role in fighting stress and related disorders.

It is highly effective in improving symptoms of irritable bowel syndrome (IBS) such as cramps, nausea, bloating, gas, and digestive spasms. Researchers at the Tehran University of Medical Sciences published a report in the Middle East Journal of Digestive Diseases (MEJDD) stating that cumin extract; is a type of herbal remedy effectively used in treating gastrointestinal disorders like bloating and other symptoms of IBS.

The compounds present in cumin may assist in the reduction of the addictive behavior and withdrawal symptoms of opioid narcotics. However, more research is needed to determine the generalizability and reach of these findings.

Preliminary studies performed on animals show scientific support for cumin as providing antistress, antioxidant, and memory-enhancing activities. So, there is a science behind using it as part of your daily dishes to help fight stress and related disorders.

Cumin is also thought to have beneficial properties in the treatment of renal colic, weak memory, insect bites, and painful stings.

How to Use Cumin?

Given its distinctive flavor and fragrance, cumin as seeds, ground cumin, or cumin oil, is used in various ways, including;

Excess intake of cumin may result in severe side effects such as:

Some other minor side effects may include: