In your local grocery store, pear juice may not be your most preferred fruit juice you look for to give your body a nutritious boost, but it is surprisingly dense in nutrients and active ingredients that can have a significant impact on your health.

What is Pear Juice?

Pear juice, as the name implies, is derived from the pear plant, which can be a shrub or a tree and belongs to the Pyrus genus. Native to North Africa and parts of Europe, there are now hundreds of different cultivars of pears grown around the world, although not all of the fruits of these plants are edible. The most common pear variety in the European region is Pyrus communis, while China and other parts of Asia tend to favor Pyrus pyrifolia.

Pear juice is made by juicing the fruit and removing as much of the juice as possible, without mixing in the fibrous material. While this does make for a less filling treat, while still delivering a huge concentration of nutrients and antioxidants, you are losing out on the dietary fiber you would get by eating a full pear fruit. That being said, pear juice can provide 2-3 pears worth of vitamins and minerals in a single serving, so sacrificing the fiber might not be a terrible idea. Pear juice is packed with vitamins, minerals and powerful components including vitamin C, potassium, copper, vitamin K, various B vitamins, anthocyanins, flavonols, phosphorus, magnesium, calcium, and iron, as well as various other polyphenolic compounds and antioxidants. [1] 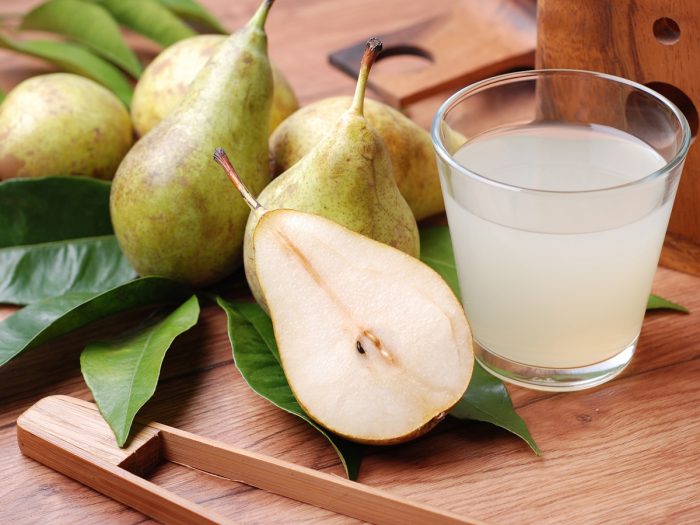 Pear juice can be added to mojitos for a healthy boost. Photo Credit: Shutterstock

Significant potassium levels mean that this fruit juice can protect your heart health by lowering blood pressure. Hypertension affects tens of millions of people around the world, but the vasodilating quality of potassium relieves strain on the blood vessels and arteries, which lowers your risk of cardiovascular problems.

A lack of iron in the body can cause weakness, cognitive slowness, fatigue and stomach upset. These symptoms of anemia can be avoided with pear juice, considering it has a measurable level of iron that can help boost red blood cell production in the body. [3]

Pear juice contains a number of different minerals including calcium, phosphorus, magnesium and iron, all of which play a role in boosting bone mineral density in the body. Regular consumption of this mineral-rich juice can help you prevent the onset of osteoporosis and keep you strong as you age. [4]

Copper is a mineral that is often overlooked by nutritionists but it is closely connected to nervous system function, which means that a steady stream of copper will help the communication network in your body work more efficiently. [5]

In moderate amounts, pear juice can help reduce inflammation in the tissues, joints and muscles. This juice is a popular drink for before as well as post their workout, as it helps to relax the muscles and promote repair. [6]

Vitamin C is enough to stimulate the immune system, but with no less than a dozen different antioxidant compounds, pear juice goes far beyond that. Rich in flavonols, catechins, epicatechins, beta-carotene, quercetin, vitamin C and various other active ingredients, the components of pear juice can quickly seek out and neutralize free radicals before they can cause mutation. This juice is able to support the immune system by reducing stress and inflammation throughout the body and helping to prevent chronic disease. [7] [8]

This fruit juice is known to cleanse the colon and reduce inflammation, while also improving the bacterial balance in the gut and eliminating symptoms of constipation, high acidity, bloating or diarrhea. This will help your overall nutrient uptake efficiency over time. [9]

Vitamin K is another nutrient that is commonly ignored but it is an important clotting agent in the body. If you are deficient in vitamin K, which is found in pear juice, your body will struggle to heal its wounds, and you will be more at risk for bloody noses, hemorrhoids, heavy menstruation or bleeding gums, among others. [10]

How to Make Pear Juice?

Pear juice is actually quite simple to make, requiring only a juicer or blender, a few pears, and other possible ingredients if you want to make your juice stand out a bit more. The taste of pears is quite mild, which makes it an ideal fruit juice to pair with other flavors including apples, oranges, celery, mint or lemon. So, let us take a look at the easy recipe below.

One of the most common uses of pear juice is in the treatment of constipation. It is important to note that juicing a pear does eliminate the majority of the dietary fiber in the fruit, which would normally help to stimulate digestion and relieve symptoms of constipation. However, pear juice also contains sorbitol, a sugar alcohol that is found in a few other fruit juices, such as apples, nectarines and plums.

Sorbitol is not broken down in the small intestine and causes water to be retained during the digestive process. This can loosen stool and lubricate the intestinal tracts, helping to stimulate peristaltic motion and relieve constipation. In large amounts or for people with sensitive stomachs/IBS, sorbitol can cause diarrhea and gastric distress but pear juice has been recommended for constipation for generations. [13]

Side Effects of Pear Juice

Most of the impact that pear juice has on the body is positive, but there are some potential side effects including diarrhea, bloating, cramping, gas, liver problems and certain inflammatory conditions, such as gout.

Rate this article
Average rating 4.2 out of 5.0 based on 79 user(s).
Read This Next:
Popular Articles