Home remedies for treating tinnitus include consumption of a multi-nutrient rich diet with low sodium content, relaxation techniques such as yoga, acupuncture, and usage of ear plugs or ear muffs. Herbs such as cornel dogwood, bayberry bark, burdock root, black cohosh, privet, hawthorn leaf, and ginkgo may prove helpful in relieving tinnitus, attributing to their special qualities that may heal the underlying conditions disguised within. 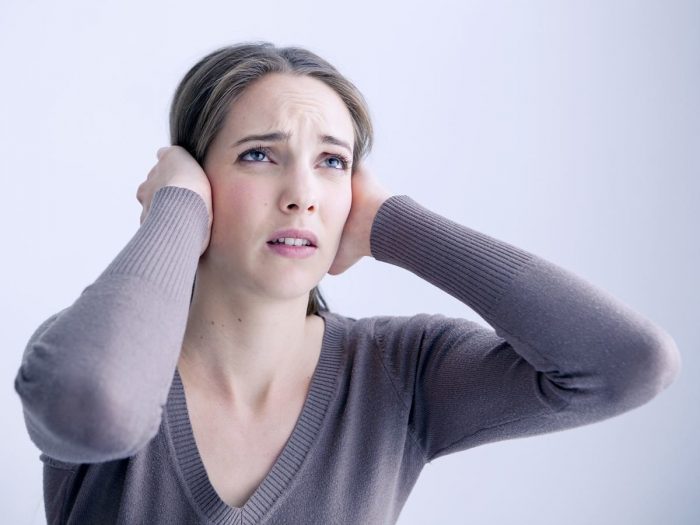 Tinnitus is the perception of noise or ringing in the ears which affects about 15 to 20 percent of people. Photo Credit: Shutterstock

Tinnitus is a condition characterized by the perception of noise or ringing in the ears when no external sound is present. This sound may be heard as a humming, buzzing, whistling or hissing. It may be periodical or persistent, low-pitched or high-pitched. Tinnitus is a sign of an underlying condition that needs attention and not a disease in itself. While the condition looks like it is associated with the ear its real reason is in the brain cells. [1]

Home Remedies and Treatments for Tinnitus

Home remedies that may bring therapeutic relief from tinnitus are as follows:

Consumption of a balanced diet rich in nutrients particularly vitamin A, beta-carotene, vitamin B12, vitamin C, vitamin E, magnesium, copper, and selenium may contribute towards the betterment of tinnitus. [2]

Consumption of lesser amount of sodium may help improve the condition of tinnitus especially in the individuals suffering from Meniere’s disease which is characterized by the retention of extreme amounts of fluid in the ear leading to dizziness, hearing loss, and a filled feeling in the ear. People with such a condition should opt for a low-sodium variety of salt and generally control their daily dietary sodium intake. In case you experience a feeling of fullness in the ear associated with tinnitus, medical professionals generally recommend consuming adequate calcium and potassium rich diet.     [4] [5]

Using earplugs may prove helpful during the condition of tinnitus. Wearing earplugs in noise prone areas like construction sites, noisy industries, roads or any other regions with disturbing ear-splitting sounds may reduce the volume to a great extent and yet allow you to hear the voice clearly. Earplugs are readily available at audiology clinics, music stores, and pharmacies. Foam-filled earmuffs that firmly seal the ear are another comforting option for defending the disturbing sounds in case you don’t buy the idea of earplugs. [6]

Acupuncture is an ancient approach which comes as a rescue to a number of ailments such as tinnitus and is in fact advocated for its efficacy by various scientific researchers as well. Sticking acupuncture needles in the body areas that are most liable to alleviate tinnitus may help provide relief from tinnitus to a great extent. Once learned and trained from a professional, acupuncture may prove an effective home remedy for curing tinnitus. [7]

Medications such as aspirin may lead to the ringing in the ear associated with tinnitus. Excessive intentional or inadvertent ingestion of such medicines may affect the auditory cells in the inner ear and lead to the sound sensation. In fact, some people who take such medication on a regular basis should talk to the doctor and be aware of its side effects. Just in case you are already experiencing ringing in the ear sensation, inform your doctor before changing or starting any new medications. [8] [9]

Interestingly, music in itself may prove as a healer in tinnitus. Listening to calming soft music especially the melody of nature, such as sounds of running water, and other nature generated jingling may help relieve tinnitus. Other than that, self-humming for a few seconds, especially when you are in the vicinity of loud noise, is also considered effective in tinnitus, attributing to the ability of this technique to activate a particular muscle in the inner ear which constricts the little bones jointly and avert some of the noisy waves to get through and aids in shielding the ears from continuous exposure to the loud noise. [10]

Another home remedy for tinnitus which comes handy in the kitchen is garlic. Antioxidant properties of garlic help in relieving the ringing sensation associated with tinnitus. Blend about six cloves of garlic with a cup of almond or olive oil till it is nicely mixed and minced. Let the mixture steep and keep it for about a week. Sieve the liquid and apply a few drops in the ear. This may soothe the ringing feeling in the ear and promote the hearing. [11]

Blend a spoon of clean turpentine with an equal amount of almond or olive oil and place a cotton ball squeezed in that mixture in your ear overnight. This would help alleviate the noisy sensation in the ear. [12]

Relaxation technique like yoga and deep breathing may help the body in combating tinnitus. Regular exercise and relaxation regime help in improving the blood circulation and also decreases the stress factor that may accentuate the problem of tinnitus. [13]

Excessive intake of caffeine, alcohol, and smoking habits may worsen the problem of tinnitus. Nicotine present in such items obstructs the blood flow to the ear structures. So, gradually cutting down on such triggers may prove useful in tinnitus.

Using a pillow filled with warm salt helps alleviate the symptoms of tinnitus. Fill a cotton fabric bag with fairly warm stir-fried salt. Lie down on the pillow resting both the ears on the salt bag alternately. Doing this and reheating the salt when cooled several times may bring relief in improving the condition of tinnitus. [14]

Using powdered mustard may also bring relief in soothing the sensation of tinnitus. Finely powdered mustard wrapped in a cotton ball can be inserted in the ear before sleeping and should be removed in the morning. Repeat this for three days and it may help relieve the sound sensation associated with tinnitus. Make sure the cotton does not have any leakage point and avoid this remedy for young children. [15]

Take some walnuts and soak them in salt water for 30 minutes and let them dry. Stir-fry them on low heat till they are crispy and crunchy. Eat about half an ounce of walnuts every morning and this may prove beneficial against tinnitus. [16]

Ginger is a wonder food that aids in healing a range of ailments including tinnitus. Healing qualities of the ginger attribute to its ability in stimulating the circulation of blood, fight pathogens and exert antioxidative defense towards oxygen free radicals. It also aids in relieving nausea associated with tinnitus. [17]

Alternating hot and cold foot baths may help alleviate the symptoms of tinnitus attributing to the dilation of blood vessels that may result from such exercise. This stimulates the blood flow towards the head and helps treat tinnitus. [18]

The usage of herbs such as cornel, bayberry bark, burdock root, black cohosh, privet, hawthorn leaf, and ginkgo has been trusted for their efficacy in curing tinnitus. [19] [20]

Note: Depending on the severity, some instances of tinnitus may create an annoying experience and significantly influence the quality of life of an individual attributing to the added burden of internal sounds cropping up in the head and may also be the cause of psychological distress in some people.

Word of Caution: Natural caution and a piece of advice from a medical professional with a detailed expression of existing symptoms are always recommended before considering any home treatment or self-help approach to tinnitus.

Rate this article
Average rating 3.9 out of 5.0 based on 93 user(s).
Read This Next:
Popular Articles