What Is Ube And Why You should Try It

When the Manila Social Club in Brooklyn started offering their Golden Cristal Ube Donut, little did they know that it would spark an Instagram rage. It wasn’t the champagne jelly or even the 24K gold that caught people’s attention. Instead, it was ube, a humble yam. With its vivid purple color, it was included as a mousse in this decadent dessert and just like that, a star was born.

Who doesn’t love an ooze of purple in their doughnut or a purple swirl of ice-cream in their cone? It’s easy to see why ube or purple yam with its almost psychedelic color was getting billed as the next culinary find. What can be whackier than a dash of this vivid color to brighten up your day? But is it as good as it looks or is it a flash in the pan, another two-second star in our never-ending search for the next sensation? Fortunately, ube seems here to stay for its visual appeal, its unique flavor, and its health benefits. 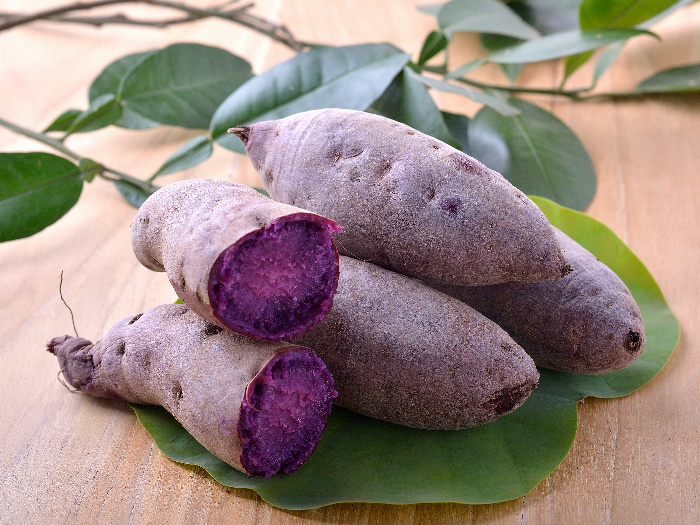 Scientifically known as Dioscorea alata, ube is a species of yam. While it may have suddenly made news in the West, thanks to social media, it is not new in many parts of the world. In fact, it is the staple in many Austronesian cultures, such as New Guinea and the Philippines. Much of its appeal in the West seems to come from the Filipino tradition of using the purple yam in desserts. In fact, we are also using the Filipino name for this tuber, pronounced as ‘ooh-bae’.

For the social media generation, its popularity is without a doubt because of the vivid color. But ube’s endurance on the culinary scene will remain because of its unique flavor. Although it is often compared to a sweet potato or taro, it is less savory. In fact, ube’s unique taste is a combination of everything you want in a dessert. It has a hint of vanilla, a nutty edge with a sweet flavor. The flavors are quite gentle and lend themselves perfectly to mellow dessert recipes.

The best part about ube is the benefits it brings to your health. It is nutritious, shows antioxidant potential, and can improve your gut health.

Ube is rich in protein and a good source of carbs and dietary fiber. The average protein content in ube is 6 percent, sugar is 5.7 percent, starch content ranges between 39.9 to 84.9 percent, dietary fiber at 6.8 percent, and ash content (which indicates mineral content) is at 3.5 percent. Some purple yams have high dietary fiber content, as much as 11 percent, which is comparable to cereals like brown rice. It also contained a sizable amount of phosphorus, potassium, calcium, zinc, copper, and manganese. [1]

A number of studies have shown the antioxidant potential of ube. As this 2017 review published in Frontiers in Pharmacology found, this is due to the polyphenol content in the yam. It shows hypoglycaemic, antimicrobial, anti-fungal, anti-mutagenic, and immunomodulatory properties. In Nigeria, it is often used in folk medicine for its antimicrobial properties. [2]

Purple yam is part of folk medicine for its medicinal properties, especially in improving gut health. The starch in the yam has a prebiotic effect. It helps in lipid metabolism and gut microbiota modulation. [3]

Eating ube dessert may also improve your immunity. It contains a nutrient known as saponin steroid. A 2018 research shows that it has strong potential in improving immunity. [4]

Thanks to the plant-based movement, ube has emerged as one of the most favored foods, especially when it comes to desserts. It is often used in place of dairy-based creams and mousses. One search of the trending #ube on Instagram and you will see why it is so popular. Purple yam desserts are as eye-catching as they are delicious. The ube products you can find today come from traditional Filipino cuisine as well as modern experiments.