In the battle of almond butter vs peanut butter, there are many arguments for both sides, including taste, nutrients, and ultimate health benefits. Before you buy any, it is important to understand how these two popular kinds of nut butter differ, and what effects each can have on your health.

Plant-based butters have emerged as healthy alternatives to dairy butter as they make for a tasty spread. But now that there are so many forms of nut butters, the curiosity or obligation, maybe if someone is allergic to peanuts, is giving a huge rise to a comparison between the two beloved spreads – almond butter and peanut butter.

Although almond butter and peanut butter share quite a bit in terms of flavor and nutrient profile, there are some clear differences that should be addressed. So let’s check out the characteristics of both and see which one wins the game! 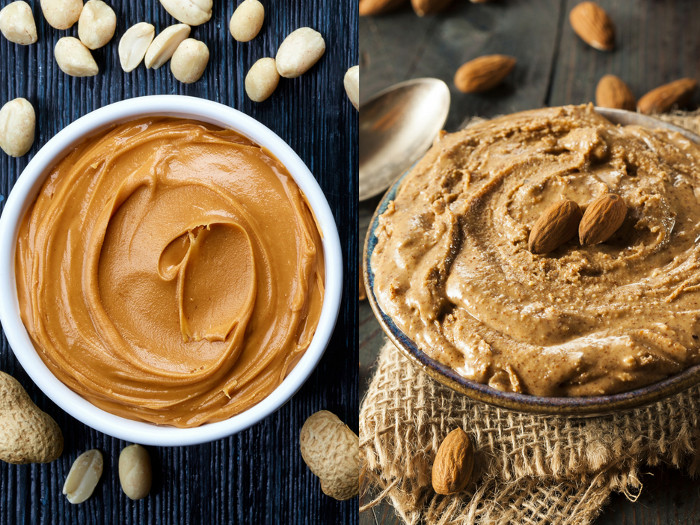 Almond butter is healthier than peanut butter as it has more vitamins, minerals & fiber.Photo Credit: Shutterstock

According to the USDA, one tablespoon of almond butter i.e. 16 g, contains the following nutrients:

According to the USDA, one tablespoon of peanut butter i.e. 16 g, contains the following nutrients:

Aside from these, peanut butter has an impressive mineral profile. It contains calcium, iron, magnesium, phosphorus, potassium, zinc, copper and sodium. You will also find vitamins like thiamin, riboflavin, niacin, folate, and choline.

It has a rich, nutty flavor just like almonds. Although the flavor of almond butter is more polarizing than peanut butter.

Peanut butter comes in creamy and crunchy variants and has a sweeter profile than almond butter. Many say that peanut butter also resembles the taste of Cracker Jacks.

This sweet alternative to peanut butter has rapidly grown in popularity in recent years, both due to its pleasant flavor and its rather obvious health advantages over peanut butter. Almond butter is made in a similar way to peanut butter, following the process of shelling, roasting, blanching, and then blending in a food processor, which results in the creation of creamy nut butter. You can slather it on your bread or just have it with a spoon.

This surely isn’t a zero-sum game as each of these nut butters have certain advantages over the other. So take a spoonful of whichever you like and enjoy!

How To Make Poached Pears

Poached pears are served with a spice-infused syrup, giving it both character and flavor. We've added customization and serving suggestions for this classic fruit dessert.

15 Types Of Honey & How To Enjoy Them

Maple syrup and honey are popular alternatives to sugar, but certainly not limited to that. Both these sweet, sticky syrups hold their own and are used in various recipes.