Baking powder is practically a staple in our pantry, the magic ingredient that makes bread, cakes, and pancakes so soft and fluffy. Yet there are times we may not be able to get hold of this essential ingredient or we may have to bake for someone with food allergies. In such cases, it’s always good to have some handy baking powder substitutes ready.

Before looking for substitutes, let’s first understand what baking powder is. It is a leavening agent that is used to give a lift to baked goods. It is made by mixing sodium bicarbonate (baking soda), which is a base, and an acid. When mixed with a liquid, it releases carbon dioxide bubbles, which is the reason for the rise you see in baked goods. For a substitute to be effective, we need the same leavening action.

A fermented dairy product, buttermilk has a sour, tangy taste which is delicious on its own. Most buttermilk available today is cultured, meaning that it was produced by adding beneficial bacteria. In a study published in 2017 in the International Journal of Food Science, researchers added buttermilk at varying amounts to pan and pita bread preparations. They found that when added at 30% of the liquid volume, buttermilk improved the bread’s physical properties. [1]

To make things easy, several traditional recipes use buttermilk for cookies, pancakes, and cakes. When added to a rich chocolate cake batter, the sourness of buttermilk brings balance to the richness of cocoa and chocolate, giving the cake an added depth. To substitute for 1 tsp baking powder, add 1/2 a cup buttermilk with 1/4 tsp baking soda to the batter. But do make sure that you reduce other ingredients by 1/2 a cup to maintain the proportions. 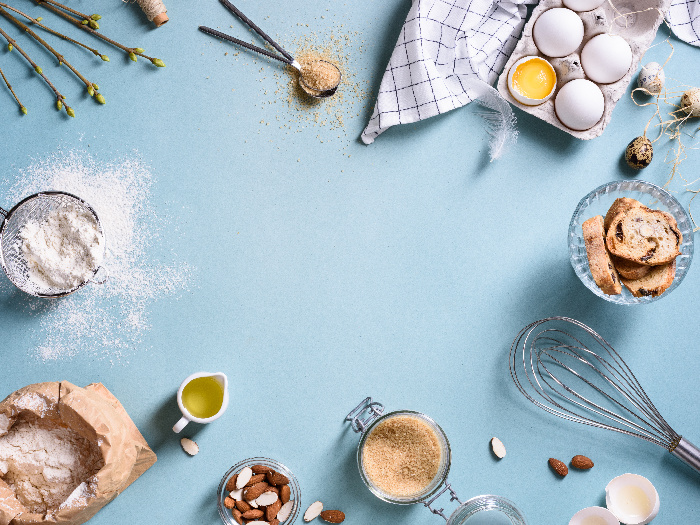 Lemon provides the acidity required of a leavening agent. However, it has a strong flavor. It is advisable only in recipes which call for a small amount of baking powder. Adding too much lemon juice will give your recipe a strong lemony flavor. You can use 1/4 tsp lemon juice with 1/2 teaspoon baking soda in place of 1 scant tsp baking powder.

The book Making & Using Vinegar explains how vinegar’s addition in baking is more for its physical properties and not its flavor. The book includes the recipe for ‘whacky cake’, a recipe that originated during the World War II shortages. Similarly, in her book Cakes Regional & Traditional, British chef Julie Duff gives the recipe for vinegar cake, believed to have originated in wartime Britain. Originating in Norfolk, the vinegar cake is eggless and relies on vinegar as a raising agent. [2] [3]

Every baker understands the role of eggs as a raising agent in baking. The American Egg Board recommends two ways of using eggs for leavening: using the white and yolk or using whipped egg whites. The liquid yolk and white, lightly beaten, converts into steam which acts as the leavening factor. Egg whites are more potent in this case. The egg whites trap air cells when whipped and this is eventually filled by steam. [4]

The ability of the egg as a rising agent is evident in preparations like soufflés or meringues where the whipped egg white is all that holds the structure. The angel food cake is a more complex recipe where the egg white is the raising agent. Sometimes a stabilizing agent like the cream of tartar can be added to stabilize the egg white.

Self-raising flour is a mix of all-purpose flour, baking powder, and salt. The reason it can act as a substitute is that it already contains baking powder. It’s easy to add because all you need to do is add slightly more than the specified amount of baking powder.

Like buttermilk, yogurt also becomes acidic because of the fermentation process. Lactic acid bacteria that is responsible for the formation of yogurt also helps in the ‘raising’ action when used in baking. The tangy taste of yogurt adds to the flavor of the dish, particularly in scones and cakes. To substitute for baking powder, use 1/2 cup of yogurt with a 1/4 tsp baking soda. However, avoid flavored yogurt as the acidity of these varieties is usually lowered. [5]

Along with buttermilk, sour milk is one of the traditionally used leavening agents. In Housekeeping in Old Virginia sour milk appears frequently for a range of baked goods, including a sour milk cake. Published in 1879, this classic cookbook was compiled with the help of “two hundred and fifty of Virginia’s noted housewives”. However, do ensure that the sour milk is just slightly sour and not very old or rancid. For 1 tsp of baking powder, you will need 1/2 cup sour milk with 1/4 tsp baking soda. [6]

The sweet and treacly molasses are often used as a substitute for sugar. But it can also be used as a raising agent. When mixed with baking soda, molasses assume a leavening property. Use ¼ cup of molasses with ¼ teaspoon of baking soda in place of 1 tsp baking powder.

Since it is made with baking soda, club soda is effective as a baking powder substitute. However, it contains a very small amount of baking soda. So, you will need a lot of club soda. It is usually used as the liquid component in recipes like pancakes.

When you cannot find anything else from the list, yeast may work in a pinch. This is not the substitute which requires a simple adjustment of ingredients. Instead, you may have to look for a completely new recipe that uses yeast for leavening. Fortunately, there are plenty of recipes to choose from. Yeast can be used for basic breadmaking, sourdough starters, or a classic cake-like bread, such as the Hungarian sweet dough or the German stollen.

Research published in 2017 in Comprehensive Reviews in Food Science and Food Safety, found that performance of yeast can vary according to its genetical strain, fermentation conditions, the type of dough and the presence of other elements like salt and sugar. Today we can also get strains of yeast that allow us to work with sweet, lean or frozen dough. According to the book Classic Sourdoughs, Revised: A Home Baker’s Handbook, more than 350 species of yeast exist with countless strains and varieties. [7] [8]