If you eat raw potatoes, it isn’t inherently dangerous, but it is rather uncommon and could present a few potential health risks while offering quite a few benefits.

What are Raw Potatoes?

Quite simply, raw potatoes are potatoes that haven’t been cooked properly, whether that is baking, boiling or some other common means of preparing these popular stem vegetables. Eating vegetables raw is very common around the world, although potatoes aren’t commonly eaten raw. According to USDA National Nutrient Database, raw potatoes are rich sources of dietary fiber, calcium, magnesium, potassium, phosphorus, vitamin C, thiamine, riboflavin, niacin, vitamin B6, folate, and vitamin-B12. [1]

The nutrient composition doesn’t change much between raw and cooked potatoes, and there are some obvious health benefits to eating potatoes in any form. Benefits include:

While it is rather tasty to have cooked potatoes, it is less nutritious compared to the raw ones. Raw potatoes consist of fewer calories and proteins in comparison to when they are baked. However, they are rich in other micro-nutrients such as vitamin C. For the uninitiated, vitamin C is an essential water-soluble nutrient that is an essential antioxidant, which plays an instrumental role in everything right from collagen production to immune function.

Furthermore, you can get the right amount of your dietary fiber intake by eating raw potatoes.

High in fiber and carbohydrates

A report published by a team of researchers from Coimbatore, Tamil Nadu, India, in the Journal of Medicinal Plants Studies states that one large potato with the skin has nearly 9 grams of fiber [4]. 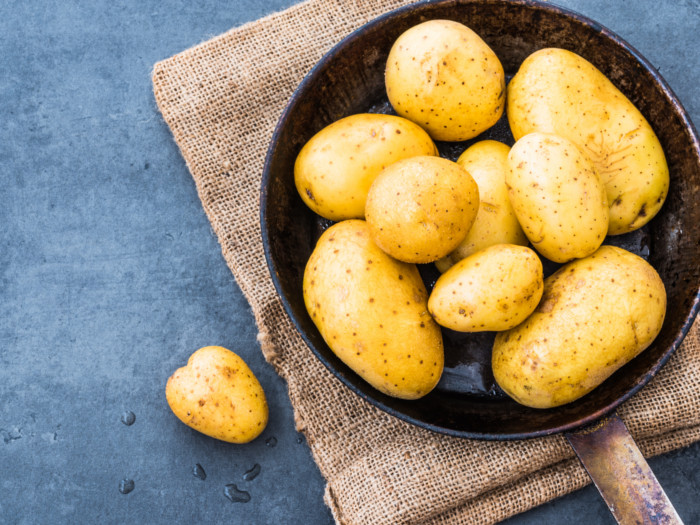 The American Heart Association states that a food item, that has a high soluble fiber content such as raw potatoes can help reduce your levels of LDL or “bad” cholesterol. It is also a rich source of carbohydrates. [5]

A detailed report by Dr. Katherine A. Beals, University of Utah, stated that one large raw potato with skin consists of nearly 58 grams of carbohydrates, whilst being low in fat and calories, that makes it as a must-have food item in your food chart if you wish to lose those extra kilos. The same cannot, however, be said about fried or boiled potatoes. Their starch content is more. [6]

Unfortunately, our bodies are very bad at digesting raw starch, so even if you eat raw potatoes, you may not have access to the full range of nutrients and benefits. Additionally, the skin of the potato, which is often eaten when the vegetable is cooked, can be tough and unappetizing on a raw potato.

A study [7]published by a team of Spanish researchers in the Journal of Nutrition suggested that the root vegetable may also have a positive effect on the entire immune system. The researchers discovered that when growing pigs that fed on large quantities of raw potato starch had a healthier bowel movement. Additionally, they discovered that the pigs who were given raw potato starch had declined levels of white blood cells, such as leucocytes and lymphocytes in their blood. This fall in the regulation of leucocytes, according to the researchers, meant a healthier body.

Several studies and USDA suggests that potatoes are rich in vitamin C. This vitamin is also known for its benefits that range from protecting the body against infections to improving immune system health.  [8]However, more scientific evidence and studies are required to support this claim.

The first thing that usually comes to mind when we think of potatoes is that it’s a fattening food, which should be avoided by the health-conscious folks. However, Dr. Joe Vinson, a professor in the Department of Chemistry at the University of Scranton in Pennsylvania, presented a study at the 242nd National Meeting & Exposition of the American Chemical Society (ACS), in which he indicated that one potato has only 110 calories and dozens of healthful phytochemicals and vitamins, unlike popular belief. [9]

The new study involved 18 patients who were primarily obese with high blood pressure. They were given to eat 6-8 purple potatoes, each almost as big as a golf ball and their blood pressure was monitored. The results of the study suggest that the intake of potatoes led to a decrease in blood pressure without any change in weight. Purple potatoes were used in the study due to the pigment or coloring material in fruits and vegetables, which are important phytochemicals. However, it is important to note here that even though the researchers used purple potatoes in the study, they opined that red-skin potatoes and white potatoes are likely to show the same effects.

Raw potatoes are rich in resistant starch, which is unlike the usual starch that your body absorbs or digests. On the other hand, it is used to supply energy for your helpful gut bacteria. It is necessary that your diet consists of resistant starch for it has a number of health benefits.

According to Dr. Mindy Patterson-Maziarz, et al. raw potatoes help improve insulin sensitivity by lowering blood sugar levels and may result in a significant weight loss, especially in obese people. The researchers found that this resistant starch is transformed into butyrate – a short-chain fatty acid, that can enhance gut and digestive health. Furthermore, it stated that this short-chain fatty acid can reduce and control inflammation in the colon, which may help prevent the growth of colon cancer. [10]

Intake of excess raw potatoes, researchers say, may cause digestive issues such as indigestion, gas, and a feeling of bloating as the semi-undigested potato begins to ferment in the gut. A team of researchers led by Revina TA et al, in their study found that potatoes contain antinutrients such as protein trypsin inhibitor and lectins, that can cause the body difficulty in digesting and absorbing the nutrients. [11]

Furthermore, the researchers indicate that by consuming raw potatoes one is at a higher risk of contracting gastric diseases, which cooking can easily countervail.

Additionally, a study by Dr. Donald J Barceloux, Medical Toxicology, Pomona College in Claremont, California, USA states that the final potential concern is toxicity, since there are some potentially dangerous alkaloid compounds in these vegetables, as they are part of the nightshade family. [12]

Given that starch in spuds are likely to trigger a significant rise in blood sugar levels, it is said that pregnant women, particularly those who are overweight or have a case history of insulin resistance, should avoid potatoes. A group of US researchers discovered a close association between potato consumption before pregnancy and the risk of gestational diabetes mellitus (GDM). This study involved over 21,000 women from the Nurses’ Health Study II (1991-2001) who had no past history of GDM or any other chronic disease. [13]

Potatoes begin to produce chlorophyll, the green pigment that gives plants and algae their color, after being exposed to sunlight. Light skinned potatoes change from yellow-brown to green. While sunlight will help produce chlorophyll, it will also aid in manufacturing a certain compound that will protect the plant from any kind of damage, such as that from insects, fungi, bacteria or hungry animals. However, these compounds can be harmful to the human body when consumed.

According to a study published by Dr. Lachman J, Dr Hamouz, et al, Ceska Zemedelska Univ., Prague-Suchdol (Czech Republic), in the Food and Agriculture Organization of the United Nations Journal, potatoes produce a toxin called as solanine that works by hampering an enzyme that plays a vital role in breaking down certain neurotransmitters. Additionally, the study states that it damages cell membranes and adversely affects the intestine’s ability to absorb food and nutrients. [14]

Within the potato plant, solanine is present in higher levels or in the low levels of the skin and flesh of the root vegetable. While one can measure the amount of solanine in a potato through chlorophyll, it isn’t entirely a perfect parameter for measurement. After, all both solanine and chlorophyll are produced under the same conditions, albeit independently.

Greening of a potato is indicative of the fact that it’s starting to produce more solanine. How quickly a potato turns green, entirely depends on its variety. Dr. Lessa Kay Grunenfelder along with her team of researchers from the Postharvest Physiology and Biochemistry Lab, Department of Horticulture and Landscape Architecture, Washington State University,USA published a report in the Journal of Agricultural and Food Chemistry, which states that a potato may turn green quickly, but may have little to moderate amount of solanine, whereas a potato may green quickly and have high levels of the toxin. [15]

Rate this article
Average rating 3.6 out of 5.0 based on 87 user(s).
Read This Next:
Popular Articles