Applying essential oils for psoriasis is a common and effective remedy for this common conditions, due to the anti-inflammatory, immune-regulating, antioxidant and antiseptic properties of these oils. Psoriasis is an autoimmune disease that consists of the body’s immune system perceiving an attack on the surface of the skin. As a result, rapid new skin cell production occurs, results in inflamed patches of red on the skin, particularly on the joints, such as the elbows and knees. There are multiple types of psoriasis, but the most frequently seen is plaque psoriasis, which grows in small patches and can often be covered in white or silvery plaque buildup. The cause of this autoimmune disease has long been a mystery, but the two most likely explanations are a malfunctioning immune system or a genetic predisposition to this condition. This common skin condition, affecting more than 7 million people in the United States alone, is not contagious in any way.

Psoriasis can appear in waves, and may flare up for weeks or months at a time, before disappearing or going “into remission”. This can make treatment of the condition sporadic and unpredictable, but there are many different salves and steroid creams that can help treat the condition and are widely prescribed. The typical symptoms of psoriasis include patches of dry skin or inflamed red areas that are coated or scaled over with white/silver plaque. The areas are often itchy or painful, and are made worse by scratching. While this can be a lifelong condition, treatment is typically only used during a flare up, and there aren’t any long-term negative effects of this condition. For that reason, using essential oils for psoriasis is highly recommended. [1]

One of the main dangers of psoriasis is the chance for infection, as the hard rashes can often crack and bleed, particularly when they are scratched. Bergamot oil has powerful antiseptic properties that can help ward off infection and defend against additional inflammation or reasons to scratch. [2]

How to Use – Mix bergamot oil with an equal amount of a carrier oil, such as jojoba oil, and then gently apply 3-4 drops to the affected areas at night for an itch-free night and relieved symptoms in the morning.

Famed for its ability to stimulate the growth of new cells and regenerate damaged tissue, this is one of the best essential oils for psoriasis. Aside from its stimulant effects, geranium oil also has anti-inflammatory properties to help eliminate discomfort and itching. [3]

How to Use – When combining geranium oil with other carrier oils or gels, such as aloe vera or coconut oil, you can increase its ability to soothe those inflamed patches of skin and produce the right amount of tissue, rather than an overgrowth. 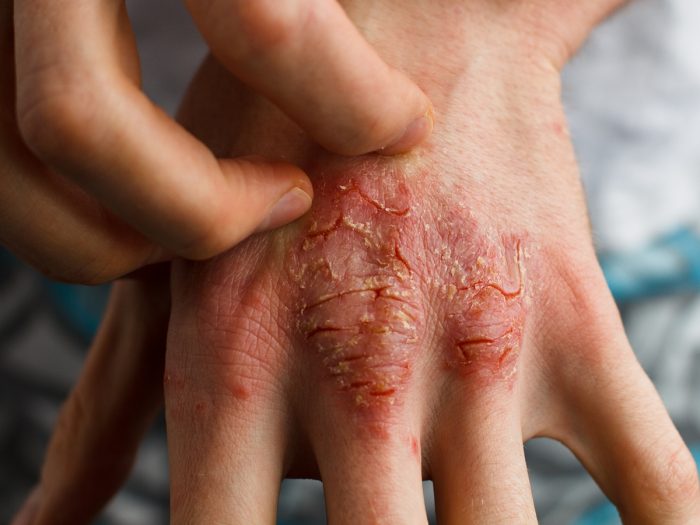 Psoriasis is a common skin condition that speeds up the life cycle of skin cells. Photo Credit: Shutterstock

This essential oil benefits symptoms of psoriasis in two different ways. It can moisturize the skin and seal it to protect against infections and environmental irritants, while also reducing pain and inflammation in the affected area. [4]

How to Use – The most popular use for this oil is when 10 drops are mixed with a tablespoon of coconut oil. This can be rubbed on the site of the psoriasis 1-2 times per day, particularly at night before you go to sleep, when the most healing in your body occurs.

This comprehensively useful oil is able to reduce inflammation of the skin in any form, including psoriasis. It helps to prevent infections and also eliminates redness and swelling, helping to eliminate the silvery caps of plaque on your joints and help clear your skin quickly. [5]

How to Use – You don’t necessarily need to dilute this oil, although people with sensitive skin should be cautious. Simply apply the oil to the affected area 1-2 times per day, until the flare-up fades.

Dry and itchy skin can often be the first sign of psoriasis, but these flare-ups can be avoided by quickly moisturizing the skin and soothing discomfort, which will help you avoid scratching. Chamomile oil has that anti-inflammatory ability, and can temporarily eliminate pain when applied. [6]

How to Use – Blending peppermint oil and chamomile oil is a popular at-home remedy for psoriasis. Both can be consumed internally, so no additional carrier oils are needed. Simply apply the mixture to the inflamed area as often as necessary until the red patch disappears.

Known as a powerful detoxifier for the skin and body, angelica oil is able to soothe the skin, keep it moisturized and eliminate any environmental toxins or pathogens that might exacerbate psoriasis symptoms. [7]

How to Use – Combine 5 drops of angelica oil with a tablespoon of olive oil and mix thoroughly. Then, massage this blend onto the site of your psoriasis rash and ensure that it all absorbs.

This essential oil is packed with compounds that can help treat psoriasis. As a mild astringent, it can help to heal skin cracks, while the antiseptic and anti-inflammatory properties will help eliminate redness, pain and possible pathogens that could infect the psoriasis patch. The antioxidants help to regulate the immune system and make flare-ups less common. [8]

How to Use – During particularly bad flare-ups of psoriasis, such as when the skin cracks or bleeds, be sure to topically apply 4-5 drops of myrrh oil, either undiluted or mixed with a small amount of jojoba oil.

Tea tree oil is beloved all around the world for its antibacterial, anti-fungal, antiseptic, anti-inflammatory and analgesic properties, among others, which makes it perfect for protecting serious psoriasis patches from infection, while also improving the appearance and eliminating the pain and itchiness. [9]

How to Use – Don’t use undiluted tea tree oil on your skin, as it can exacerbate the condition, but mix it with 1 tablespoon of coconut oil and then apply as needed until the redness and pain disappears.

This often overlooked essential oil has antiseptic and anti-inflammatory properties that can quickly stop a psoriasis flare-up from getting any worse. It can also protect the small, open sores on the top layer of a psoriasis patch from becoming infected, which can make the itching symptoms even worse. [10]

How to Use – You can add 10 drops of clary sage oil to a warm bath and then soak your inflamed areas in the tub, or you can mix the oil with warm water, soak a washcloth in the mixture, and then hold it pressed against the painful patches for 10-20 minutes, allowing the active ingredients to do their job!

Although using essential oils for psoriasis can help to ease inflammation and regulate the immune system response, essential oils are highly concentrated substances that can cause negative reactions. Some people have allergies to the source plants/herbs of the oils, and due to the potency of the active ingredients, other people with sensitive skin will have negative, inflammatory reactions to using these oils topically. Every oil is different, and can have different effects, so it is important to do your due diligence about potential negative reactions. You should also speak with your doctor before using essential oils to treat psoriasis symptoms.

Rate this article
Average rating 4.2 out of 5.0 based on 47 user(s).
Read This Next:
Popular Articles