Gin vs Vodka: Which is Better

Gin and vodka are both known to be two very distinct spirits. While the former is known for its herbaceous and floral flavor, the latter has no taste or odor whatsoever. In the debate of gin vs vodka, it can be easy to mix up these two clear liquors, but after taking a sip, you’ll be able to differentiate between the two. Let’s find out more.

There are many differences between the two alcoholic beverages, let us take a look at them in detail below.

What are Gin and Vodka?

They are both clear, grain-based liquors. 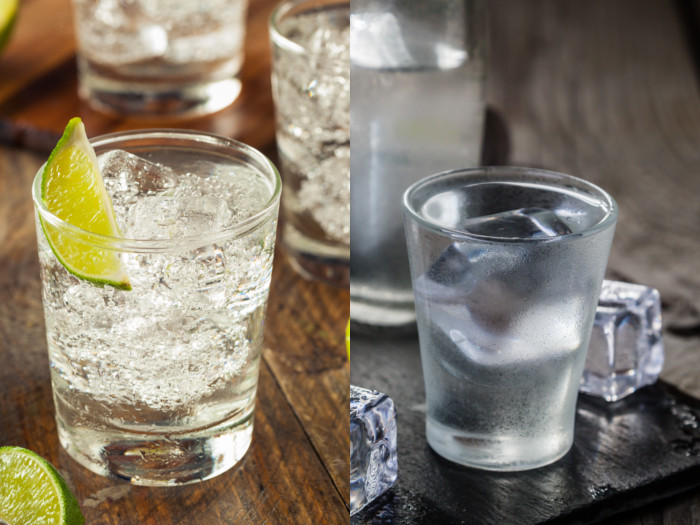 Both spirits are distilled liquors made from various grains and vegetables such as potatoes.

According to the USDA, 1.5 ounces of either gin or vodka contains roughly 100 calories, with zero carbs. [3]

Alcohol by volume (ABV) is the standard measure of alcohol content in any beverage, expressed as a percentage. Given the high alcohol content, both are typically served in small quantities. The alcohol content in vodka can range from 35 to 46 percent ABV, whereas gin’s ABV generally ranges from 35-40 percent. [4]

Distilled liquors such as gin and vodka are often preferred over beer or wine by people who are watching their calorie intake because of their low sugar and carbohydrate content.

Gin Vs Vodka: Which is Better?

Fans of gin might argue that gin is the healthier drink due to the added botanicals, but standard nutrition guidelines show that the two liquors are very similar. In terms of which liquor is stronger, that depends entirely on the brand and the country of origin.

Vodka: Vodka is one of the most popular spirits in the world because of its versatility in cocktails. Some of the most famous cocktails in the world mix vodka with tomato juice (Bloody Mary), orange juice (screwdriver), or vermouth (martinis). You can mix it with any other liquid, from sodas, sweet fruit juices to tonic water, creamy liqueurs, and regular water.

Gin: Due to its dry, herbal, and refreshing taste, gin lends itself well to cocktails too. It doesn’t have a sugary taste and thus goes well with fruit juices. The perfect combination is gin and tonic. Another classic combination is gin and cucumber. It also goes well with the addition of a mixer like lemonade or ginger ale. However, the best way to enjoy the drink is to have it neat.

Word of Caution: There are adverse risks associated with alcohol consumption. Intake of alcohol, if done in an excessive manner, can lead to short-term and long-term health risks such as alcohol abuse and addiction. According to the Centers for Disease Control and Prevention, people who should not drink alcohol include women who are pregnant, individuals younger than 21 years of age, and people who are recovering from alcoholism or cannot control the amount they drink. Also, it should be avoided by people who are planning to drive or any other activity that requires focus and skill. [5]

Rate this article
Average rating 3.2 out of 5.0 based on 22 user(s).
Read This Next:
Popular Articles