Honey and cinnamon are both nutritious foods and contain vitamins and minerals that help to maintain good health. They contain nutrients that include water, protein, fiber, sugar, vitamins, and minerals. Cinnamon also contains a very low level of fat. [2] [3] 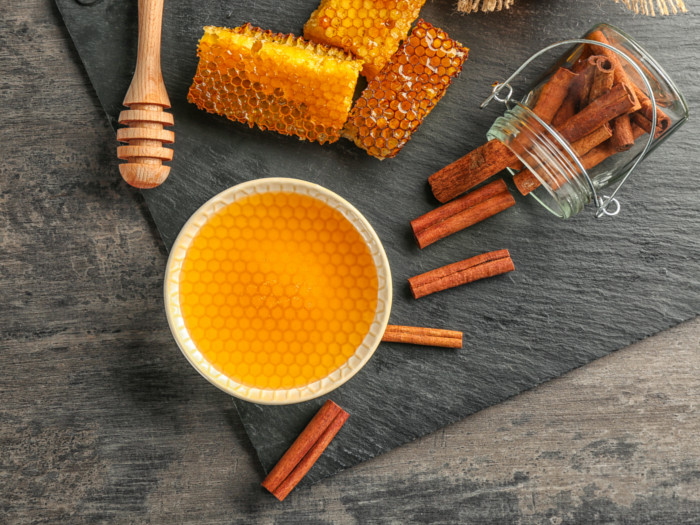 Minerals such as calcium, iron, sodium, potassium, magnesium, phosphorus, and zinc are found in honey and cinnamon. In terms of vitamins, they contain vitamin C, vitamin B6, folate, niacin, and riboflavin. Cinnamon also contains vitamins A, E, D, and K.

The health benefits of honey and cinnamon combination include the following: [4] [5]

Honey and cinnamon paste are good for boosting the immune system, eliminating chronic fatigue, and increasing the lifespan of people. It can also be used for treating colds and influenza. This is partially due to the antioxidants that may be found in both honey and cinnamon which can combine to combat the free radicals in the body’s organ systems. [6]

Cinnamon contains antioxidant flavonoids whose effect closely resembles insulin, which means that it can encourage glucose out of the bloodstream and into the cells where it is needed for energy. Honey, as a pure source of natural sugar, does not cause the fluctuation in blood sugar levels that many artificial sources of sugar do, and cinnamon’s effects, when combined with it, show a steady use of glucose by the body, and an improvement in type 2 diabetes, as per a study published in the American Diabetes Association in 2003. [7]

A paste made of honey and cinnamon is often used to treat insect bites and relieve inflammation at the source. Cinnamon is considered a possibly anti-inflammatory substance, while honey is an antiseptic and therapeutic component of many beauty and cosmetic products. Thus, their combination works on all aspects of skin irritation and insect bites at the same time, while simultaneously keeping you from developing infections. [8] [9]

Honey and cinnamon can help to increase the health and functionality of the digestive system. It can remove gas from the stomach and intestine and treat stomachache, excess flatulence, indigestion, and bladder infections. Regular consumption of cinnamon and honey will help in maintaining healthy digestion, which protects the gastrointestinal system from many serious conditions. [10]

Honey and cinnamon are beneficial in providing relief from arthritis. Regular intake of their paste helps to maintain bone health and relieves joint pain. You can also mix honey and cinnamon powder in warm water and enjoy the results. [11]

The benefits of honey and cinnamon extend to skincare as well, where minor skin infections and pimples can be treated with a simple application of the paste formed from these two precious foods. This can be applied to wounds or on the skin as a general spread due to its possibly anti-inflammatory, antiseptic, and antioxidant characteristics, which can reduce the appearance of age-related spots and wrinkles by reducing the impact of free radicals in the skin. [12] 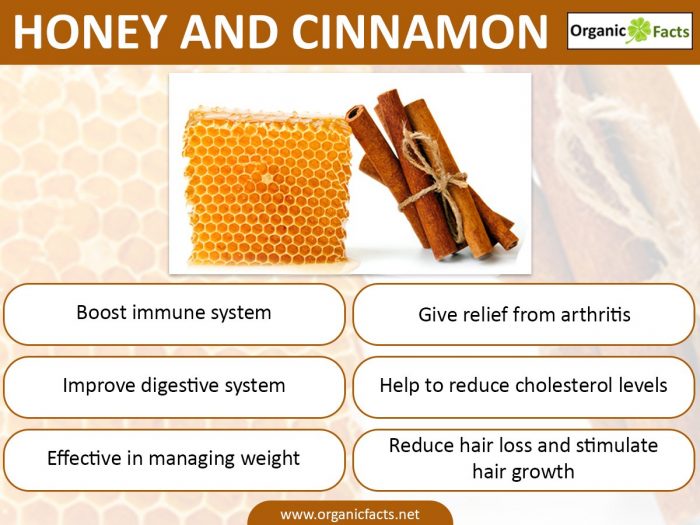 An infographic on home remedies for healthy weight loss

A mixture of honey and cinnamon in warm water is considered a good weight loss tool. Of course, like any other weight loss remedy, results are only seen when you combine it with a maintained diet and regular exercise. [14]

May Aid in Hair Care

May Aid in Dental Care

Both honey and cinnamon are individually used for dental care. A mixture prepared from the two is also used in dental care, particularly in eliminating bad breath and toothaches. [16]

It is also believed that honey and cinnamon may help in treating infertility in men, and hearing disorders, but more research needs to be done regarding those claims. Till then enjoy these benefits and get healthier!