The health benefits of soymilk are many, and they may include lessening the risks of cholesterol, cancer, and obesity. Soymilk may help improve cardiovascular health and reduce the risk of many postmenopausal problems. Also, the presence of high-quality protein and vitamins in soymilk makes it a beneficial part of a plant-based or a vegan diet.

Soymilk is a fat-free milk substitute extracted from soybean, which is a legume (also known as a member of the pea family). Soymilk, as well as other soy products, are traditional staples of Asian cuisine. Soy products may replace meat and non-vegetarian dishes given its high protein content, making them popular with those following a vegetarian or vegan diet. Soymilk may also prove to be a good source of protein for those who are lactose intolerant.

Soymilk can also be used to make tofu, which is a cheese substitute. Many choose soymilk because of its versatility and ability to be used as a milk replacement in recipes. It is generally available in chocolate and vanilla flavors for variety.

With the cost-effectiveness of soy and its increasing popularity in diets around the world, research studies are beginning to look at the other health benefits of this natural plant product. 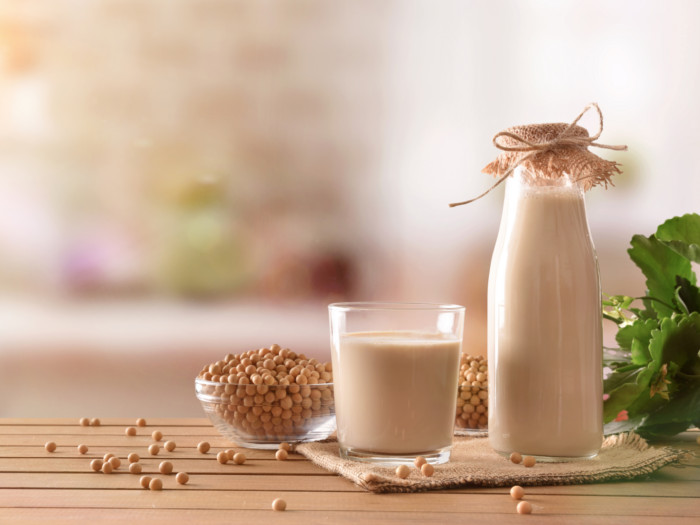 Unfortified soymilk, either original or vanilla, can be a good source of energy, protein, dietary fiber, and fat. It may also contain minerals, including calcium, iron, magnesium, phosphorus, potassium, sodium, and zinc. Various vitamins such as folate, thiamin, riboflavin, niacin, vitamin B6, vitamin B 12, vitamin D, vitamin E, and vitamin K are also found in soymilk. All these nutrients may help [2] in maintaining good health. It might also contain saturated, monounsaturated, and polyunsaturated fatty acids.

The nutritional value of soymilk may vary depending upon whether it is fortified. Though the protein content in soymilk is comparable to that of cows, other nutrients may be less present. Because of this, fortification of vitamins and minerals is a common practice in commercially produced soymilk products. Fortified soymilk contains calcium and other vitamins, making it a nutritious milk substitute for those eating a plant-based diet or for those with a dairy allergy. The protein content and isoflavones that may be present in soymilk, both fortified and unfortified, are phytonutrients, that might display preventive medicine benefits.

Health benefits of soymilk include the following:

Soymilk contains protein, which is essential for growth. Proteins are made of building blocks called amino acids, which have been shown to have a beneficial effect in preventing various health disorders. The amino acid and isoflavones content of soy protein may also help lower LDL cholesterol. Some studies have shown that consumption of soy isoflavones can reduce serum cholesterol levels in elderly men. Amongst type 2 diabetics, soymilk intake is associated with normal blood pressure. Thus, the intake of soymilk can be an effective way of improving cardiovascular health. [3]

Soymilk may provide some relief from postmenopausal issues. Studies suggest that soy isoflavones may help maintain estrogen levels in menopausal women. Intake of soymilk by post-menopausal women may assist in preventing maladies that may occur due to the natural loss of estrogen hormone. The antioxidant effects of soy isoflavones may further be beneficial in the reduction of certain chronic diseases, especially that of the cardiovascular system. [4]

May Provide Relief from Osteoporosis

Preliminary research indicates that soymilk may be beneficial in providing relief from osteoporosis in postmenopausal women. Often known as brittle bones, the loss of calcium may contribute to the risk of developing this disease. Osteoporosis is a risk for women in post-menopausal years of age. Studies have found that an animal protein diet may increase urinary excretion of calcium while a soy-based protein diet does not have this same effect. Increasingly soymilk is also fortified with calcium, so it could be said that soymilk may help in retaining and providing supplements to the body. Natural hormone replacement therapy with soy isoflavones may also improve retention of bone mass and density, and thereby reduce the risk of fracture in postmenopausal women. [5] [6] [7] [8]

According to research studies, serum estrogen levels, associated with breast cancer risk, may be reduced with the intake of soymilk. Post-menopausal women are at particularly high risk for breast cancer and may consume soy products for other health benefits of estrogenic replacement. [9]

A comprehensive study on the use of soy products has taken into consideration the results shown by the American Cancer Society and the American Institute for Cancer Research. This research suggests that it is safe for women to consume soymilk as the isoflavones in this variety of milk can work as anti-cancer agents. [10]

Results of a 2014 research study published in the peer-reviewed journal BJU International also suggest that consumption of soymilk may help lower the risk of prostate cancer because of the isoflavones present in soy. Despite the research in favor of soy for lowering breast cancer risk, study results are ultimately mixed. More research is needed to determine the true efficacy of soy in reducing breast cancer risk. [11]

May Act as an Antioxidant

The antioxidant effects of soy isoflavones may be beneficial against certain chronic diseases. Curdle soymilk or tofu has antioxidant and hepatoprotective properties, which can help in reducing oxidative stress and damage. A study suggests that it may be beneficial in preventing liver damage caused by oxidative stress. Further, the findings of another research suggest that the antioxidant properties of soymilk may help in increasing antioxidant capacity and reducing menopausal symptoms in women. [12] [13]

Intake of soymilk, rich in isoflavones, may help lower metabolic obesity in men, as well as post-menopausal women. In addition to this, it can help in reducing waist circumference amongst obese and overweight individuals. The hormonal effects of soy isoflavones may work to inhibit adipogenesis resulting in reduced enlargement of adipose tissue. Those who consume soy isoflavones may not only benefit from the adipogenic effect, but also from the LDL cholesterol-lowering effects that can help treat and prevent heart diseases.

In conclusion, the content of soymilk has many phytonutrients that can benefit against many different chronic diseases, especially for the aging population. Because of the natural phytoestrogens, menopausal women seem to reap the most when consuming soymilk as part of their daily diet. Soy isoflavones can work towards reducing cardiovascular risk and may help reduce obesity. While more research is needed to determine the exact benefits, overall soymilk and soy products appear to be beneficial.

Rate this article
Average rating 4.1 out of 5.0 based on 514 user(s).
Read This Next:
Popular Articles