Malaria is a deadly, widespread mosquito-borne disease that threatens people across the globe. It’s unimaginable how a little mosquito can infuse so much terror in the hearts of people globally, especially those who frequent tropical and sub-tropical areas of the world, where it is more prevalent. The causes of the disease may vary but primarily it spreads when the Anopheles mosquito that is infected by various types of parasitic microorganisms such as Plasmodium vivax, P. ovale, P. malariae, and P. falciparum bites you.

There is a very well established treatment for malaria, as it affects so many people in concentrated areas of the world, but excessive use of anti-malarial drugs has also become a problem in terms of drug resistance. For numerous reasons, people have identified and relied on various natural remedies for generations. On an average about a fifth of patients make use of traditional home remedies for malaria in endemic countries. Some of them include grapefruit, fever nut, citrus fruits, holy basil, orange juice, cinnamon, warm water enema, and ginger, amongst the others. [1] [2]

Most of the home remedies and herbal treatments lack the side effects of powerful antimalarial drugs, which make them far more appealing. So let’s take a closer look at 10 of the best natural remedies for malaria.

A common and popular treatment for malaria is the use of ginger; fortunately, ginger is easy to access and can be boiled down into a powerful decoction that will boost your immune system and help speed up the recovery process after an infection. Ginger’s active ingredient gingerol, and its unique hydrocarbons are known for their anti-inflammatory and antibacterial activities in the body, making it one of the most effective natural remedies. [3] [4]

Garlic is considered as one of the most versatile foods on the planet. It is laden with antioxidant properties that boost the health of the heart and helps in maintaining healthy blood circulation. Also, its most potent health benefits include the ability to enhance the body’s immune system.

A teaspoon of garlic juice can be mixed with a teaspoon of sesame oil and about 10 drops of it can be applied on the tongue of the patient every hour before the fever. The use of this mixture continuously for about four days may provide relief from malaria. Applying the garlic juice on the nails of fingers and toes before the occurrence of the fever can also provide relief. [5]

There is a powerful substance found in grapefruit, similar to quinine, which has been directly linked to neutralizing malaria-inducing parasites. You can extract this substance for a concentrated dose or simply add some delicious grapefruit to your diet. Grapefruits are widely available in tropical areas and can do wonders in promoting overall health and rapid recovery. [6] 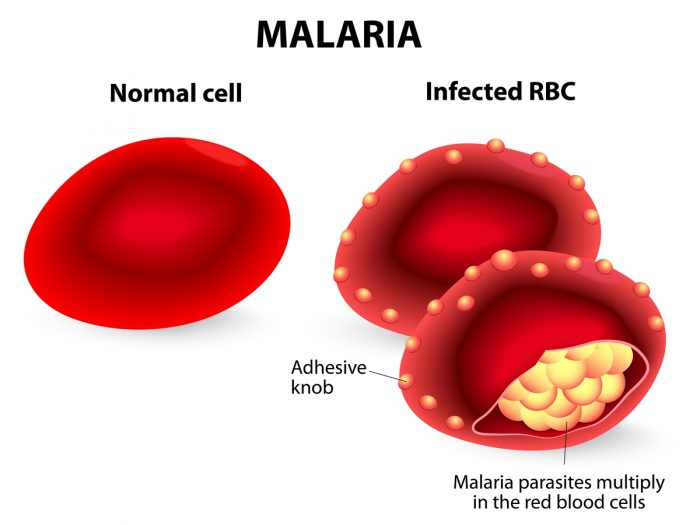 Malaria is a mosquito-borne disease caused by a parasite. Photo Credit: Shutterstock

One of the best ways to get rid of malaria is to tackle its symptoms, namely fever, headache, and diarrhea. Cinnamon is a comprehensive remedy, as it can help improve multiple symptoms at the same time. Cinnamon has a powerful organic component, cinnamaldehyde, which has anti-inflammatory properties and has been associated with a reduction in malaria’s violent and painful symptoms. Mix a teaspoon of powdered cinnamon with a dash of pepper and few drops of honey to a glass of water and drink. [7]

Although this is a rather vague suggestion, citrus fruits, in general, are often recommended for the treatment of malaria. Limes and lemons are easy to get a hold of in many malaria-prone regions, and the antioxidant compounds, vitamins, and minerals present in them can help eliminate fever, prevent the spread of the infection, and speed up the healing process. Mixing a few drops of lime and an entirely squeezed lemon into a glass of water is a popular approach. Even better, just take a bite of those healthy fruits to get the goodness of fiber. [8]

Fever nut is a popular herbal remedy in India and surrounding countries, as the seeds of this nut contain powerful active ingredients that can help break your fever and boost the immune system. When a fever breaks, it is essentially the first step towards recovery, and fever nut (as its name implies) has been helping people survive against malaria for hundreds of years. [9]

To reduce the symptoms and severity of malaria, people have turned to holy basil for many years; eugenol is its active ingredient, and is largely responsible for its therapeutic properties, helping to eliminate bacterial infections. Different parts of this plant are used for dozens of Ayurvedic remedies, making it extremely important in Asian countries that deal with many cases of malaria. [10]

Vitamin C is known as an incredible immune system booster and this has certainly proven true in the treatment of malaria. Since it can be difficult to keep away from food while suffering from malaria, many people choose to go on a water and orange juice diet, to keep the body hydrated and promote a concentrated attack on the infection. The antioxidant and immune-system boosting effects of vitamin C are often enough to kick-start the recovery process. [11]

The best way to treat malaria is to never catch it in the first place, but to avoid mosquitoes in the tropical world is difficult, to say the least. Powerful bug spray (specifically those good for mosquitoes) and other repellents such as creams are essential if you’re spending any time in the wilderness of these risky areas. Undertaking insecticide treatments can also be a wise idea! Furthermore, you should add mosquito netting to your bed and windows, so you can sleep peacefully, knowing that you won’t wake up with any symptoms of malaria. You should also ensure that there are no large pools of standing water near your home, as they are the perfect places for mosquitoes to lay their eggs. Wear light-colored full sleeve clothes that cover most parts of your body especially the exposed areas such as hands and legs to prevent mosquito bites. Keep the indoors of your home i.e. (windows and doors closed during the evening hours as that is the time when mosquitoes enter the home and hide in the dark corners of the house. If you’re a plant lover, having rosemary and marigold may be a good idea as these plants have a strong aroma that can keep the mosquitoes at bay. [12]

After you get past the liquid flush diet and have your immune system back in action, you should switch to a purely natural diet of fruits for some time. This constant burst of natural fiber and vitamins, as well as the antioxidants present in the fruits, will help you recover from illness and get back to living normally. Drinking buttermilk may offer relief from malaria with paroxysm on every fourth day. [13]

Finally, adding fruits, vegetables, grains, and nuts is the final phase of a natural malaria diet.

Rate this article
Average rating 3.9 out of 5.0 based on 709 user(s).
Read This Next:
Popular Articles