For thousands of years, people have been drinking tea to help treat digestion and other stomach-related issues, including constipation. One of the common ways to treat constipation is to take laxatives. Laxatives can be taken orally in the form of over the counter medications and liquids, or through the rectum in the form of enemas and suppositories. Speaking about oral laxatives, herbal teas are a great natural remedy. What are they and how much of it should we consume? Let us find out.

What are Laxative Teas?

Laxative teas are a remedy to help a person alleviate bloating and empty their bowels. They are usually consumed to relieve constipation. Constipation is described as a common complication that results in infrequent bowel movements and difficult passage of stools. A low-fiber diet, insufficient intake of water, lack of exercise, certain medications, dehydration, and a sudden change in routine are some of the major causes of this condition. The teas that are known for their laxative properties include senna, peppermint, smooth move, ballerina, marshmallow, parsley, chamomile, licorice, black, and green tea, to name a few. Let us take a look at them in detail.

Senna is a perennial, small, under-shrub whose leaves and pods are used to make senna tea, which acts as a great laxative. According to a report published in the Journal of Pharmacognosy and Phytochemistry, the senna leaves and pods contain glycosides that fuel the digestive system and help relieve constipation. It is said to alleviate constipation by regulating the sodium and potassium levels in the body that help maintain the fluid balance. This is quite a potent tea and must be consumed in moderate quantities. [1] 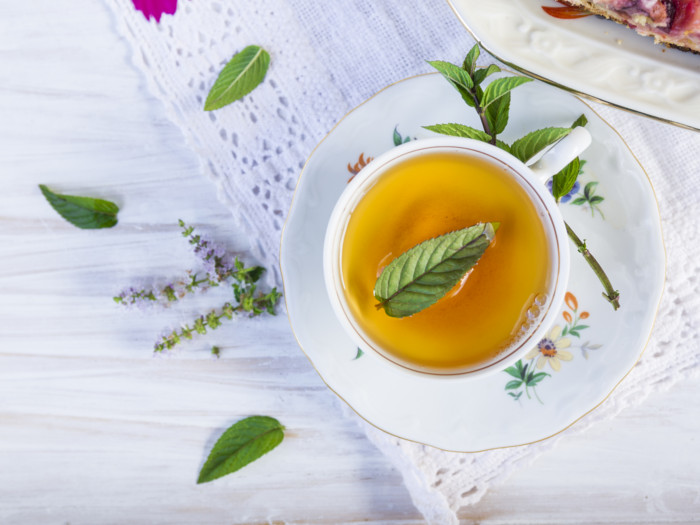 Add a leaf of peppermint to your tea for freshness. Photo Credit: Shutterstock

When it comes to bloating, stomach aches, irritable bowel syndrome, and constipation, peppermint tea is a natural remedy. According to a paper titled, ‘Peppermint and its Functionality: A Review’, published in the iMedPub Journal, peppermint tea contains menthol which helps soothe the stomach and provides relief from all sorts of gastrointestinal problems.  [2]

It is also important to note that too much consumption of calcium can cause an upset stomach, nausea, abdominal pain, vomiting, and constipation. Peppermint tea acts as an inhibitor for calcium channel activity in the intestines. Thus, drinking a cup of peppermint tea daily, preferably after dinner, is likely to benefit people with constipation.

Dandelion tea is known to be a gentle laxative. The liver plays an important role in the digestive system as it processes the nutrients absorbed from the small intestine. According to a 2016 report published in the Journals of Applied Pharmaceutical Science, dandelion tea is used to help the liver stimulate the bile that ensures proper digestion. This means that a daily cup of dandelion tea after your meal can indirectly help in preventing constipation. [3]

Constipation is usually the effect of poor digestion and the rhizomes in ginger root seem to be a great natural remedy for it. It is known to have mild laxative potential and is used to regulate bowel activity. According to author Phyllis Balch’s book, Prescription for Herbal Healing, you need to add 1 gram or 2 teaspoons of powdered ginger root to a cup of boiling water to prepare ginger tea. For those suffering from constipation, the book recommends consuming a cup of ginger tea, two to three times a day, to regulate the bowels. However, it is always better to consult a doctor for the right dosage and consumption. [4]

Marshmallow root tea is used to treat gastric issues. Its laxative properties are derived from its mucilage, which is a sap-like substance rich in antioxidants. According to the book, The Good Living Guide to Medicinal Tea by author Jennifer Browne, marshmallow root forms a protective coating over the digestive tract, which could help prevent ulcers and constipation. A cup of marshmallow tea at the end of the day would be recommended for someone suffering from constipation. [5]

Licorice root is known for its strong anti-inflammatory properties that aid in treating a number of gastric related issues, including constipation. Thus, a cup of licorice root tea daily after dinner should help stimulate digestion and regulate bowel movements. [6]

Unlike the other teas in this list, ballerina tea is a herbal infusion and not a traditional tea. It is made by adding senna (Cassia Angustifolia) with Chinese mallow (Malva verticillata), both known for their laxative properties. Drinking this tea detoxifies the body of all the toxins and excess water. Too much of it can cause laxative abuse and excessive weight gain after you stop having the tea altogether.  [7] [8]

This tea, which is made from parsley seeds, is a traditional remedy for indigestion and other gastric issues. According to a study published in the Phytomedicine Journal, parsley contains some potent oil that is more present in the seeds than in stems or leaves, which when consumed in the form of tea help to relieve constipation and other digestive issues. [9]

Traditionally, chamomile tea is used for several gastrointestinal conditions, which include colic, spasms, digestive disorders, flatulence (gas), stomach pain, ulcers, and other gastric problems. According to a 2015 research paper published in the Scholar’s Research Library, chamomile tea has anti-inflammatory properties that help to reduce spasms and inflammations in the gastrointestinal tract, which could ease digestion and eventually alleviate constipation. A cup of chamomile tea at the end of the day should help stimulate bowel movement if you are suffering from this condition. [10]

Smooth move tea is a combination of different herbs and spices and is sold as a natural laxative. The tea is a blend of senna, licorice, ginger, cinnamon, orange, bitter fennel, and sweet orange. It is known to ease your bowels and significantly reduce the chances of cramping. The laxative component in the tea helps to soothe bowels and relieve you from bloating, making you feel lighter. [11]

Apart from these teas, many people like to drink black or green tea first thing in the morning to regulate their bowel movements. These teas contain caffeine, which has a laxative effect on many people.

Word of caution: These beverages tend to be very strong and it’s always advisable to consult a medical practitioner on the quantity and frequency of their consumption.