Replacing nutmeg in a recipe is easier than you think, as there are many different nutmeg substitutes out there in the culinary world. Nutmeg is a warm and earthen spice that is popular in a huge variety of global cuisines and dishes. However, despite being rather distinct, the effect that it has on food can be replicated by any number of other herbs and spices. Whether you have run out of nutmeg before making brownies or you’re entertaining someone with a nutmeg allergy, seeking out nutmeg substitutes is a simple solution, provided you understand their potential flavor profiles and potencies. [1]

The best substitutes for nutmeg include aniseed, cardamom, chili powder, mace, saffron, and turmeric, among others.

Allspice is named so because it’s taste is actually a blend of three spices – cinnamon, cloves, and nutmeg. It is popular for a variety of sweet and savory foods. Allspice not only includes a portion of nutmeg but also two other complementary spices, making it one of the best nutmeg substitutes available. [2]

The licorice-like flavor of aniseed is a good replacement for the musky sweetness of nutmeg. In desserts and sweeter dishes, you can use aniseed as a slightly different, but equally delicious, ingredient. [3]

Ginger, nutmeg, allspice, and cinnamon make up this relatively modern spice blend. Able to be included in many autumnal foods – both sweet and savory – it is most famous for its connection with pumpkin pie. However, using a pinch of this will add small amounts of nutmeg, along with other complementary spices. [4]

Similar to cumin in its replacement powers, a small punch of cajun spice can give your dish a similar kick as nutmeg, but is not recommended for sweet recipes.

This sweet and spicy option as a nutmeg substitute is ideal for baking. Cinnamon possesses a warm and recognizable flavor, but when used in smaller concentrations, it can mimic the taste and effect of nutmeg in sweet dishes. Only use half as much cinnamon as you would nutmeg, due to cinnamon’s significantly more potent flavor. [5] 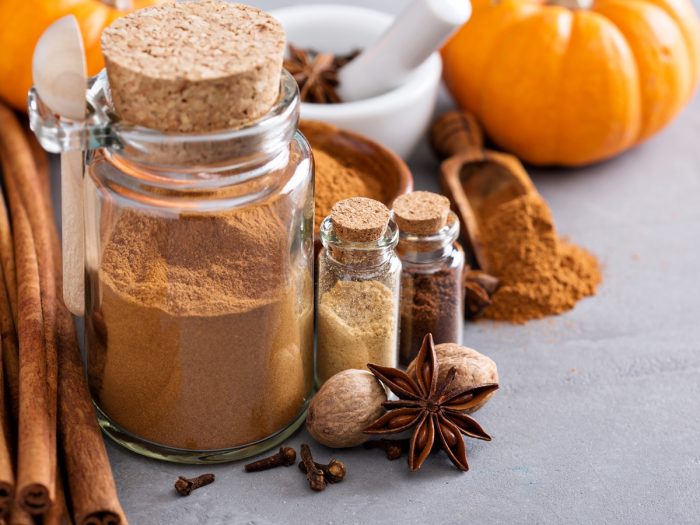 Spices have been an integral part of our food since centuries. Photo Credit: Shutterstock

Although nutmeg is usually considered sweeter than cloves, they both have a similar earthy, peppery bite to them. While using cloves can change the flavor profile of your dish slightly, the overall effect won’t be unpleasant, and even a perceptive palate won’t notice the difference. [6]

Cumin may be commonly associated with Indian or Mexican food, but its unique flavor makes it a viable nutmeg substitute as well. The end result may be a bit spicier, and less sweet, the two spices share enough similarities for the switch to work. [7]

If you are really in a bind, you can use dried ginger in place of nutmeg. While the former has a distinctly more powerful bite than nutmeg, it can help to season certain savory dishes. Use 1/2 teaspoon of dried ginger for every teaspoon of nutmeg called for in the recipe. [8]

This is a different spice from nutmeg, but it is made from the same tree, which gives it a surprisingly similar characteristic in many different meals. If you are looking for a good replacement for nutmeg, this may actually be your best bet, as it is the closest option to the real thing! [9]

This replacement will be a much more potent flavor, leaning towards the savory and astringent side. However, in non-dessert meals, mustard can provide the refreshing bite of nutmeg. [10]

Use a very small amount of saffron to replace nutmeg, as it is significantly spicier. Fortunately, when using this in an either a sweet or savory recipe, it is difficult to tell the difference. [11]

Bearing some of the same active ingredients and capable of providing the same health benefits, turmeric may leave your food a slightly different color, but the flavor profile won’t be too different, as they both share an earthy, woodsy taste. [12]

Rate this article
Average rating 2.7 out of 5.0 based on 8 user(s).
Read This Next:
Popular Articles