Buckwheat is a nutrient-rich, gluten-free plant source, which may boost heart health, reduce blood pressure, aid weight loss, and help manage diabetes. It can also help improve digestion and strengthen the immune system. Its impressive range of proteins, minerals, and antioxidants help in skin and hair health, elimination of gallstones, protection from asthma attacks, and relief from constipation and other intestinal conditions.

Buckwheat, despite what its name suggests, is not a cereal or a wheat product. It is a fruit seed that comes from the buckwheat plant, also commonly called the beech wheat plant, and is related to rhubarb. While it is a seed, it is mostly used as a grain because it is low in calories and abundant in complex carbohydrates and fiber. Because buckwheat is a nutritious gluten-free pseudocereal, it has risen to such importance in recent years due to the increased awareness of gluten allergies and people with celiac disease. Buckwheat belongs to the Polygonaceae family of plants and was originally thought to have been cultivated in the Balkan region of Europe, slowly spreading to Southeast Asia, and then gradually throughout the Asian continent over the past 8,000 years. There is another species variation of the plant that is found in the Himalayas. Hulled kernels are called groats, while the roasted variety is known as kasha and is a staple food in Eastern Europe. The kernels are pale tan to dark brown and have a subtle flavor that becomes earthy and nutty when roasted. Also, a study by Ohio State University found that buckwheat flour can help improve diabetes, obesity, hypertension, hypercholesterolemia and, constipation. [1]

Buckwheat contains high-quality protein that delivers all of the eight essential amino acids, including lysine, which is usually lacking in grains. The gluten-free grain also contains two powerful flavonoids which act as antioxidants, rutin, and quercetin. It is very rich in vitamins and minerals such as riboflavin (B2), niacin (B3), copper, magnesium, phosphorus, zinc, and manganese, as per the USDA National Nutrients Database. [3]

Let us look at the most important health benefits of buckwheat.

One of the most important qualities of buckwheat is its high levels of phytonutrients, particularly flavonoids. These important compounds act as antioxidants within the body, which seek out and eliminate dangerous free radicals, the chemical byproduct of cell metabolism that is known to cause heart disease. Rutin is one of the most important flavonoids found in this seed. A Harvard School of Public Health report said that flavonoids lower the amount of LDL (bad) cholesterol in the blood, and keep platelets from clotting, which can lead to atherosclerosis, heart attack, and stroke. Rutin also increases the level of HDL (good) cholesterol, which further reduces the chances of cardiovascular disease. [4]

Buckwheat has lesser calories compared to wheat or barley, is free of saturated fat and cholesterol, and high in fiber and protein. The Berkeley Wellness Letter lists buckwheat as one of the gluten-free options for people who cannot digest wheat. This is a powerful combination that helps in suppressing appetite, regulating blood sugar, improving digestive health, and building lean muscle. [5] 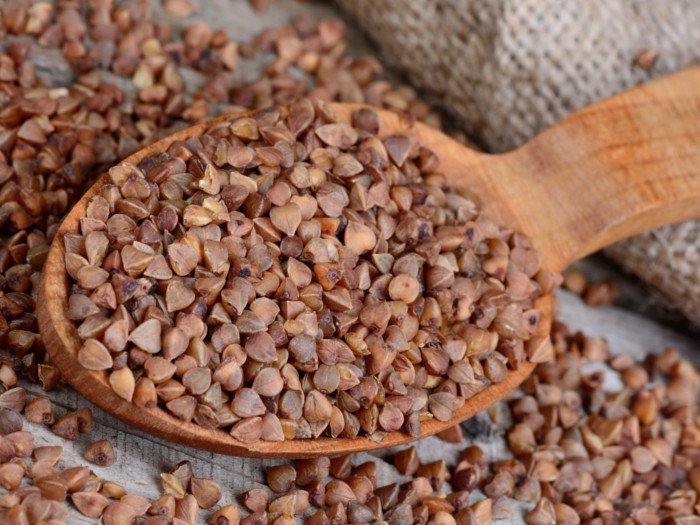 Buckwheat is available throughout the year and can be served as an alternative to rice or made into porridge. Photo Credit: Shutterstock

Buckwheat hull may help reduce the risk of cancer, according to a study by Kim SH et al., 2007. Furthermore, the fiber in buckwheat can reduce your chances of more serious gastrointestinal issues, even colon, gastric and breast cancer. A single cup of buckwheat has more than 20% of your daily fiber recommendation and has almost no calories. Recent studies about dietary fiber showed that it has powerful anti-carcinogenic effects, primarily on the development and metastasis of breast cancer cells in postmenopausal women. A study conducted with Swedish women volunteers showed that there was a 50% reduction in breast cancer frequency in women who regularly consumed the recommended amount of daily dietary fiber. There are also plant lignans in the seed which are converted in our stomachs into animal lignans. Animal lignans are integral in the defense against breast cancer and other hormone-based cancers. [6] [7] [8] [9] [10]

Buckwheat is one of those valuable plant-based foods that contain high-quality proteins, meaning that it has all eight essential amino acids, including lysine. High-quality proteins are vital to many functions in the body, so food containing complete proteins not only replaces the need to eat red meat (priceless for vegetarians and vegans) but also gets the benefits from those proteins faster. Some of the benefits that complete proteins have are their ability to help you lose weight by helping you feel full faster. They provide extra energy boosts and studies have shown that they increase cognitive ability. Finally, they help slow down the natural decrease in muscle strength and mass, called sarcopenia. Studies have shown complete proteins help people dramatically slow down the loss of bone and muscle mass, lending greater strength, durability, and endurance during physical activity. [11]

Buckwheat has a high level of fiber, which adds bulk to your bowel movements, helping to move them through the digestive tract, and stimulating peristaltic motion, the muscle contraction of your intestines. It can also help reduce irritable bowel syndrome (IBS) and diarrhea. [12]

People with diabetes who are unfamiliar with buckwheat now have another tool in the complex and constant management of the disease. It is a rich source of D-chiro inositol, a compound that reduces blood sugar. The high amount of fiber in buckwheat also helps in diabetes management. A report published in The New England Journal of Medicine suggests that dietary fiber significantly lowers the amount of blood sugar. It does so very quickly as well, sometimes in as little as 1-2 hours. [13] [14]

Buckwheat has a long list of attributes, and its impact on the immune system is one of the most important! Buckwheat has antioxidant components such as tocopherols, phenolic acid, selenium, and flavonoids, which are excellent at finding and eliminating free radicals. They boost the activity of other antioxidants like vitamin C and protect the organ systems. [15]

Buckwheat is rich in insoluble fiber, which also means that it greatly decreases the chances of developing gallstones. Insoluble fiber not only increases the transit time of food through the digestive tract but also reduces the need for the excess secretion of bile acids.

The magnesium and vitamin E levels in buckwheat are both strong enough to say that buckwheat protects children from developing asthma. Studies done in the Netherlands show that children who don’t receive high levels of grains or grain-like foods are much more likely to develop asthma because they are deficient in certain anti-inflammatory nutrients, like vitamin E and magnesium. [16]

Buckwheat is rich in selenium and zinc, both of which are essential trace minerals that the body needs for strong bones, teeth, and nails. [17]

Buckwheat is very high in iron content, and this is one of the key components in the formation of red blood cells. A deficiency in iron can lead to anemia, which is a complicated condition characterized by fatigue, cognitive slowness, headaches, and even other, more serious side effects. [18]

The high rutin content in buckwheat acts as a natural sunscreen and protects the skin from the damaging effects of the sun. The rich blend of antioxidants and flavonoids also help in preventing signs of aging, like fine lines and wrinkles. Magnesium found in buckwheat boosts blood circulation and gives the skin a radiant glow. [20] [21] [22]

The whole-grain complex carbohydrate content in buckwheat is helpful for hair growth. Rich in vitamin A, B-complex vitamins, and zinc, it is an amazing food for hair.

How to Buy, Store, and Eat Buckwheat?

You can purchase buckwheat from your local supermarket.

Keep buckwheat in airtight contains, away from moisture and heat. The flour is best kept refrigerated. If stored correctly, buckwheat groats will stay good for up to a year, and the flour will have a shelf life of several months.

Here are a few tips for serving this gluten-free grain:

Word of Caution: Since buckwheat is not a wildly common crop in some parts of the world, you may have never encountered it before and have an unknown allergy to it. Some people can also develop an allergy to buckwheat after prolonged exposure. The allergic reactions can range from a runny nose and some intestinal discomfort to anaphylactic shock and death.

Rate this article
Average rating 4.0 out of 5.0 based on 106 user(s).
Read This Next:
Popular Articles