If you need to replace coriander for any reason, search your spice racks for caraway seeds, cumin, curry powder, dukkah, garam masala, oregano, sage, fennel seeds or fresh cilantro leaves. These coriander substitutes not only have similar flavors, allowing them to sub in rather easily for cooking purposes, but they also share some of the same health benefits. Given that this spice has often been used in traditional medical applications, this overlap of potential health effects is important when choosing an adequate replacement.

Coriander, commonly known as cilantro in America and some parts of Europe, is an aromatic herb of the parsley family. Both, the seeds and leaves of coriander (cilantro), are used for culinary purposes. Let’s take a look at the different forms of coriander used in recipes:

Coriander possesses dietary fiber, potassium, phosphorous, zinc, vitamin A, E, C and K, and numerous B-family vitamins. It is also rich in other minerals like calcium, iron, copper, and magnesium. The versatile nature of this spice in cooking is only matched by how many different health applications it has, from digestive health and blood pressure to the immune system, bone strength and the prevention of chronic disease. Fortunately, there are some excellent options to use as a substitute for coriander. [1] [2] 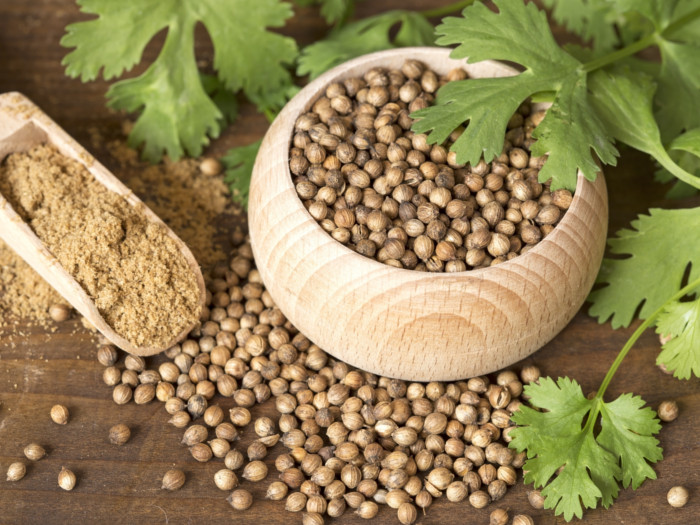 With nearly the same flavor profile as coriander, many people recommend caraway seeds as one of the best coriander substitutes. They share the earthy, warm and aromatic flavor of coriander, and even have an underlying citrus taste when consumed. This could be explained by the fact that they belong to the same family of herbaceous plants. Caraway seeds are a bit more potent, so they should be used sparingly, and you will likely need fewer caraway seeds than coriander to achieve a similar flavor. [3]

This might be the most reliable replacement for coriander, provided you aren’t trying to mimic too many of the citrus undertones of the spice. When it comes to earthiness, few things are better than cumin, and it is common to find this spice in both Indian and Mexican cuisines. You can use less cumin (3/4) than the amount of coriander that a given recipe recommends. Cumin also delivers similar health effects, with a reputation for aiding digestion, preventing oxidative stress, lowering inflammation, and increasing nutrient absorption in the body. [4]

When cooking an Indian dish, curry powder can often be an effective substitute, although it should not be used in the same quantities. Curry powder is a potent and pungent flavor that can pervade an entire dish, so the recommended amount of coriander should be cut in half. Also, remember that curry powder contains turmeric, which will add a different color and a slightly different flavor to your meal. Nutritionally, curry powder is quite similar, with the ability to boost bone growth, lower inflammation, and protect the immune system. [5]

This popular Indian spice mix actually contains coriander inside it, making it an obvious choice for a replacement, and it does maintain a spicy, earthy and nutty tone when added to dishes. However, depending on what type of meal you are making, the other herbs in this spice mix could overpower the flavors. Be conservative in your use of garam masala as a substitute for coriander, although in terms of health benefits, it also improves digestive health, boosts the immune system, and increases the body’s ability to absorb nutrients. [6]

Given that coriander comes from the same plant as cilantro leaves, many people naturally assume that these fresh leaves will be an adequate replacement. However, cilantro tends to have a cooler and slightly less spicy flavor than coriander and is an herb that people tend to either love or loathe. If you are one of the former, use a similar amount of cilantro as you would the seeds from the same plant, and you should have a relatively similar flavor in your meal. [7]

Coriander has a peculiar flavor that is difficult to match, but there are undeniable citrus tones beneath the earthy, nutty exterior. If you are a fan of this zesty aspect of coriander, then oregano may be your best option as a substitute. When cooking Mexican food, oregano works particularly well in the spot of oregano, and it will be very difficult to tell the difference. Oregano also contains a number of the same minerals as coriander, including iron, calcium, and manganese. 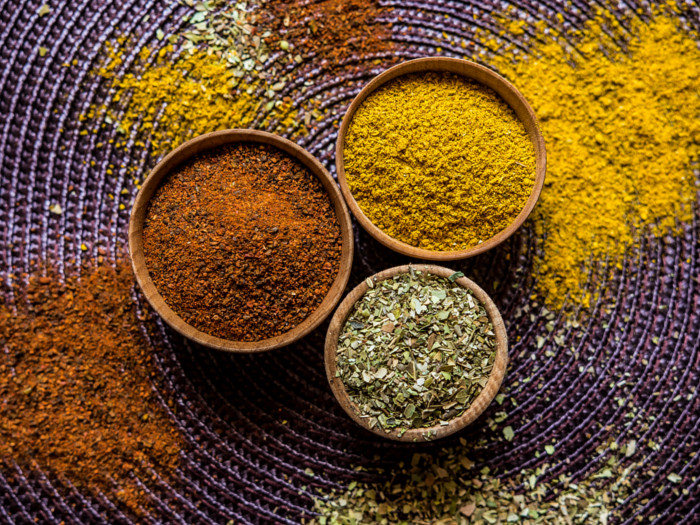 A collection of spices that enhance the flavor of the food. Photo Credit: Shutterstock

In a similar way to oregano, sage reflects the lighter and zestier side of ground coriander. When looking for a slightly cooler flavor, or a more subtle replacement for coriander, turn to this popular option. Sage also possesses many of the same vitamins and minerals as coriander, so its health effects are very much in line.

Some people enjoy the slight licorice sweetness of fennel seeds, in combination with the earthy flavor that this spice provides. This means that it can occasionally be a substitute for coriander, depending on the dish. Fennel seeds are better as a replacement when it comes to sauces, soups, and curries, and should be used sparingly, as the flavor can be quite strong in a dish. In terms of health effects, fennel is also very good for reducing excess flatulence, improving digestion and eliminating inflammation. [8]

If you are looking for a substitute for fresh coriander leaves (cilantro), your best bet would be an equal amount of fresh parsley, tarragon, basil, dill, or a combination of the three herbs.

Rate this article
Average rating 4.3 out of 5.0 based on 40 user(s).
Read This Next:
Popular Articles